The hotel chain is scoring big with its loyalty program.

Marriott has been a best-of-breed hotel operator, and the results for the third quarter, released in early November, validated investors' confidence. Despite missing earnings estimates, Marriott showed much better growth than its peers in revenue per available room (RevPAR), and management issued a positive outlook, helping send the shares higher. 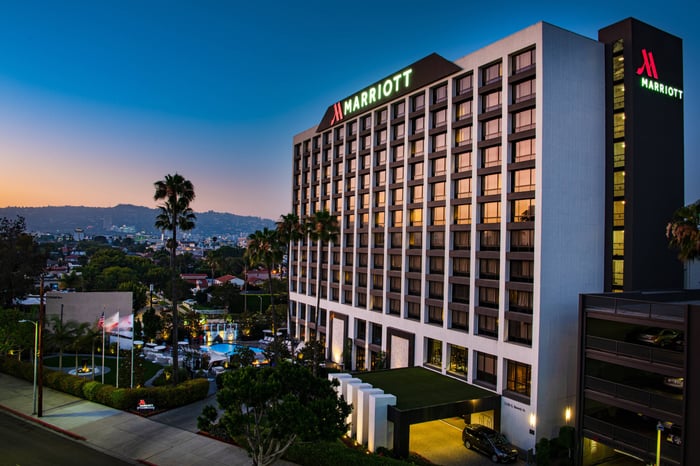 Adjusted earnings per share were $1.47, slightly lower than the $1.49 that analysts expected. But it was a messy year-over-year comparison, given that year-ago earnings included $0.26 per share in asset sale gains. Investors were apparently more impressed with the company's performance on the top line.

The main factors contributing to Marriott's strong quarter were the Bonvoy loyalty program and the synergies from the 2016 Starwood acquisition. Membership for Marriott Bonvoy reached 137 million in the quarter. This is a key driver of revenue, since members tend to be repeat customers. It's proving to be an important competitive advantage because loyalty members help generate revenue that might otherwise go to a competitor.

Marriott reported that the addition of Starwood has "enhanced guest satisfaction." It has also unlocked tremendous value. Management has sold over $2.2 billion worth of assets since the acquisition, including the recent sale of the St. Regis New York for $310 million.

That cash is going back to shareholders. Management expects to return $3 billion by the end of the year through dividends and share repurchases.

The company expects the recent trend to continue into 2020. For the fourth quarter, it's calling for growth in RevPAR (adjusted for currency rates) in a range of 0% to 1% in North America. Internationally, it's expected to be up about 1%, bringing worldwide growth to 1% as well.