Shares of Conn's (NASDAQ:CONN), a specialty retailer of furniture, related accessories, and home appliances, among other products, declined just over 30% during early Tuesday trading after the company released mixed third-quarter fiscal 2020 results.

Conn's third-quarter revenue checked in at $377.71 million, a 1% increase compared to the prior year but well short of analysts' estimates of $394.29 million. The disappointing top line didn't ruin bottom-line results, however, with third-quarter adjusted earnings per share of $0.61, compared to analysts' estimates of $0.54 per share. Digging beyond the top- and bottom-line figures, there were additional takeaways including the company's impressive credit spread. Norm Miller, Conn's chairman and CEO, had this to say a press release:

For the first time in five and a half years, Conn's produced positive credit segment income before taxes, primarily as a result of a third quarter credit spread of 1,070 basis points. This is a significant milestone for the company and validates our 1,000-basis point credit spread operating strategy. Our credit model is the foundation of our overall business and enables our unmatched value proposition for our core customer, while providing us the flexibility to support our retail growth strategy. 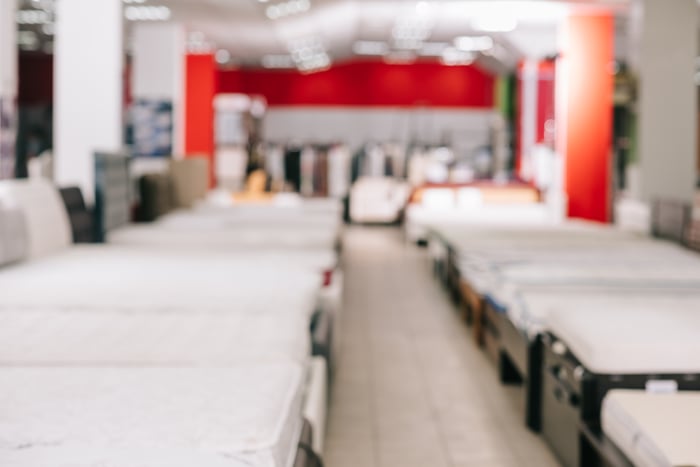 As impressive as the credit spread was, Conn's same-store sales result was equally unimpressive. Conn's third-quarter same-store sales declined 8.4%, driven by underwriting adjustments and an unfavorable consumer electronics environment. Adding to the impact of declining same-store sales was price deflation for large-screen televisions, as there was an increase in large-screen production, which not only lowered average transaction prices but also made it more possible for consumers to purchase televisions at competing stores. Management's near-term challenge will be to support its credit spread and to do so at less of a cost to its same-store sales -- something it wasn't able to do so well during the third quarter. Time will tell if management can offset same-store sales pressure felt during the third quarter, but today's roughly 30% stock price decline paired with fourth-quarter guidance for a 12% to 16% decline in same-store sales suggests a reversal won't be immediate. If you need other consumer stock ideas while Conn's attempts to turn things around, it's a large industry worth learning about.