At a time of year when gift-giving revolves around children, the opening of Disney (NYSE:DIS) stores in certain Target (NYSE:TGT) locations and as part of Target online is sure to lure parents and kids, especially with Frozen 2 in theaters and Star Wars: The Rise of Skywalker set to open Dec. 20.

Wall Street already called Target one of Black Friday's winners, with Bank of America noting toys as a top item fueling its gains. Of course, Disney products aren't new to Target, but let's take a closer look at why this fall's launch of the mini-stores and online shop will offer the retailer an extra boost around the holidays. 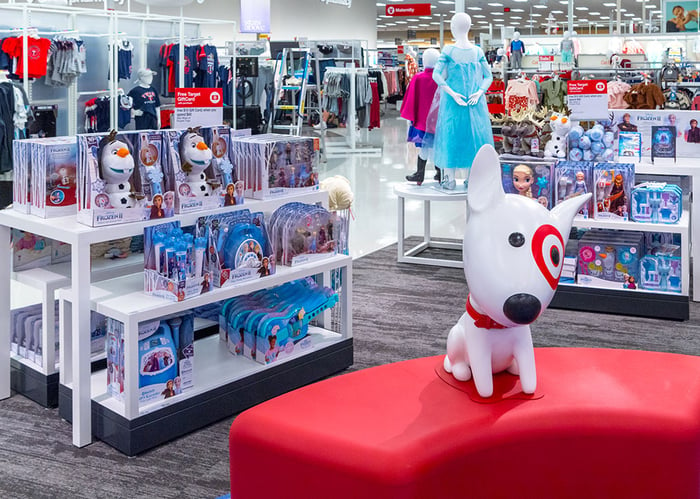 Blockbusters have a proven record of leading to merchandise sales. In 2014, with excitement over the original Frozen at a high, merchandise from the movie dethroned Mattel's Barbie as the top holiday toy for girls, according to the National Retail Federation. A year later, with a new Star Wars movie in theaters, Star Wars toys (produced under license by Hasbro) became the second-most-purchased item for boys. Add the fact that movie-related merchandise makes up a huge part of the global licensing market, and you've got a clear reason to believe that Frozen 2 and Star Wars gifts will be in just about every stocking this year. The entertainment/character segment represented more than $122 billion, or nearly 44% of the entire global licensing market in 2018, according to Licensing International.

The Disney store at Target isn't about a bunch of shelves stacked with products. Shoppers can count on a Disney experience, including interactive displays, music, and even an area where tired guests can sit down and watch ... guess what? Disney film clips. Visitors can also try on Mickey's magic hat or a princess crown. Target and Disney have made the shops a destination and are focusing on fun for families, the customer base they aim to win over this season. According to a report by PricewaterhouseCoopers, more than 60% of people consider a unique customer experience important, and more than half consider a fun experience important.

Through the e-commerce site and the in-store shops, Target now sells a total of 450 Disney products, including 100 that previously were only sold at Disney stores. But it gets even better. Target also is selling "Target Exclusive" merchandise. For Frozen 2 alone, the online shop carries nearly 70 exclusive items, including the Disney Frozen 2 Feature Elsa Black Sea Dress and Sing & Swing Olaf. The retailer hasn't forgotten stocking stuffers or smaller budgets with products like the Lip Smacker Frozen 2 Nail Polish tin. With these exclusive products, the shops and the e-commerce site won't face much competition. If a child wants a Sing & Swing Olaf, there's only one place where Santa can get it.

The Disney shops in Target have rolled out at 25 stores nationwide, with additional locations planned for next year. But the e-commerce site will be key, considering the amount of holiday shopping done online. CNBC, citing Adobe Analytics data, reported online sales on Cyber Monday reached a record $9.4 billion, and Deloitte predicted retailers' digital sales this season may rise as much as 18% to $149 billion.

Of course, toys and children's gifts aren't the only game in town around the holidays. Target will have to show it can sell in the competitive areas of clothing and gift cards as well as other categories. And with a share price that's gained 83% this year, compared to the 27% gain for competitor Walmart, Target's ideal entry point for investors has long passed. But Target is still cheaper than Walmart on a valuation basis. It trades at 20 times earnings, while Walmart trades at 24 times earnings. Though Target has made tremendous gains this year, Target's collaboration with Disney is just one reason why there may be a lot more to come.