Is the company's new clinical drug the blockbuster many are hoping it to be?

Major single-day swings are a common occurrence in the biotech sector, as strong late-stage clinical results can send a stock surging. That's exactly what happened on Dec. 16 when Axsome Therapeutics (AXSM 1.07%), a $2.8 billion clinical-stage biotech stock, rose by 70.6% over the course of the day in response to new results for its late-stage depression drug.

While it's definitely a great piece of news, is this level of excitement justified? Should investors add Axsome to their portfolio following this news? Let's take a deeper look at the details and find out. 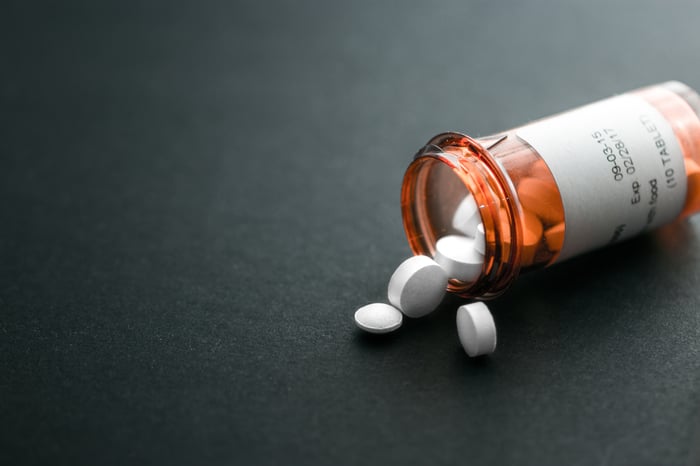 Looking at the results

Axsome reported strong results for its late-stage, experimental depression treatment, which met the primary endpoint for its phase 3 clinical trial. The drug, an NMDA receptor antagonist known as AXS-05, showed significant improvements in patients with major depressive disorder (MDD). More specifically, AXS-05 is a combination of two other well-known drugs, dextromethorphan and bupropion, which have independently been used, respectively, as a serotonin inhibitor and a nicotine antagonist. However, when put together, the two drugs showed strong results in helping patients with MDD.

In the phase 3 trial, 327 adult patients were split between the AXS-05 group and the placebo with a twice-per-day dose for a six-week period. Overall, the drug showed a significant reduction in the Montgomery-Asberg Depression Rating Scale (MADRS), a scoring system that evaluates the severity of symptoms in patients. In comparison to the placebo, which demonstrated an 11.9 average score reduction, patients on AXS-05 saw a 16.6 average point reduction in their MADRS scores.

Besides the fact that the clinical trial met all of its secondary endpoints as well, ASX-05 was well tolerated by patients, with the most common adverse reactions being nausea, headaches, and dizziness. These results confirm the already impressive results of a previous phase 2 study, where ASX-05 saw 47% of patients with MDD achieve complete remission, as opposed to the 16% of patients taking the placebo group at the time.

Depression treatments are one of the largest healthcare markets in the U.S., with around 7.1% of adults -- or 17.3 million -- Americans experiencing MDD each year. Despite the lucrative potential of this market, a number of potential depression drug candidates have fallen by the wayside following further testing. One of the most recent was Sage Therapeutics' Sage 217 drug, which ended up failing in its late-stage clinical trial, a setback that sent the stock plummeting over 60% earlier this month.

It's this historic difficulty in developing new depression treatments that make analysts and investors so excited about Axsome Therapeutics' recent success. Conventional antidepressants work by changing the chemicals in your brain that influence your emotions, otherwise referred to as neurotransmitters. The most commonly prescribed type of antidepressant is selective serotonin reuptake inhibitors (SSRIs), which stop the reabsorption of serotonin in the brain.

However, these drugs often take several weeks before they kick in, and in many cases, patients need to try out a few different antidepressants before one works as intended. SSRIs also have their own unpleasant side effects, such as sexual dysfunction, which is prevalent in as many as 70% of patients taking these antidepressants. Both of these are reasons the demand for novel depression treatments remains so strong.

Is there any competition?

For the most part, there aren't many drug candidates that can compete with AXS-05. The past year has seen many promising drug candidates either flop in their late-stage clinical trials or get rejected by the U.S. Food and Drug Administration. Besides the aforementioned Sage-217, Allergan's Rapastinel failed to show results in its clinical trials, while another depression drug developed by Alkermes also failed after the FDA ruled that it wanted more clinical data before reconsidering the treatment in the future.

Sage Therapeutics has a postpartum depression drug called Zulresso, which received FDA approval back in April, but it caters to a niche market whereas AXS-05 has a wider-reaching patient base.

One of the few drugs that can compete with AXS-05 is Spravato, a nasal-spray drug candidate being developed by Johnson & Johnson. The drug received approval in March for use in patients with treatment-resistant depression. Since then, Johnson & Johnson submitted a New Drug Application for Spravato to be used in patients with MDD who have suicidal ideation, which could compete partially with AXS-05.

However, given the sheer size of the MDD market, AXS-05 only needs to capture a small portion of the patient population to become a blockbuster, something that seems quite likely should it receive FDA approval.

All that's left for Axsome Therapeutics now is to receive official approval from the FDA, and while nothing's ever certain when it comes to health regulators, there haven't been any major points of contention so far in AXS-05's clinical results.

Axsome's stock surged by almost 3,000% since the beginning of 2019, pushing the stock from a $93 million market cap into the $2.8 billion range. Despite these impressive gains, the stock still has further upside potential in the months and years to come due to AXS-05's success. If you're comfortable buying shares of a late-stage biotech, Axsome has all the markings of a promising growth stock.