A mixed quarter showed growth with a few blips. Here’s what you need to know.

Costco has seen a great year, with increased revenue every quarter, and its stock price is up almost 50% year to date. However, the first quarter of fiscal 2020 wasn't a hit, and Costco's share price fell after its earnings release. These are five important takeaways from that first-quarter earnings report.

With so much focus on Amazon and its steady adversary Walmart, let's not forget that Costco (COST 1.24%) is a formidable player in consumer goods. Quarterly revenue of $37 billion and growing is almost a third of Walmart's, and that's significant on the national level. Over 90% of memberships in the U.S. and Canada renewed this quarter, a number that the company has been able to keep consistent, and Costco added approximately 800,000 new member households during the quarter. People like to shop at Costco. 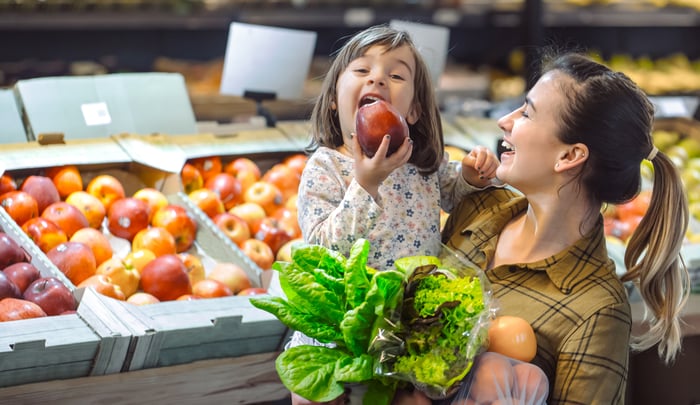 The company is pursuing further growth both across the U.S. and internationally, opening four new U.S. stores in the first quarter and having another 20 scheduled to open their doors toward the end of the fiscal year.

Groceries are one of the largest expenses for American families, and the big guys are all trying to grab a larger chunk of this market. That's why so many retailers have also become grocers, and Amazon has been undertaking a host of efforts to land a greater share.

Groceries are Costco's bread and butter, so it makes sense that the company would invest in its digital capabilities along with the rest of the major U.S. retailers, including Walmart and Target. Costco CFO Richard Galanti said, "Total online grocery continues to grow at a faster rate than the core e-commerce comps, although again it's a still relatively small piece of the business."

The website crashed for a few hours on Thanksgiving due to high usage, resulting in lost sales. Sales for the five-day period of Thanksgiving through Cyber Monday were still higher year over year, but with better preparations, the company could have seen an even greater increase.

Does Costco need to invest in a more capable infrastructure? Would the extra sales have pushed the company to hit revenue targets? These are questions management needs to keep in mind for the future.

Costco's share price fell after its earnings release. It had increased year-to-date almost 50% as of November, but started to decrease as it got closer to earnings day.

With the stock seemingly overvalued with a price-to-earnings ratio of 34, it would take a more exciting report to keep investors pushing the share price higher. Costco is a great company that delivers strong results, but investors might want to wait until the share price of this food stock falls a bit more before considering it a good value, or until the company can report an overall stellar earnings report.