It wasn't long ago that we were speculating that the Polaris Slingshot, a three-wheeled "open-air roadster" sold by powersports company Polaris Industries (NYSE:PII), is having a hard time making a business case for itself. It hasn't been having a great year sales-wise and it's acting as a drag on the bottom line of the company's motorcycle division, in contrast to Indian Motorcycle. However, some recently surfaced patent drawings tell us that it's not time to write off the Slingshot quite yet. There's some pretty strong evidence to suggest that an all-new second-generation Slingshot is on its way, and thanks to some big changes, it could attract a whole new kind of rider.

As it stands right now, the Polaris Slingshot has a barrier of entry to potential buyers that needs to be addressed: an exclusive manual transmission. If you don't know how to drive a stick shift, you just can't drive a Slingshot until you learn how to row your own gears. With manual transmission drivers in a stark minority (less than 2% of new cars sold today have a manual transmission according to Edmunds.com), it means there probably aren't a lot of drivers of traditional convertibles like the Ford Mustang or Chevy Camaro who are interested in the Slingshot.

There was a slide in the Polaris Q3 2019 earnings report back in October with a teaser image for a new Slingshot that was labeled "New Slingshot (Automatic)" -- the strongest confirmation we've seen from Polaris so far of an automatic transmission-equipped Slingshot in the works: 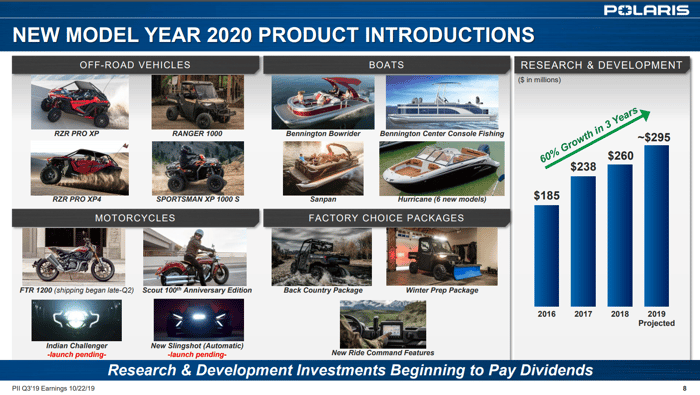 However, the company hasn't yet made an official announcement about such a vehicle as of this writing. Fueling that nugget of information is, as reported by Motorcyle.com, a trademark application from Polaris for the name "Autodrive" to be used for "transmissions for three-wheeled motor vehicles for on road use."  The only vehicle in the diverse Polaris stable that fits that description is the Slingshot.

Every first-generation Slingshot is powered by a General Motors EcoTec inline-four engine. According to patent drawings uncovered by Motorcycle.com, it looks like the next-gen Slingshot will have an in-house engine design rather than using an outsourced car engine. We really don't know much about the new engine as of this writing other than what it will probably look like and that it's an inline-four. However, it's a strong indication that the next Slingshot will be a bit more mechanically modern (and probably higher-performance) than the current model, which is using an engine first introduced in GM cars back in 2006.

What does it mean for Polaris?

The Slingshot is an extremely niche vehicle. There just isn't that big of a market for three-wheeled, open-air vehicles that cost as much as a small car (the 2019 Slingshot starts at $20,999 and goes into the low-$30k range). The addition of an automatic transmission option could give the Slingshot the boost it needs to be more competitive with more traditional convertibles like the BMW 2 Series and the Mazda MX-5 Miata. Meanwhile, the new engine could make it more attractive to enthusiasts who may have been turned off by its use of a somewhat outdated GM engine. When the high-performance Chevrolet Corvette Z06 finally came out with an automatic option in 2015, the automatic saw a take rate of a little over 70%, and it wouldn't be surprising to see a similar automatic take rate for the Slingshot.

The Polaris Motorcycles division (Slingshot and Indian Motorcycle) is a very small piece of Polaris' bottom line: Only 2.7% of the company's total gross profits, according to its Q3 earnings statement. If the new Slingshot does become a little more mainstream thanks to greater accessibility via an automatic transmission option, it could grow the motorcycle division to be a bigger part of Polaris' business. It might even attract new buyers to Polaris' bread-and-butter of off-road vehicles like ATVs and snowmobiles. People who buy Slingshots presumably have the disposable income to spend on toys, and Polaris has many different kinds of toys in its product portfolio. On the flip side, if the new Slingshot is a flop, we might never see a third generation of this wild three-wheeler. Right now, Polaris can afford to create this new product because its core business of recreational off-road vehicles has been doing well. If the core business takes a downturn, the niche Slingshot may be one of the first products to be cut.