Please ensure Javascript is enabled for purposes of website accessibility
Log In Help Join The Motley Fool
Free Article Join Over 1 Million Premium Members And Get More In-Depth Stock Guidance and Research
By Keith Speights - Jan 28, 2020 at 11:43AM

The hospital operator delivered double-digit percentage revenue growth in Q4 and looks for continued momentum in 2020.

HCA Healthcare (HCA 2.76%) has been on a roll. The hospital stock has nearly doubled over the last three years. And while HCA's shares haven't moved much so far in 2020, all the stock needed was the right catalyst.

Investors received such a catalyst with HCA's fourth-quarter update. The company announced its Q4 results before the market opened on Tuesday. Here are the highlights from HCA's latest quarter. 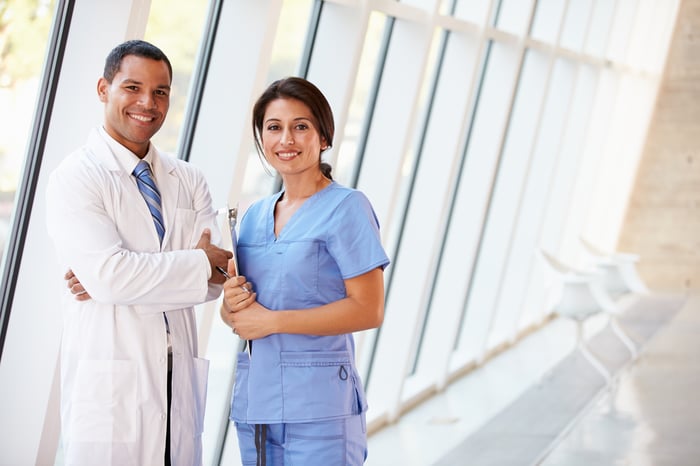 HCA announced Q4 revenue of $13.5 billion, a 10% increase from the $12.3 billion reported in the same quarter of the previous year. This result was also slightly higher than the analysts' average revenue estimate of $13.37 billion.

The hospital operator reported adjusted earnings before interest, taxes, depreciation, and amortization (EBITDA) of $2.74 billion. This was up 9% from HCA's adjusted EBITDA of $2.5 billion in the fourth quarter of 2018.

HCA posted net income in the fourth quarter of $1.07 billion, or $3.09 per share, based on generally accepted accounting principles (GAAP). This reflected improvement from HCA's net income of $1.06 billion, or $3.01 per share, recorded in the prior-year period. It also met the consensus Wall Street earnings estimate.

The company ended the fourth quarter with cash, cash equivalents, and short-term investments of $621 million. This was an increase from HCA's cash position of $559 million as of Dec. 31, 2019.

Probably the biggest question mark for HCA -- and for healthcare stocks in general -- is what will happen with the upcoming U.S. elections. Several leading presidential candidates favor major changes to the U.S. healthcare system that would dramatically affect HCA. There could be significant volatility in store as the presidential race continues over the next 10 months.