The health insurer posted solid Q4 results. But there was one yellow flag that overshadowed the good news.

Anthem (ANTM 2.71%) lagged behind the S&P 500 last year, but investors probably didn't complain too much about a 15% return. However, the big health insurer hasn't gotten off to a great start so far in 2020.

The company announced its fiscal 2019 fourth-quarter and full-year results before the market opened on Wednesday, and those results could cause concerns about Anthem to grow. Here are the highlights from Anthem's Q4 update. 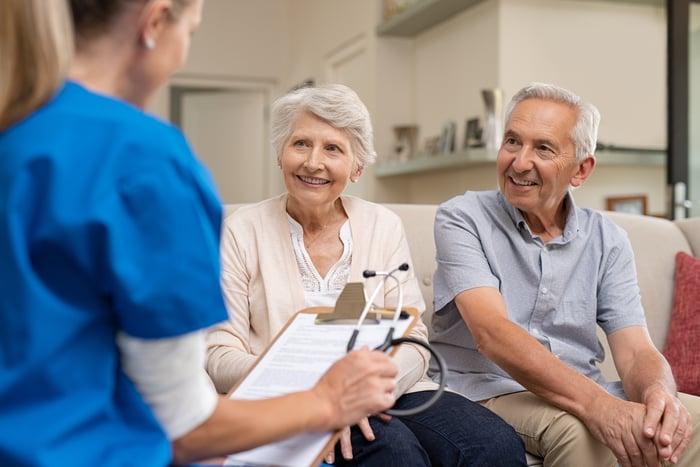 Anthem announced Q4 revenue of $27.4 billion, a 17% increase from the $23.4 billion reported in the same quarter of the previous year. This result was also higher than the average analysts' revenue estimate of $27.1 billion.

The company reported net income in the fourth quarter of $934 million, or $3.62 per share, based on generally accepted accounting principles (GAAP). This reflected strong growth from net income of $424 million, or $1.61 per share, recorded in the prior-year period.

Anthem reported that its membership totaled 41 million as of Dec. 31, 2019, up 2.7% year over year. During the fourth quarter, the company's membership increased by 16,000 covered lives from the previous quarter. This membership growth, combined with rate increases, fueled Anthem's year-over-year operating revenue growth of 16.4%.

The company's benefit-expense ratio, which compares the expenses for underwriting insurance with the premiums received from the policies, increased to 89% in Q4 from 86.8% in the prior-year period. Anthem attributed this increase primarily to the one-year waiver of the health insurance tax in 2019.

Anthem's government business segment continued to be the brightest spot for the company in the fourth quarter. Operating revenue jumped 12.6% year over year to $16.2 billion. The company's commercial and specialty business also grew, but at a much slower rate, with Q4 revenue rising 5.5% to $9.3 billion.

Despite Anthem beating the consensus Wall Street revenue estimate and meeting the earnings estimate, the health insurer's shares fell by 4% in early trading on Wednesday. Why? Investors didn't like Anthem's full-year 2020 guidance.

Anthem CEO Gail Boudreaux stated that the company has "strong momentum moving into 2020." However, a weaker-than-expected earnings outlook raises questions about that momentum. In addition, healthcare stocks in general could experience increased volatility this year as the U.S. presidential campaign heats up. Several leading presidential candidates have proposed sweeping changes to the U.S. healthcare system that could negatively affect Anthem's business.