Eli Lilly (LLY -3.02%) took investors on a roller coaster ride in 2019, with shares swinging by double-digit percentages in both directions. The big drugmaker ended the year on a positive note, though, and entered 2020 with solid momentum.

Now the company has added another reason for investors to be optimistic. Lilly announced its fiscal 2019 fourth-quarter and full-year results before the market opened on Thursday. Here are the highlights of the big pharma company's Q4 update. 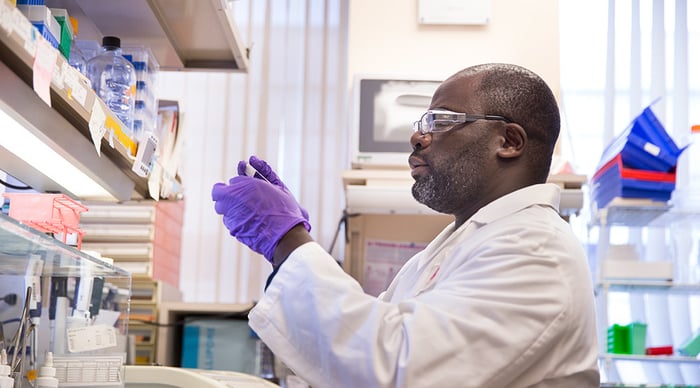 Lilly reported fourth-quarter revenue of $6.1 billion, a year-over-year increase of 8%. This result topped the average analysts' revenue estimate of $5.9 billion.

On a non-GAAP (adjusted) basis, Lilly's net income in the fourth quarter was $1.6 billion, or $1.73 per share. This was much higher than the company's adjusted net income of $1.3 billion, or $1.32 per share, posted in the same period of 2018. It also blew past the consensus Wall Street Q4 earnings estimate of $1.52 per share.

Lilly's top-selling drug, Trulicity, delivered an impressive performance in Q4 with sales jumping 31% year over year to $1.2 billion. Two other diabetes drugs also generated strong growth. Sales for Basaglar increased by 32% to $307 million, while sales for Jardiance rose 39% to $268 million.

The company's immunology franchise was also a big winner in the fourth quarter. Sales of Taltz vaulted 37% higher year over year to $420 million. Olumiant's sales soared 82% higher to nearly $83 million.

In addition, migraine drug Emgality, which won FDA approval in September 2018, racked up sales of $66.3 million in Q4, compared to only $4.9 million in the prior-year period. Sales for breast cancer drug Verzenio more than doubled year over year to $179 million.

There were a few not-so-bright spots, though. Cialis continued its decline, with sales plunging 44% year over year in Q4 to $197.8 million. Sales for osteoporosis drug Forteo fell 18% to $360 million.

Lilly's revenue growth trickled down to the bottom line. The company also benefited from the sale of its antibiotics business in China.

The company also revised its full-year GAAP earnings per share downward, to a range of $6.18 to $6.28 from the range of $6.38 to $6.48 provided in its previous guidance. However, Lilly maintained its earlier adjusted earnings guidance of $6.70 to $6.80 per share.

As with any pharmaceutical stock, the real key to Lilly's long-term success is its pipeline. CEO David Ricks pointed to the company's pipeline in his comments about the Q4 results, stating that Lilly "is in the early phase of an exciting period of growth" and is working to expand its portfolio of drugs.

One key thing to watch on this front is Lilly's pending acquisition of Dermira for around $1.1 billion. Assuming there are no obstacles to the deal's going through, the acquisition will bring several promising experimental drugs targeting chronic skin conditions.