The auto company is now worth more than $163 billion.

With shares of Tesla (TSLA 5.14%) continuing to rise sharply on Tuesday, the electric-vehicle company's market capitalization crossed $163 billion -- over four billion dollars higher than athletic apparel company Nike (NKE 2.93%). At the time of this writing on Tuesday, Tesla had a market cap of about $163.3 billion, compared to Nike's market cap of $159.2 billion.

It took some staggering growth in Tesla's market cap required to surpass Nike; Tesla's market cap was only $40 billion just six months ago. This means the automaker's stock is up more than fourfold in six months. Interestingly, Nike has actually performed very well during this same timeframe, rising 25%. But the consumer goods company hasn't grown fast enough to stay ahead of Tesla. 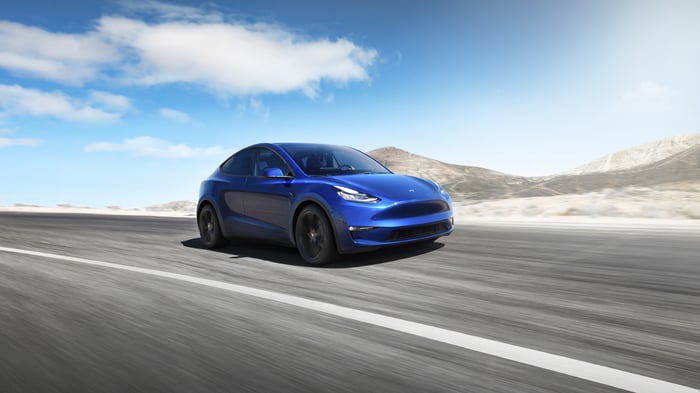 Tesla stock's wild move higher over the last six months comes as the company is seeing deliveries of its Model 3 soar. The automaker is also doing a better job of hitting management targets, increasing investors' confidence in the company's ability to execute.

Model 3 deliveries in 2019 crossed 300,000 -- up 106% year over year. This put total vehicle deliveries during the year at 368,000, within the guidance range for full-year deliveries that Tesla laid out at the beginning of the year. Looking to 2020, management expects deliveries to exceed 500,000, fueled by an earlier-than-expected launch of the company's new Model Y.

Investors are also likely pleased with Tesla's improving financials. The company was free cash flow positive in 2019 and management expects to be able to fund its growth with cash from operations going forward instead of needing to raise capital through debt or equity as it has done in the past.

Tesla stock's sharp gain on Tuesday, specifically, is likely driven by a combination of a short squeeze and a major shareholder's prediction that the automaker's total revenue can surpass $1 trillion within 10 years.