Please ensure Javascript is enabled for purposes of website accessibility
Log In Help Join The Motley Fool
Free Article Join Over 1 Million Premium Members And Get More In-Depth Stock Guidance and Research
By David Haen - Feb 7, 2020 at 9:21AM

Alzheimer's disease ranks among the most pressing medical needs facing the world. Because of the millions of aging baby boomers, the Alzheimer's Association anticipates the disease's frequency to soar from 5.8 million patients in the U.S. in 2019 to nearly 14 million by 2050. Deaths due to Alzheimer's disease jumped 145% between 2000 and 2017 making the disease the sixth leading cause of death. 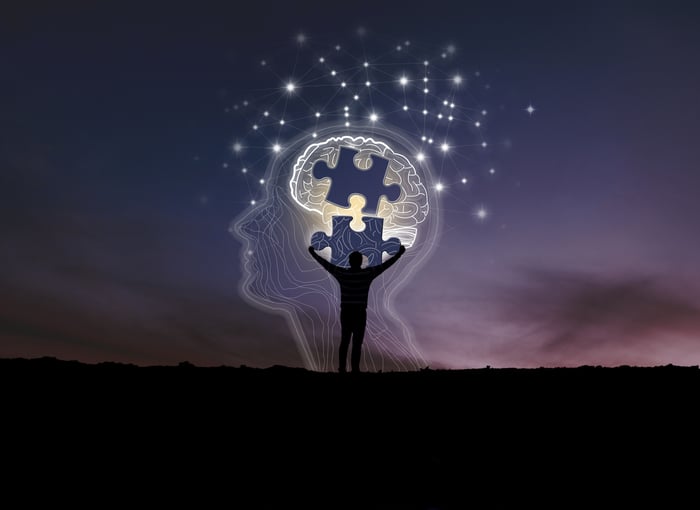 Hoping to capitalize on that ever-expanding market, Cortexyme (CRTX 0.36%) set out to develop new drugs attacking the disease at its root cause. The currently available treatments only address symptoms of the disease.

In recent years, scientific evidence forged a link between P. gingivalis infection, more commonly known as gingivitis, and Alzheimer's disease. The scientific thesis for Cortexyme's approach focuses on the discovery that the P. gingivalis bacteria can enter the bloodstream and make its way to the brain, particularly in older individuals and those with a genetic predisposition. Once inside brain cells, also called neurons, the bacteria release a toxic substance called gingipains. The gingipains digest neuronal proteins leading to the death of the brain cell.

Cortexyme and academic collaborators tested the brains from more than 100 Alzheimer's patients and found that over 90% contained P. gingivalis and gingipains. Cortexyme's drug COR388 seeks to block ginigipains in the brain, which in turn should trigger the destruction of the invading P. gingivalis bacteria and survival of the neurons. The company claims COR388 is the first oral selective inhibitor of gingipains.

How long until we see data?

Cortexyme completed a series of preclinical studies to validate the hypothesis and provide evidence that COR388 may work in humans. Two phase 1 clinical trials enrolled 67 subjects to test the preliminary safety. In its prospectus to go public last year, the company deemed COR388 to be "well-tolerated with no concerning safety signals." A phase 2/3 clinical trial in patients with mild to moderate Alzheimer's disease commenced in April 2019 and is enrolling patients. Cortexyme expects top-line results by the end of 2021.

The phase 2/3 trial needs to slow the disease progression, which requires time and explains why it's expected to take another two years. The primary endpoint will be the average change in the Alzheimer's disease Assessment Scale-Cognitive Subscale 11 (ADAS-Cog11) between baseline and after 48 weeks of treatment. Simply recruiting the 570 patients for the trial, treating them for 48 weeks, and allowing for a follow-up period will take some time.

Investing in biotech can be risky in the best of times. The Alzheimer's indication, historically, has seen plenty of drugs that looked promising and then never succeeded. The traditional approach of targeting the buildup of plaques in the brain has yet to deliver an approved drug.

However, Biogen (BIIB 0.92%) shocked the biotech world with its bombshell announcement last October that it's seeking Food and Drug Administration approval for an Alzheimer's therapy that initially failed its pivotal trial. The company believes a subsequent analysis demonstrated enough benefit to warrant the FDA's consideration. Biogen's valuation surged by billions on that announcement.

Cortexyme possesses several positive attributes. First, it's pursuing a new avenue to treat Alzheimer's disease. While no precedent exists, new understanding of the biology of the disease makes the approach reasonable. Second, the patient need and potential market for a disease-modifying drug is tremendous. Any successful drug could become one of the best-selling drugs of all time.

Case in point: European specialty pharma Lundbeck paid $100 million to secure the rights to an Alzheimer's disease drug from Myriad Genetics in 2008. And 40 days later, the drug failed in a phase 3 trial. If it waited for the trial to turn out positive, Lundbeck wouldn't have been able to afford to compete for rights to the drug. It made a calculated gamble that did not pan out. Whether the drug works or not, Cortexyme investors still can earn a financial windfall in this type of scenario.

On the negative side, Cortexyme's news flow could be anemic. Companies rarely comment on ongoing trials. The key news will be updates on and completion of enrollment in the trial. From that point, investors can calculate the 48-week treatment period and then estimate when the news may hit. The only other potential news will be on expanding COR388 into additional clinical trials or any new data from its early-stage library of drugs.

Only risk-tolerant investors should consider a stock like Cortexyme. Personally, I want to see how the enrollment goes. With data not expected until late 2021, ample time exists to build a position in the stock.