Please ensure Javascript is enabled for purposes of website accessibility
Log In Help Join The Motley Fool
Free Article Join Over 1 Million Premium Members And Get More In-Depth Stock Guidance and Research
By Donna Fuscaldo - Feb 9, 2020 at 10:15AM

Amazon's advertising business may not be a threat just yet, but it's becoming an important driver of revenue growth for the e-commerce giant.

Online advertising has been dominated by Facebook (META -2.57%) and Alphabet's (GOOG -1.79%) (GOOGL -1.77%) Google for several years now, but there are hints that Amazon (AMZN -1.85%) is beginning to get in on the revenue bounty. That should have the current duopoly worried, even if it might be a while still before Amazon's efforts become a real threat. Let's take a closer look at the situation and where it might be leading.

Amazon grabs a piece of the online advertising pie

For years, advertisers have been throwing billions of advertising dollars at Facebook and Google to market products and services on their various online platforms. In Facebook's fourth quarter alone, revenue from advertising on its various apps totaled $20.7 billion. Meanwhile, ad sales on Google's various apps and services totaled $37.9 billion for its fourth quarter. 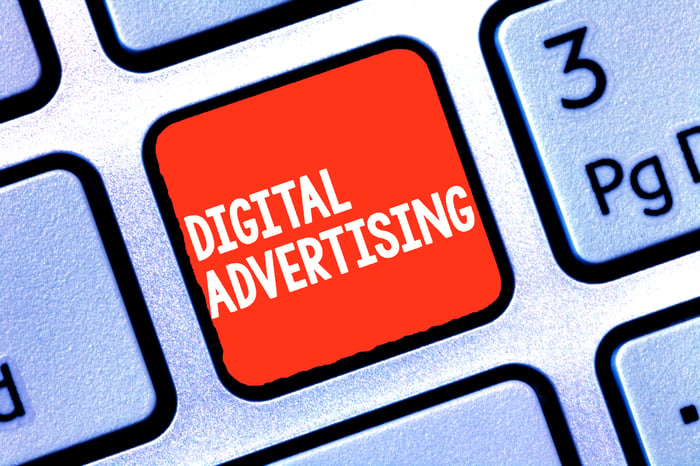 Then there's Amazon. For its fourth quarter, it posted a record $4.8 billion in revenue for its "other" segment (advertising revenue makes up the bulk of this segment's revenue). While its ad sales are just a fraction of what Facebook and Google generate, Amazon's ad business is growing at a faster rate. Ad sales increased by 41% in the fourth quarter compared with 25% and 20% for Facebook and Google, respectively. Revenue from advertising even outgrew Amazon's overall business, which reported 21% growth in the fourth quarter.

By 2023, Juniper Research predicts Amazon will have yearly advertising revenue of $40 billion (up from almost $10 billion in 2019) and have a 7.7% market share. That suggests a 400% growth rate over the next four years. The overall digital advertising market size by 2023 is projected to be $520 billion, according to Juniper. In comparison, Google is projected to have $230 billion in advertising revenue by 2023 (a 44.2% market share). Juniper predicts Amazon will use its retail data and investment in artificial intelligence and machine learning to provide advertisers with an efficient platform to target customers. The company thinks these efforts will lure advertisers away from Facebook and Google.

Amazon has said it is focusing on growing its advertising business, noting on its fourth-quarter earnings conference call that it is working to lure more brands to its marketplace by developing tools and products that give those companies more reasons to run ads. Dave Fildes, an investor relations executive at Amazon, pointed to the Stores initiative, which enables brands to customize and curate a multipage store, and the Posts initiative, which includes curated feeds that feature the brands' content. "I think broadly with advertising, so much of this is about ... developing great relationships with these sorts of advertisers," Fildes said during the fourth-quarter conference call.

Investors hanging their hats on Amazon's stock soaring on ad sales will have to be patient. Facebook and Google won't give up their dominating in that area anytime soon. But as investors and analysts pay more attention to that portion of the business and the potential it offers, it could provide a new reason for excitement about the stock (and spark share-price growth). Amazon does seem to be taking a long view, building relationships with the brands instead of selling them ad space. Posts and Stores aren't specifically designed to boost advertising, but they could have that effect. Brands could also increase ad spending to drive Amazon's customers to their Stores and to get noticed on Posts. All of that will take time to play out.

A possibly huge driver of future ad sales is Amazon's initiatives to sell ads on streaming TV platforms outside of Fire TV. As it stands, Amazon uses its data to target the ads placed on Fire TV as well as its IMDb TV platform, and now it wants to offer that targeted ad data to others. Amazon is reportedly talking to streaming TV app owners and various cable networks about letting it sell ad inventory on their systems. Advertisers would get access to its targeting tools on these platforms only by purchasing ads through Amazon.

Amazon already does that for various online publishers, so offering it to TV app owners is a logical next step, and a beneficial one, too. Everyone has difficulty filling ad space and would welcome another source. For Amazon, it means another way to boost its advertising revenue.

While Amazon ad sales don't get the attention that other more forward-facing parts of the company do, this segment has the potential for profitability and offers another way for this tech giant to diversify and continue to drive double-digit revenue growth.