Please ensure Javascript is enabled for purposes of website accessibility
Log In Help Join The Motley Fool
Free Article Join Over 1 Million Premium Members And Get More In-Depth Stock Guidance and Research
By Keith Speights - Feb 12, 2020 at 7:00AM

The diagnostics company easily topped Q4 revenue and earnings expectations. But the bottom-line beat came with an asterisk.

Exact Sciences (EXAS 7.96%) excited investors last year with a huge gain of 47%. But after getting off to a good start in 2020, the diagnostics stock gave up its initial gains.

The company announced its fourth-quarter results after the market closed on Tuesday. And there was plenty of good news for investors. Here are the highlights from Exact Sciences' Q4 update. 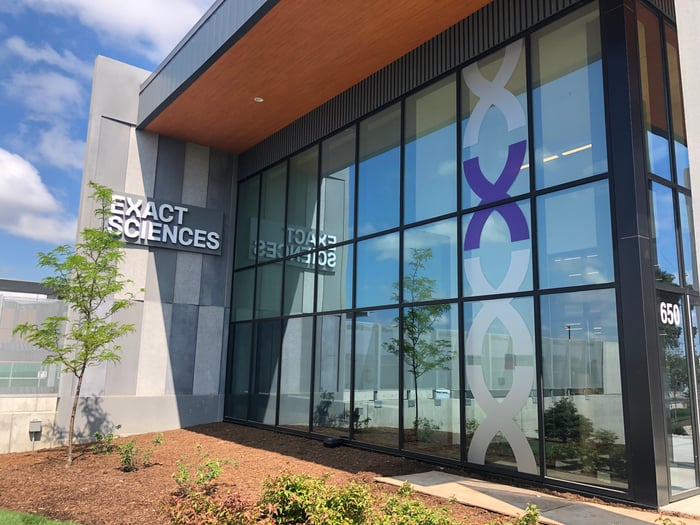 Exact Sciences announced Q4 revenue of $296 million, a 60% increase from the $143 million reported in the same quarter of the previous year. This result handily beat the average analysts' revenue estimate of $283 million.

The company reported net income in the fourth quarter of $77.9 million, or $0.54 per share, based on generally accepted accounting principles (GAAP). This reflected a significant improvement from Exact Sciences' net loss of $54 million, or $0.44 per share, in the prior-year period. It was also much higher than the consensus Wall Steet estimate of a net loss of $0.35 per share in Q4.

Exact Sciences posted earnings before interest, taxes, depreciation, and amortization (EBITDA) in the fourth quarter of negative $70 million. The company's adjusted EBITDA came in at $9.7 million.

In the past, all of Exact Sciences' revenue growth came from its Cologuard DNA screening test for colorectal cancer. That's no longer the case now, though, thanks to the company's acquisition of Genomic Health.

Still, though, Cologuard remains a big growth driver for Exact Sciences. The company reported screening revenue of $296 million, up 60% year over year. Most of this revenue stems from Cologuard, although some also comes from the company's Biomatrica products. Exact Sciences stated that the test volume for Cologuard jumped 63% to 477,000.

But Genomic Health is also now an important moneymaker for Exact Sciences. Precision oncology revenue, which consists of the Genomic Health business, totaled $66 million between Nov. 8, 2019, and Dec. 31, 2019. On a pro forma basis including the period in the fourth quarter prior to the close of the acquisition, the unit generated revenue of $119 million in Q4, up 14% year over year. Oncotype DX test volume also increased by 14% to 41,000 in Q4.

There was a little smoke and mirrors with Exact Sciences' unexpected GAAP profit, though. The company recorded an income tax benefit of $184.6 million. Without the impact of this tax benefit, Exact Sciences would have had a net loss in Q4.

CEO Kevin Conroy said, "The strong foundation we've built for Cologuard and Oncotype DX and the capabilities of our combined team position us well to continue to grow our core business and deliver more innovative cancer tests to people in need."

Growth stocks are often priced to perfection. Exact Sciences is no exception. Any bumps in the road in 2020 could cause the stock to fall. However, the long-term prospects for the company appear to remain very good.