Please ensure Javascript is enabled for purposes of website accessibility
Log In Help Join The Motley Fool
Free Article Join Over 1 Million Premium Members And Get More In-Depth Stock Guidance and Research
By Keith Speights - Feb 19, 2020 at 7:05AM

A revenue miss and a narrow earnings beat weren't what investors hoped for in Q4.

Amedisys (AMED -1.93%) ranked as one of several home-care stocks that performed really well in 2019. Its shares soared nearly 43% last year. And the stock was off to a great start in 2020 coming into this week.

But that momentum hit a pothole as Amedisys reported its 2019 fourth-quarter and full-year results after the market closed on Tuesday. Here are the highlights from the company's Q4 update. 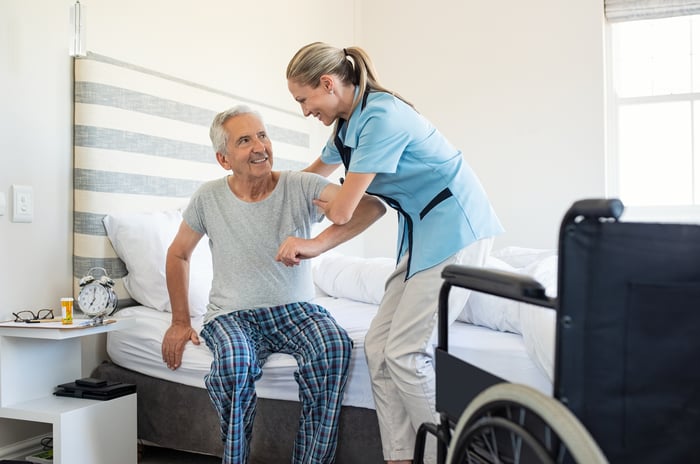 Amedisys announced Q4 revenue of $500.7 million, a 15% year-over-year increase. However, this result came in below the average analysts' revenue estimate of $511.55 million and appears to have burst the bubble for investors expecting a stronger performance.

The company's biggest moneymaker is its home health segment. Net service revenue for this segment totaled $316.2 million in Q4, up 4% year over year. Most of this growth came from payers other than Medicare.

Amedisys' fastest-growing unit was its hospice business. This segment generated net service revenue of $164.6 million, a 51% year-over-year jump. The company's acquisition of Compassionate Care Hospice, which closed in February 2019, fueled most of this growth.

The personal care segment was nearly an asterisk in the fourth quarter. Amedisys reported net service revenue for the segment of $19.9 million, down from $21.6 million in the prior-year period.

While the company's GAAP earnings were basically flat compared to the same period in the previous year, Amedisys' non-GAAP adjusted earnings improved considerably. This improvement stemmed primarily from adjustments for acquisition and integration costs and asset impairment.

The company's recent acquisition of Asana Hospice should boost its hospice segment's revenue this year. Asana operates in five states, providing hospice care to around 540 patients on a daily basis.

Healthcare stocks, including Amedisys, could be especially volatile in 2020, though, as the U.S. presidential campaign heats up. Leading Democratic presidential candidate Sen. Bernie Sanders supports major changes to the U.S. healthcare system that could significantly affect Amedisys' business.

Why Amedisys Stock Is Crashing Today