The coronavirus is driving extreme market volatility, helping the iPhone maker bounce back from yesterday's sell-off.

Shares of Apple (AAPL 4.01%) have jumped today, up by 4% as of 12:15 p.m. EDT, amid ongoing market volatility driven by the novel coronavirus. Here's all the recent outbreak-related news.

iPhone sales in China plunged by over 60% to approximately 500,000 in February, according to Reuters, which cited government data. That's worse than the 40% decline that third-party market researchers had forecast, but isn't entirely unexpected, as the company had warned last month that it would miss its revenue outlook, in part because "demand for our products within China has been affected" by the crisis. As China makes progress in combating the COVID-19 respiratory illness, Apple has reopened all but four of its retail stores in the country. 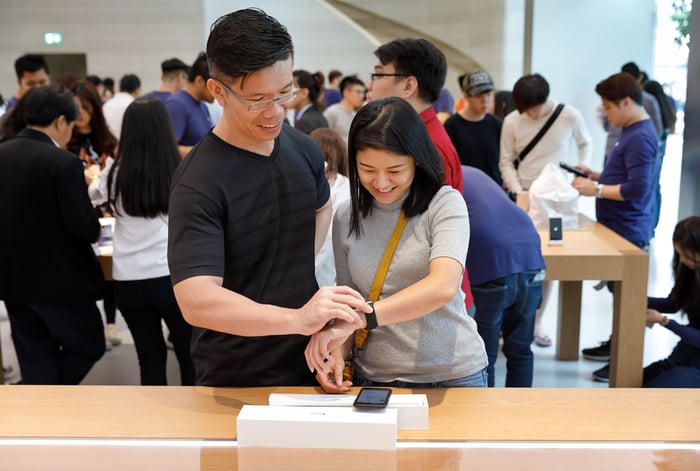 The tech giant has also extended unlimited sick leave to retail employees that may be exhibiting symptoms of possible infection, according to 9to5Mac. A worker at Apple's corporate campus in Ireland has tested positive for coronavirus.

Santa Clara County this morning also issued a ban on mass gatherings that takes effect tomorrow and will remain in place for at least three weeks. Santa Clara County includes much of Silicon Valley, and the Bay Area has been among the hardest-hit regions within the U.S. thus far. It seems increasingly likely that the Mac maker will be forced to cancel its Worldwide Developers Conference (WWDC), which typically takes place in June. WWDC isn't especially important to Apple financially, but the company uses the event to showcase the next major versions of its operating systems and sometimes unveils new hardware products.

By giving investors an early warning about the coronavirus impacts, Apple gave the market ample time to price in the short-term downside to its business. The stock remains reasonably priced at 21.8 times earnings, so long-term investors may be taking advantage of the pullback to buy more shares.