Please ensure Javascript is enabled for purposes of website accessibility
Log In Help Join The Motley Fool
Free Article Join Over 1 Million Premium Members And Get More In-Depth Stock Guidance and Research
By Dan Caplinger - Mar 24, 2020 at 11:32AM

As rates on some investments head toward zero, parts of the market are moving the other direction. Should you cash in?

The coronavirus pandemic has had a dramatic impact on everyone's daily lives, and the financial ramifications are enormous. Initially seen as simply a temporary disruption, the COVID-19 outbreak has led to widespread closures of businesses and schools along with government orders to stay inside whenever possible. That's putting immense pressure on the global economy and the financial system, and what used to be smooth-functioning markets are exhibiting signs of the stress.

Amid fears about the crisis, the Federal Reserve has done what it can with supportive monetary policy, reducing its short-term rates to near zero. Rates on high-quality short-term debt have also fallen precipitously, along with bank CDs and savings accounts. Yet one typically quiet part of the market has seen rates soar -- and it could be a big opportunity for those looking for income. 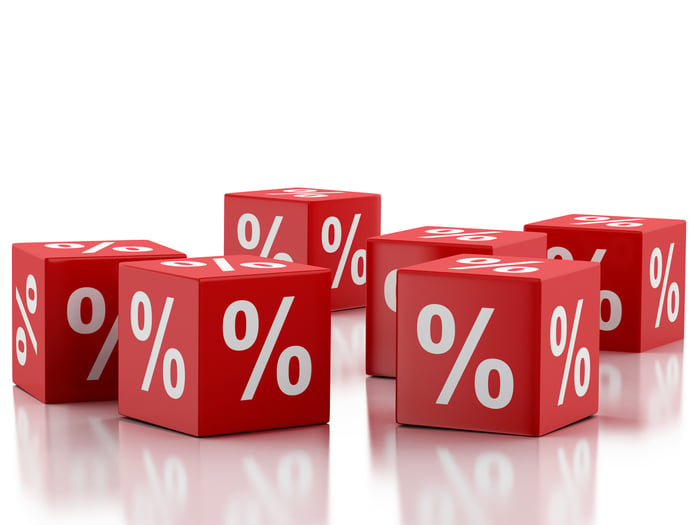 A big move in municipal bonds

The municipal bond market doesn't get a lot of attention from investors. These bonds, which state and local government entities issue in order to raise money for public projects and other spending needs, don't see as much trading as the more popular Treasury bond market. However, the big benefit that municipal bonds have for investors is that their interest is free of federal income tax -- and for those who live in the state in which the bonds get issued, free of state and local income tax as well.

That's shown up in prices of municipal bond ETFs. The iShares National Muni Bond ETF (MUB 0.39%) has seen its share price fall as much as 15% from its levels just last month, and even after a partial recovery, the ETF is still down 10% or so.

For the most part, municipal bonds have been relatively safe historically. They're not risk-free, because even though they're backed by the state and local governments that issue them, those governments don't have the unlimited power to create money that the federal government has. As a result, muni bonds have occasionally defaulted in the past.

Investors in municipal bonds clearly fear that conditions are ripe for a wave of defaults. With local businesses closed and many property owners losing their primary sources of income, many key funding sources for state and local governments could dry up at least temporarily. There'll be pressure on those governments to provide relief to residents who are hurting -- even if it comes at the expense of bondholders.

That said, the high interest rates that municipal bonds currently sport imply significantly greater risk than we've seen even at past times of market strain. Spreads between Treasury and municipal bond rates widened during the financial crisis in 2008, for example, but they subsequently narrowed.

Moreover, the Federal Reserve has specifically said that it will provide a backstop to municipal bonds as part of its broader package to shore up financial markets. That opens the door to asset purchases as needed to keep the muni bond market functioning.

Take a look at higher yields

Most investors pay the closest attention to the stock market, because stocks offer the growth potential to create lasting wealth. For those who need income, however, bonds make a good component of a successful asset allocation strategy. Finding the bonds that have the greatest return potential is important -- and right now, municipal bonds look like a compelling value if you trust the financial system to work the way policymakers want it to operate.