Please ensure Javascript is enabled for purposes of website accessibility
Log In Help Join The Motley Fool
Free Article Join Over 1 Million Premium Members And Get More In-Depth Stock Guidance and Research
By Rhian Hunt – Apr 1, 2020 at 11:49AM

The company says production could start by June with the right support.

In one of the stranger plot twists to emerge from the coronavirus pandemic, British American Tobacco (BTI -1.33%) issued a news release today stating it is helping to develop a COVID-19 vaccine through a process using tobacco plants. Kentucky BioProcessing, a subsidiary of British American, is performing the actual research and development on the project.

This isn't Kentucky BioProcessing's first foray into medicine. The company produced Ebola treatment ZMapp in tobacco plants in 2014. While the effectiveness of ZMapp eventually proved lower than several other treatments, it still apparently increased survival rates. ZMapp was originally developed by Mapp Biopharmaceutical, but Kentucky BioProcessing was able to ramp up its production by rapidly producing the chimeric antibody treatment in tobacco plants. 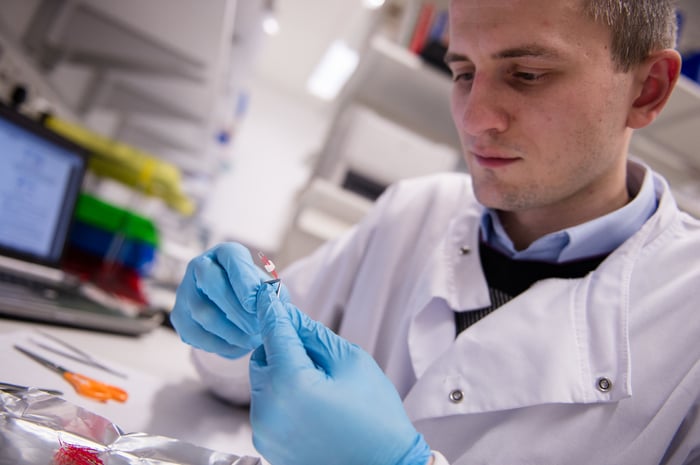 Now, British American asserts, its subsidiary has developed an antigen that triggers an immune response in the human body, which responds with antibodies. The antigen comes from cloned COVID-19 genes and should theoretically vaccinate against the coronavirus. The company says it successfully grew the antigen inside tobacco plants and is now using a purified extract in pre-clinical tests.

British American Tobacco hopes governments will assist with the process and posits that production of the vaccine could start in June of this year. It also claims that once fully operational, its tobacco-based production could crank out 1 million to 3 million vaccine doses weekly. The company says it will provide these doses on a not-for-profit basis, though it will otherwise continue to operate as a for-profit enterprise.