Shares of the home improvement retailer slipped due to concerns about the expanding coronavirus pandemic.

Shares of Home Depot (HD 0.67%) pulled back last month as the home improvement retailer got swept up in the coronavirus-driven sell-off. As a retail stock, the company is vulnerable to changing shopping patterns even though Home Depot is considered an essential retailer and its stores have remained open.

According to data from S&P Global Market Intelligence, the stock fell 14% in March. As you can see from the chart below, the stock mostly fell in tandem with the S&P 500. 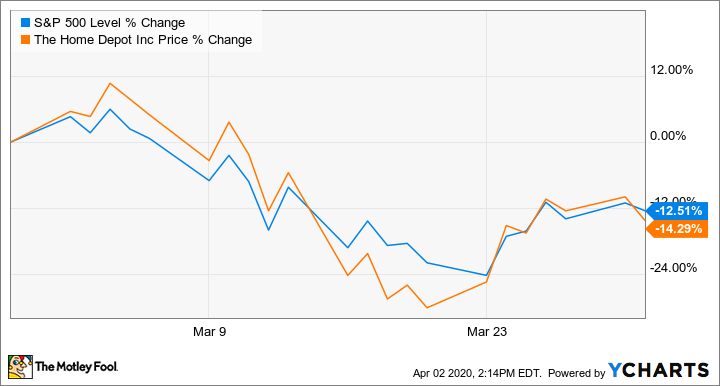 On March 18, Home Depot said it would begin closing all stores at 6 p.m. to give staff more time to clean stores and restock shelves. Calling itself an essential retailer, especially in times of crisis, the company noted that a number of its items had been in high demand, most likely things like cleaning supplies and appliances like freezers and refrigerators as many Americans have stocked up on food. Management also said it would give employees expanded paid time off. It was unclear from the announcement how Home Depot's business is being affected, though even increased demand during this time hasn't necessarily translated into improved profits, as Target implied in its business update.

Home Depot will also lose out on the popular spring home-buying season as home sales are expected to be down significantly this year as most Americans have been asked to stay at home to avoid spreading the virus.

On April 1, Home Depot said it would expand bonuses and benefits to employees, and that it was taking steps to limit the spread of the virus inside its stores by capping the number of customers inside at one time, adding signage to help customers maintain social distance, and eliminating major spring promotions in order to avoid heavy traffic to its stores.