The company's beer portfolio drives results, but it may encounter headwinds in the near future.

Wine, spirits, and beer manufacturer Constellation Brands (STZ -1.71%) maintained buoyant sales through its fourth quarter of fiscal 2020, which ended on Feb. 29 -- just as the coronavirus pandemic began to accelerate within the United States. Below, we'll review the company's results, released Friday, as well its pre-COVID-19 fiscal 2021 outlook. We'll also discuss two issues that could impact sales in the near-to-intermediate term. Bear in mind that all comparative numbers refer to those of the prior-year quarter. 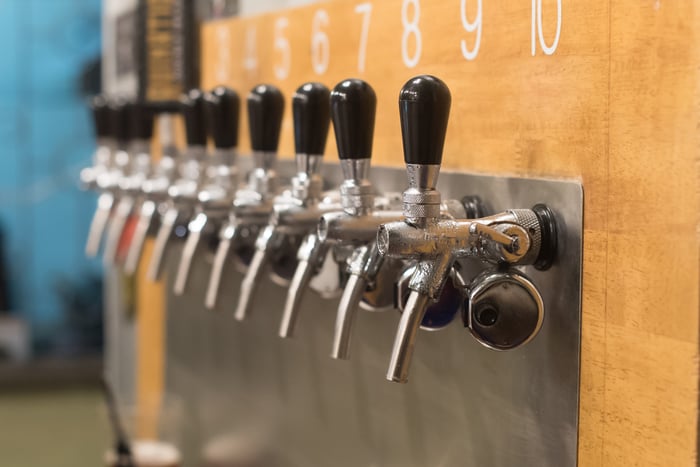 Constellation Brands opted against issuing fiscal 2021 earnings guidance on Friday due to increasingly uncertain business conditions arising from the COVID-19 pandemic. However, the company did share some "pre COVID-19 business target assumptions for 2021." These penciled-in targets included organic net beer sales growth of 8% to 10%, organic wine sales growth of 2% to 4%, and the generation of between $2.3 billion and $2.5 billion in operating cash flow during the fiscal year.

Constellation also updated shareholders on supply issues. During the company's earnings conference call, management informed investors that it was working on its options following a late-March referendum in the Mexican city of Mexicali that effectively prevents Constellation from completing a billion-dollar production plant in that city. Residents are concerned that the new plant will consume an inordinate amount of already-scarce water, while Constellation has consistently maintained that the facility won't affect the city's water supply.

To date, Constellation has invested $700 million in the Mexicali plant. Company executives have been in discussions with the Mexican government since the outcome of the referendum but provided no new information on this issue during the earnings call. The problem won't impact the manufacturer's near-term supply, as it has ample production capability at its Nava and Obregon plants in Mexico to meet current needs.

However, management discussed another Mexican production headwind that may potentially impact current supply. Last week, the Mexican government deemed beer a nonessential item as it moved to shut down entire industries to combat the spread of the coronavirus. As my colleague Rich Duprey explained, beer production in Mexico was slated to cease on Saturday. Constellation's Mexican beer portfolio, while sold in the U.S., is currently manufactured in its Mexican plants.

Management observed on Friday that the consumer staples manufacturer has approximately 70 days' worth of Mexican beer inventory placed at U.S. distributors, in addition to product currently sitting on store shelves. CEO Bill Newlands also simply stated, "We continue to operate in Mexico," although he didn't elaborate on any exemption status the company may have received from the Mexican government.

So, it appears that Constellation can weather the next two to three months of supply constraint, and at least for now, it's apparently still proceeding with production in Mexico. This is likely reassuring to shareholders. However, they await a resolution to future capacity in regard to the Mexicali plant, given the importance of Mexican beer to the company's overall results. While Constellation has sunk considerable resources into this brewing facility, it may end up looking to build elsewhere in Mexico or the U.S. to ensure the supply of its core revenue driver.