But is the dividend for this struggling retail REIT safe?

The coronavirus crisis has had an effect on pretty much the entire global economy, but it's taken direct aim at two sectors: Financials and retail. The vast majority of retailers are shut down for some yet-to-be-determined time, and the financial markets are experiencing credit crunches and general liquidity issues. Unfortunately for one retail-focused real estate investment trust (REIT), all of these things have converged at exactly the wrong time.

Tanger Factory Outlet Centers (SKT 0.66%) released a company update on March 31. In the report, the REIT explained that the majority of the company's stores are closed and have been since mid-March. Tanger management said it has withdrawn its guidance for 2020 and will still pay its May dividend, which was declared in January. The company also explained that it is doing what it can to help with the broader crisis. For instance, it is allowing its parking lots to be used as staging areas for local first responders that need space for mobile testing facilities. 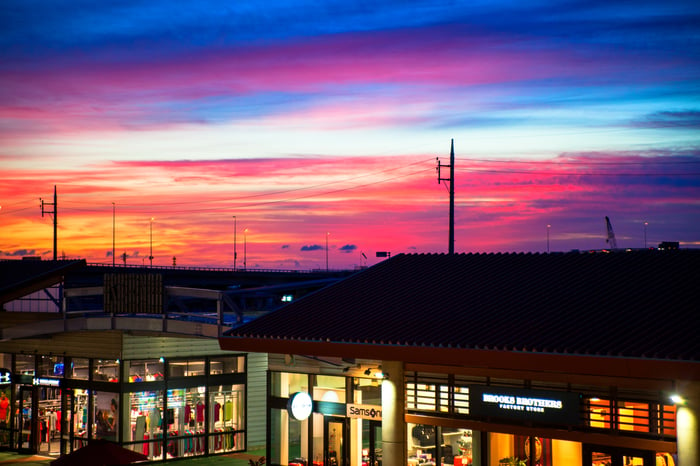 Tanger has issues but it is not a bankruptcy candidate

Tanger came into this COVID-19 pandemic already suffering from the general issues related to a slowdown in brick-and-mortar retail, and some large bankruptcies from clothing retailers like Forever 21 and Dressbarn. The stock was kicked out of the Dividend Aristocrats index (a group of S&P 500 companies that have grown their annual dividend payments to shareholders for at least 25 consecutive years), and it has been one of the most-shorted stocks on Wall Street in recent years.

Tanger began 2020 with $16.7 million in cash on the balance sheet. The company has drawn down the entirety of its $600 million revolving line of credit, and it will suspend some planned capital expenditures. Some of its operating expenses, and general and administrative expenses will be deferred as well.

Can the company survive this slowdown? A back-of-the-envelope analysis suggests that it can. Annual interest and lease payments are $66 million before the interest on the line of credit is factored in, which is probably around $12 million. Annual property operating expenses were $157.7 million, and general and administrative expenses were $53.8 million. Capital expenditures were $47.9 million, and some of that can be deferred. So we are probably looking at something like $320 million in annual costs to cover, or about $27 million a month. Against that, the company has at least $600 million in cash. Fortunately, it has only about $4 million in long-term debt maturing this year. If the crisis lasts a few months more, Tanger has the liquidity to make it through. Bottom line, Tanger is not a bankruptcy candidate.

The revenue picture will remain challenging

So we have seen what the cost side of the equation looks like. What about revenue? How many tenants are paying rent at the moment?

While it is hard to tell what the force majeure clauses in the various property leases say in relation to the current crisis, it is probably safe to assume that the tenants' lawyers will interpret those clauses to mean they don't have to pay rent. It's also likely that, while businesses are closed by government order, Tanger will receive little-to-no rental income. The bigger question comes after businesses are permitted to reopen. Even after the social distancing restrictions are eased or lifted, many potential customers will choose to stay home out of an abundance of caution. This means that whatever variable rent Tanger gets based on comparable sales (which accounted for 22% of its revenue last year) will probably not be paid (or will be greatly reduced). In addition, Tanger will have expiring leases to manage and will need tenants to fill those properties. Revenue is going to take a while to recover, even after the crisis has abated.

Can the company maintain the dividend?

It is unlikely that Tanger will have the cash flow in hand to pay $35 million in common stock dividends for the mid-June dividend. Further, it is entirely possible that the revolving credit agreement has language that prevents the company from using it to fund dividends and buybacks until the credit line is paid back first. In the company update, Tanger management said this about future dividends:

The Board of Directors plans to evaluate the payment and rate of any subsequent dividends quarterly. The Company expects to remain in compliance with REIT taxable income distribution requirements for the 2020 tax year.

This statement basically prepares the market for the possibility that the next dividend (assuming there even is one) is going to be smaller. Of course, the stock's dividend yield of 30% is already strongly suggesting that there isn't likely to be one, so it isn't much of a revelation.

That said, the company is trading at a discount-to-book value, which provides some downside protection at this point. It's very likely the company has some other shoes to drop, and the coming six months are going to be a struggle (like they will be for all retail-related REITs), but Tanger has probably seen the worst already.