Please ensure Javascript is enabled for purposes of website accessibility
Log In Help Join The Motley Fool
Free Article Join Over 1 Million Premium Members And Get More In-Depth Stock Guidance and Research
By Prosper Junior Bakiny – Apr 21, 2020 at 8:39AM

The company's shares gained about half a percentage point following its quarterly update.

There are now 5,669 da Vinci systems installed worldwide -- 11% higher than the year-ago period -- and the number of procedures performed with the da Vinci system increased by 10% year over year. Intuitive Surgical reported a net income based on generally accepted accounting principles (GAAP) of $314 million, or $2.62 on a per-share basis. The company's GAAP net income and earnings per share both increased by about 2.3% year over year. 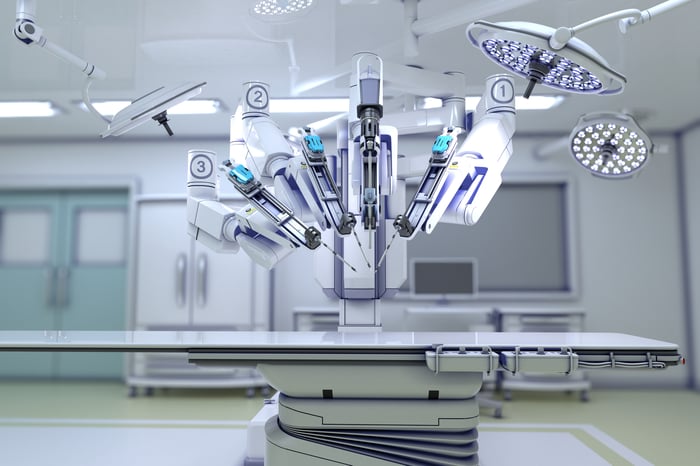 The market's response to Intuitive Surgical's first-quarter results was barely noteworthy, with the company's shares gaining a meager 0.5% in the after-hours trading session. However, investors should brace for more difficult times ahead. Intuitive Surgical's business is currently facing headwinds due to the COVID-19 pandemic. As management said, Intuitive Surgical "experienced a significant decline in procedure volume and postponements of system placements in the latter half of March in the U.S. and Western Europe, as healthcare systems in those areas diverted resources to meet the increasing demands of managing COVID-19."

Management had made similar comments when the company released its preliminary first-quarter results on April 8. Intuitive Surgical did not provide guidance due to the economic uncertainty caused by the ongoing outbreak, noting that it "cannot at this time estimate" the effects of the current healthcare crisis on its financial results. Despite these headwinds, Intuitive Surgical is a stock worth buying. The company remains the leader in the market for robotic-assisted surgery devices -- an industry that still has a lot of room to grow -- and once the current health crisis is over, Intuitive Surgical's business should pick up right where it left off. With the company's shares down by 11.3% year to date, this represents an excellent entry point for investors focused on the long term.