Please ensure Javascript is enabled for purposes of website accessibility
Log In Help Join The Motley Fool
Free Article Join Over 1 Million Premium Members And Get More In-Depth Stock Guidance and Research
By Dan Caplinger - Apr 26, 2020 at 10:17AM

One index just included the soaring tech stock, but there are bigger fish to fry in the index-fund universe.

Zoom Video Communications (ZM 4.22%) has been one of the most successful stocks of 2020. The video conferencing specialist has taken advantage of a unique set of circumstances that have lifted its business into the stratosphere, as companies that have shut down their central office locations are using Zoom's services to help workers collaborate with each other. The Zoom craze has gone beyond the enterprise community as well, with schools, government officials, and even churches and other gatherings turning to the platform in the era of social distancing and stay-at-home orders.

Many people believe that the rise in Zoom's stock is unsustainable. Yet despite arguments that many of Zoom's 300 million users won't ever be willing to pay a penny to use the service, the stock's market capitalization has now risen to nearly $50 billion. That's enough to gain entrance to one popular stock market index, and it raises big questions: Will Zoom get to join the S&P 500 Index (^GSPC 3.06%), and if so, when? 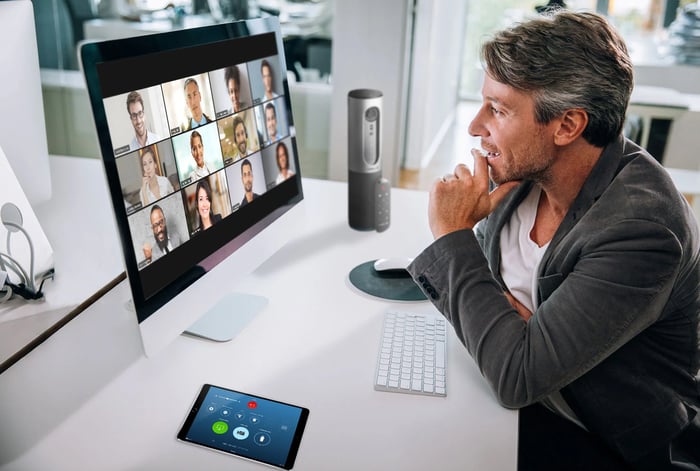 One down, one to go

Zoom found out this week that its stock will get included in the Nasdaq 100 Index. The move will take effect at the beginning of the trading day on April 30, with the video conferencing company's shares replacing outgoing component Willis Towers Watson, which is now about half Zoom's size.

Nasdaq's eligibility criteria for joining the Nasdaq 100 Index are relatively simple. To qualify, a company has to list its shares exclusively on a Nasdaq exchange. It has to be in a sector other than financials, not be in bankruptcy, and have average daily trading volume of 200,000 shares or more. It has to have traded for three months or more, and it can't have any annual financial statements for which auditors have withdrawn an audit opinion. With such lenient guidelines, it made sense that Zoom would be able to join the Nasdaq 100 quickly.

Getting into the S&P 500 is a little more complicated. On one hand, it'd seem to be easier to gain entry to the S&P 500 simply because it has 500 stocks rather than just 100. Although it's a large-cap index, dozens of its components have market capitalizations that are far smaller than Zoom's current value.

Zoom already meets many of the S&P 500's basic inclusion criteria. They include the stock getting listed on a major U.S. stock exchange and having a share price above $1, as well as being domiciled in the U.S. and being set up as a corporation rather than a limited partnership or other business structure. Market cap is far above the $8.2 billion lower limit. Trading volume meets a formula that guarantees adequate trading liquidity for institutional index investors.

Moreover, there are a couple of criteria that Zoom is either on the verge of reaching or has just reached. Companies generally need to have traded for at least 12 months after an initial public offering. With Zoom having gone public on April 18, 2019, it just reached the 12-month threshold. In addition, companies need to have posted positive net income under generally accepted accounting principles both over the past 12 months and in the most recent quarter. Zoom earned $21.8 million in its most recent fiscal year ending Jan. 31, 2020, and was actually profitable in all four of its most recent quarters taken separately.

Under former S&P 500 admission rules, it used to be that companies had to have at least 50% of their outstanding shares available for public trading. Zoom would have trouble meeting the 50% float requirement currently, as information from S&P Global Market Intelligence says that just 42% of its outstanding shares are part of its float. However, that rule no longer applies to stocks as of mid-2019.

Zooming into the index

All in all, Zoom could get an invitation to the S&P 500 in the near future. That could be huge for the stock, as individual and institutional investors put huge amounts of money -- trillions of dollars -- into S&P 500-tracking index funds. When Zoom gets its invite, those investors will have no choice but to get exposure to the video conferencing technology company. Nearly all of them will buy shares -- no matter what the cost.

So if you're an index investor, the odds are good that you'll own Zoom stock soon. Even if the price seems too high to justify buying shares directly for your portfolio, your S&P index fund won't have any qualms about doing so on your behalf.