Please ensure Javascript is enabled for purposes of website accessibility
Log In Help Join The Motley Fool
Free Article Join Over 1 Million Premium Members And Get More In-Depth Stock Guidance and Research
By Royston Yang - Updated Apr 27, 2020 at 11:13AM

One secret to achieving great investment results is to purchase businesses that are suffering from temporary setbacks.

It's hard to buy shares of a great business at a discount. Market leaders are usually followed closely by investors and analysts, and their dominance often generates a steady flow of strong financial results, as well as market optimism -- both of which can keep valuations at lofty levels.

But sometimes an event or incident comes along that temporarily depresses the financial results or sentiment surrounding such companies, presenting a golden opportunity for investors to acquire shares of well-run companies struggling through difficult but surmountable conditions. Starbucks (SBUX -1.17%) is one such stock, and it's one I would pounce on right now. 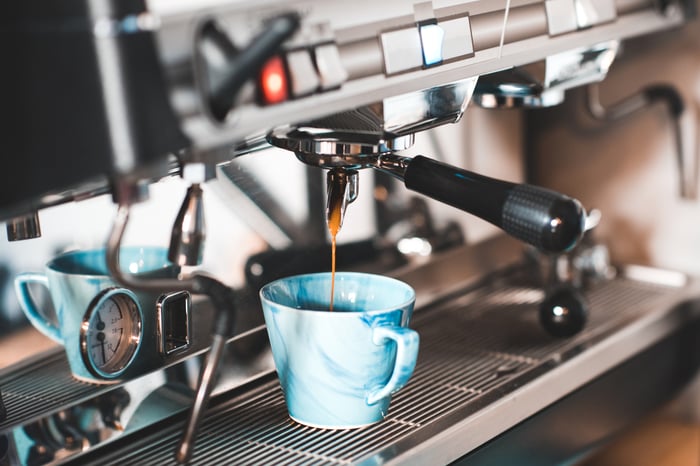 In late January, when the novel coronavirus pandemic seemed to be largely affecting just China, Starbucks temporarily closed more than half its stores and reduced operating hours at others. The progressive closure of more stores resulted in peak closures of approximately 80% of Starbucks stores by early February. By early March, more than 90% of the company's China stores had reopened but were operating under elevated safety protocols.

U.S. stores began to temporarily close from mid-March as the pandemic spread to North America. At quarter's end, 58% of U.S. company-operated stores were drive-through locations, of which 76% remained open. However, during the last week of March, comparable-store sales plunged by 60% to 70%.

These widespread closures will severely impact Starbucks' financial performance for the current quarter. Depending on how the pandemic pans out, there could be a lingering adverse impact on future quarters as well. The company will provide an update on guidance April 28 when it reports on the second quarter for its fiscal 2020.

The closures represent a temporary but sharp hit to Starbucks' operating and financial performance. However, I believe that Starbucks has a strong brand franchise and track record in managing crises, coupled with excellent management. These attributes will allow the company to bounce back from the pandemic much faster than its competitors might.

At the end of the company's first quarter, which ended Dec. 29, it had 18.9 million active Starbucks Rewards members. This group represents the core base of customers for the company that will remain loyal even though its stores have been temporarily closed. Starbucks has been combining artificial intelligence with marketing initiatives to continue to grow its membership base.

The level of personalization and customization is impressive and will lure customers back again in droves once the lockdown has been lifted.

CEO Kevin Johnson is keen to expand the company's menu to offer more plant-based options for customers. During Starbucks' first-quarter conference call, COO Rosalind Brewer said the company will be introducing a breakfast sandwich with a plant-based patty in both the U.S. and Canada, in line with what customers are asking for.

Just recently, Starbucks announced that it would roll out a new plant-based lunch menu in China. This move is a collaboration between Starbucks and Beyond Meat and will feature a new lunch menu with pastas and lasagnas using Beyond Meat's plant-based beef products. The menu will also include dishes from OmniPork, a plant-based pork alternative brand. Nondairy lattes using oat milk will also be added.

A great business suffering from a temporary setback

As of Friday's close, Starbucks' stock was trading for less than 25 times its trailing-12-month earnings, which is below its five-year average of 28.6. While we can't take earnings stability for granted amid the current tough COVID-19 response, there's good reason to think Starbucks will remain resilient.

The pandemic situation remains fluid. There is no way of knowing when Starbucks' closed stores can reopen. Even when they do, foot traffic might not immediately return to pre-pandemic levels. However, investors should view the pandemic as a temporary setback that makes the company's shares much cheaper to own. As long as the long-term prospects of the business remain fundamentally sound, investors should take the opportunity to accumulate shares on the cheap.