Please ensure Javascript is enabled for purposes of website accessibility
Log In Help Join The Motley Fool
Free Article Join Over 1 Million Premium Members And Get More In-Depth Stock Guidance and Research
By John Ballard – May 5, 2020 at 12:40PM

Online sales were a bright spot among an otherwise disastrous first quarter earnings report for the clothing manufacturer.

The first quarter was challenging for Hanesbrands (HBI 1.02%). While sales were down sharply, the bright spot for the quarter was online sales. During the conference call to discuss the results released last week, CEO Gerald Evans said: "We've seen generally a doubling of sales over the last few weeks to a normal level on our online sites."

The standout has been the Champion brand. Evans said: "In the case of champion.com, for example, we've seen a tripling of rate, and we're getting the rates that are at the Black Friday or Cyber Monday range." 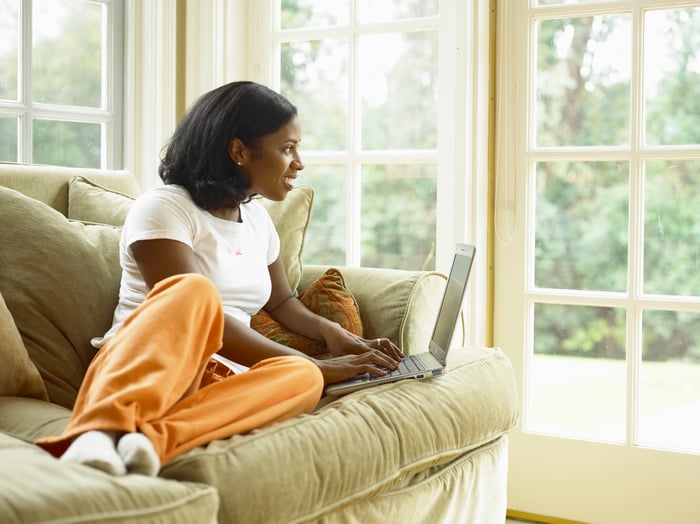 The Champion brand has been a hot seller over the last couple of years. Even with stores closed, consumers are seeking out the brand wherever they can find it. "As some of the brick-and-mortar outlets went down, they found our site, and they've been buying very aggressively [...], looking for the brand they love," Evans said.

Evans also made the point that the surge in online sales suggests that some consumers are out there willing to spend. It's unclear how quickly consumer discretionary spending will recover when the economy reopens, but the recent surge in online sales is a good indicator of the strength of the brand in the current environment.

Some of the increased demand is likely coming from people hanging up their work attire for comfortable sweats while working at home. Management said it is seeing strong demand on maidenform.com and hanes.com, too.

Total online sales in the first quarter were up 5% year over year, while total revenue was down 17%. The company also disclosed that the sales acceleration in the last two weeks of March continued into April.

A wider view of Champion's growth

Excluding the effect of store closures from COVID-19 and adjusted for currency changes, global Champion sales were on pace to grow approximately 7% year over year for the first quarter. The Champion brand is a significant long-term growth driver for Hanesbrands, but total Champion sales decreased 11% in the quarter on a constant currency basis, reflecting the store closures in the last few weeks of March.

Hanesbrands just entered an exclusive multi-year agreement to distribute C9 Champion through Amazon.com. C9 Champion is a product line that is focused on value and sold through mass retailers. It was launched on a small basis, but Evans said it has performed up to expectations so far. "I think we're both very pleased with where it is, and we'll see how it ramps," Evans said.

The partnership with Amazon comes after Hanes finally exited its distribution agreement with Target in January 2020.

Over the last few years, Champion has been a fast grower. In 2019, Champion sales surged 40% on a constant currency basis, excluding C9 Champion sales in the mass channel. Champion reached $1.9 billion in annual sales last year, or 27% of Hanesbrands' total business.

Given the uncertainty in the short term, management is not giving guidance. The store closures in the last two weeks of March cost Hanesbrands $181 million in sales and wiped out all its profit, so the second quarter will almost certainly be worse than the first quarter. But management believes the second quarter will be the low point for sales and earnings performance.

Based on stress tests the company conducted across multiple economic scenarios, management believes it has enough liquidity to get through the crisis even if stores remain closed through early October.

Consumer-directed sales totaled just 12% of total revenue last year. While Hanesbrands is still mostly dependent on retail traffic, it's growing e-commerce business through its own websites, and retail partners give it a much-needed respite in the current environment.