Please ensure Javascript is enabled for purposes of website accessibility
Log In Help Join The Motley Fool
Free Article Join Over 1 Million Premium Members And Get More In-Depth Stock Guidance and Research
By Keith Speights – Updated May 6, 2020 at 1:18PM

The cannabis industry has been hit pretty hard by the impact of the COVID-19 pandemic. But Scotts Miracle-Gro (SMG -2.75%) isn't a typical cannabis stock. Its shares are up more than 20% year to date.

Scotts reported its fiscal 2020 second-quarter results before the market opened on Wednesday. The company yet again delivered good news for investors. Here are the highlights from Scotts Miracle-Gro's Q1 update. 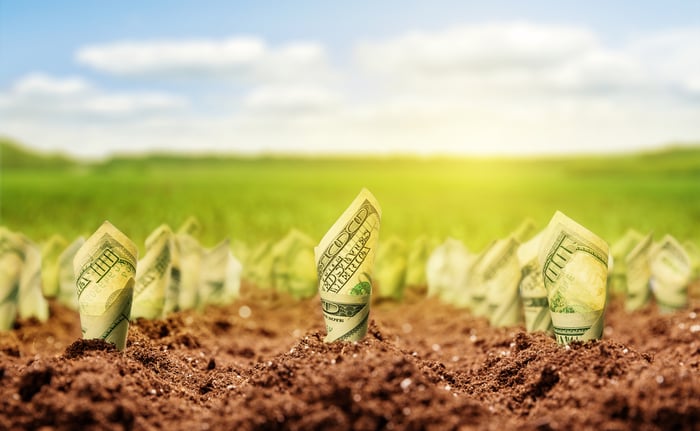 The company announced Q2 net income of $249.8 million, or $4.43 per share, based on generally accepted accounting principles (GAAP). This represented a decline from GAAP earnings of $396.9 million, or $7.10 per share, reported in the same quarter of 2019.

On a non-GAAP adjusted basis, Scotts' net income in the second quarter totaled $253.8 million, or $4.50 per share. This reflected solid improvement from adjusted net income of $203.2 million, or $3.64 per share, recorded in the prior-year period. It also handily beat the consensus Wall Street adjusted earnings estimate of $4.19 per share.

The company's Hawthorne segment, which focuses on the cannabis industry, was responsible for a lot of Scotts Miracle-Gro's growth in the second quarter. Hawthorne's sales soared 60% year over year to $230 million. Scotts CEO Jim Hagedorn said that Hawthorne continues to "see gains in all product categories and we continue to significantly outperform the competition."

However, Scotts Miracle-Gro still generates most of its revenue from its consumer lawn and gardens business. The company reported that U.S. consumer segment revenue jumped 11% year over year to $1.1 billion.

What about that year-over-year decline in GAAP earnings? It stemmed mainly from a boost to the prior-year GAAP results due to Scotts' divestiture of its minority interest in TruGreen.

Also, Scotts stated that it recognized around $4 million in expenses related to the COVID-19 pandemic that were excluded from its adjusted earnings per share. These expenses include additional premium pay for its sales team and workers in its manufacturing and distribution facilities. CFO Randy Coleman said these pay adjustments were made to "recognize the sacrifice" that the company's front-line workers are making during the coronavirus outbreak.

The future now looks even brighter for Scotts Miracle-Gro after its strong Q2 performance. The company raised its full-year 2020 guidance. It projects revenue will increase by 6% to 8% in 2020, compared to its previous guidance of a full-year revenue increase of between 4% and 6%. Scotts continues to expect non-GAAP adjusted earnings for the full year to be between $4.95 and $5.15 per share.

Most of the additional anticipated growth will come from Hawthorne. Scotts looks for Hawthorne's sales to increase between 30% and 35% in 2020, up from its previous guidance of full-year growth for the segment between 12% and 15%.

The company's core lawn and garden business should also perform well. Hagedorn said that consumer purchases have "remained strong" during April despite stay-at-home orders throughout much of the U.S. He also noted that for the week ending May 3, Scotts posted its best seven-day period in the company's history with consumer purchases topping $190 million at its four largest retail partners.