Please ensure Javascript is enabled for purposes of website accessibility
Log In Help Join The Motley Fool
Free Article Join Over 1 Million Premium Members And Get More In-Depth Stock Guidance and Research
By Dave Kovaleski - May 19, 2020 at 9:33AM

Will the white shoe firm's purchase of E*Trade pay off?

Morgan Stanley (MS -0.87%) made a big splash in mid-February when it announced plans to buy E*Trade (ETFC) for $13 billion. The deal is still pending, but when it closes later this year, the investment bank will have more than $3 trillion in assets under management, including E*Trade's $360 billion, and an expanded presence in the digital brokerage and bank space.

Morgan Stanley got no significant stock bump from the news of the acquisition or a strong fourth quarter as the COVID-19 pandemic hit the broader market hard shortly after the Feb. 20 announcement. The company's stock price is down nearly 21% year to date, but where does it go from here?

An A for E*Trade?

In the long run, the E*Trade deal should be good for Morgan Stanley. It complements the company's wealth and investment management, which accounts for about 57% of the firm's earnings. That percentage has grown from 26% in 2010, which makes the firm more vulnerable to market fluctuations and the kind of economic slowdown we are seeing now. The more stable revenue stream from E*Trade is not as tied to the movements of the markets. The 5.2 million customer accounts E*Trade brings in to the company are made up of every-day, self-directed investors. The addition will give Morgan Stanley the foundation to compete in the arena for the "mass affluent" segment of the trading populace. As the first quarter showed -- when the company had a record number of new accounts with 363,214, a 169% increase over the previous year's first quarter -- it balances out Morgan Stanley's portfolio. 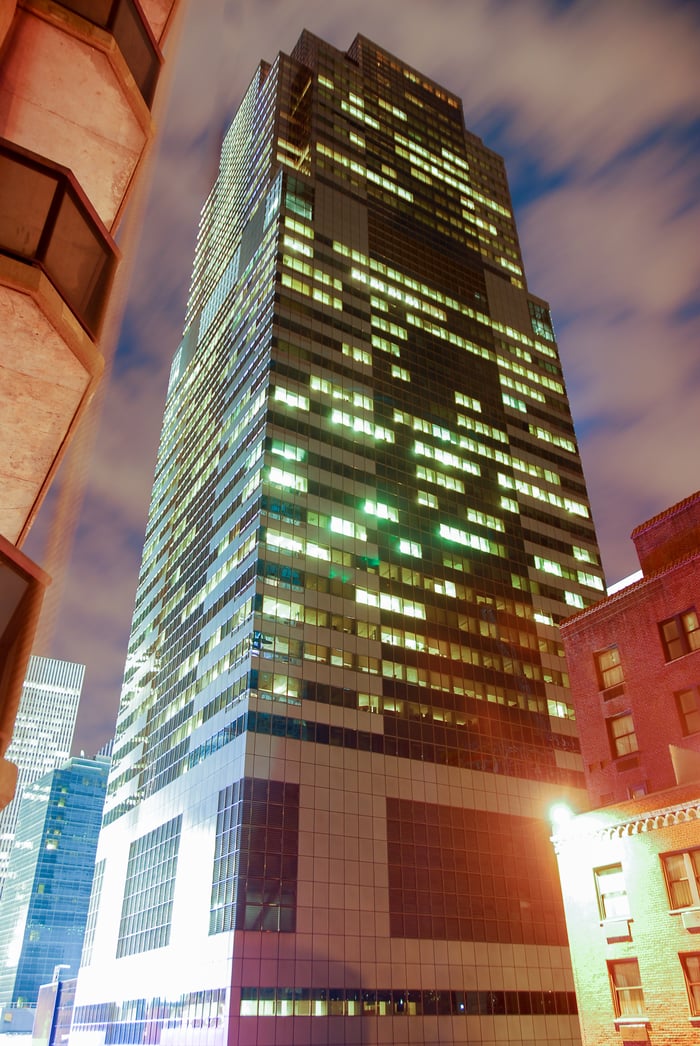 When the deal was announced in February, Morgan Stanley Chairman and CEO James Gorman said this move "continues the decade-long transition of our firm to a more balance sheet light business mix, emphasizing more durable sources of revenue."

Further, there are cost benefits as the combined company will save about $400 million through efficiencies gained through optimizing technology infrastructure, corporate services, and other expenses. In addition, E*Trade brings $56 billion in deposits to Morgan Stanley, which gives it more funding to provide loans to its high net-worth clients at a cheaper rate than before, as well as an additional revenue stream and opportunity for growth in online banking.

In the near-term, these will be challenging times for Morgan Stanley. The combination of lower asset values and balances, near 0% interest rates, and economic uncertainty hurting M&A activity will continue to place a drag on Morgan Stanley's earnings. Even when the E*Trade deal closes in the fourth quarter, it will still be tough sledding due to continued economic uncertainty. Plus, the deal won't add to Morgan Stanley's earnings for at least two years, some analysts say, as the company goes through the integration process. Until then, book value per share will be diluted. It is why the stock's P/E ratio has dropped from around 10 at the end of 2019 to 7.86 as of May 15.

Like much of the financial sector at the moment, the stock is pretty cheap and undervalued, but don't expect much in the way of earnings growth for a while. It's probably not a stock to seek out and buy right now, but if you're holding it, the added scale and expanded scope will provide long-term value.