Please ensure Javascript is enabled for purposes of website accessibility
Log In Help Join The Motley Fool
Free Article Join Over 1 Million Premium Members And Get More In-Depth Stock Guidance and Research
By Royston Yang – May 28, 2020 at 8:29AM

It's a bad idea to let go of great businesses that can compound your wealth over the long term.

Choosing great growth companies is a great first step in investing, but it's not sufficient if you wish to enjoy years of compounding. But even more important is the ability to resist the urge to sell too soon and instead hold on to those shares as the company goes from strength to strength. Many an investor has regretted parting with their winners too early and then seeing the stock soar as its earnings and cash flows consistently improve.

What you do need to be careful about, though, is whether you have chosen the right companies to buy and hold. Businesses with weak competitive moats and an inability to compete and adapt well to changes in the economic environment do not count as good candidates for a robust investment portfolio. Investors need to keep an eye on business performance and management's actions and plans to ensure that the investment thesis remains valid.

Here are two examples of stocks that I will never think of selling. 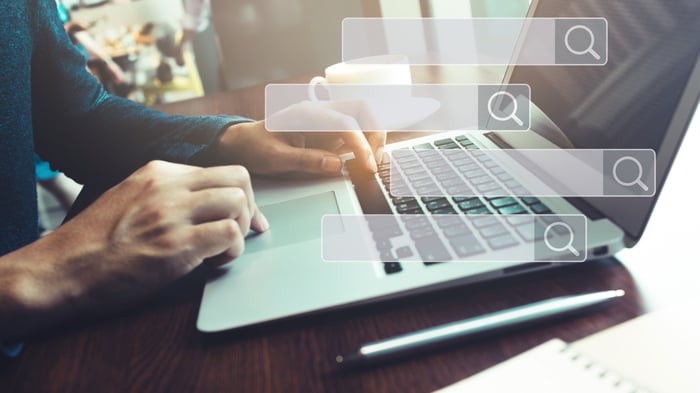 Alphabet (GOOGL 2.62%) (GOOG 2.70%) has grown over the years to become a monster of a technology company. The company owns the extremely popular search engine Google, as well as video-sharing platform YouTube, and earns money through advertising and cloud services. The growth of the company has been nothing short of phenomenal -- if you had bought a share of Alphabet back in 2004, you would have seen your wealth multiply by nearly 30 times!

Google captures the bulk of internet search traffic, while YouTube is one of the most visited video websites today. Alphabet continues to grow, reporting revenue of $41.1 billion, up 13% year over year, for the first quarter of 2020. Net income stood at $6.8 billion for a very respectable net income margin of 16.6%.

The company's standing as a premier search engine and cloud services provider was already unchallenged before the pandemic. Social distancing restrictions have accelerated these trends, and this acceleration will benefit Alphabet even more strongly in the years to come. As more people work and study from home, related search activity at its peak was four times greater than during the peak of the Super Bowl, said CEO Sundar Pichai. Furthermore, 100 million students and educators are using Google Classroom, and the company is adding roughly 3 million new users daily for its secure videoconferencing platform, Google Meet.

Aside from its core business, Alphabet also has a smaller "other bets" division that invests in and nurtures new technologies. Examples include a self-driving vehicle business under Waymo, harnessing renewable energy using propellers on airborne "kites" (Makani Technologies), and developing algorithms for e-commerce and games using DeepMind, a U.K.-based unit dealing with artificial intelligence.

Nike (NKE 2.50%) is a pioneer and innovator in the sports footwear and apparel industry. Over the years, it has grown from its humble beginnings to become a brand name synonymous with top athletes and Olympic Games winners. The company's strength lies not only in its wide, global distribution network but also in building up its digital sales platform.

Its digital initiatives have served it well in the era of COVID-19. In Nike's fiscal Q3 2020 earnings call, CEO John Donahoe said that weekly active users across all Nike apps were up 80% by the end of the quarter, while the company's digital business in China grew more than 30% as the lockdowns there were implemented. These numbers demonstrate Nike's digital strategy is deepening engagement with its customers and making online saling more effective

Although the pandemic is causing massive disruption to well-established practices and habits, the need to exercise to keep fit will probably not change much even after the crisis ends. People will still look for a pair of trainers to go for a jog in the morning, or put on a sports T-shirt while playing basketball or tennis. The world is also seeing a shift toward healthier diets and lifestyles, including the introduction of plant-based products in cafes and restaurant chains. This trend should see demand for sports equipment and related products increase over a sustained period.

Nike's innovations -- such as its Vaporfly shoe -- put it at the forefront of shoe technology and cement its brand name as one of the most desirable in the market for many years to come.

Too much of a good thing can be wonderful

Both Nike and Alphabet are dominant in their respective industries, and also possess characteristics and catalysts that can enable them to grow consistently over the long term. Selling these two businesses prematurely could result in an investor losing out on big potential gains.