Beyond Meat (BYND -4.14%) saw its shares surge 29% in May, according to data provided by S&P Global Market Intelligence. This rise came after the plant-based food company reported a sparkling set of earnings for the first quarter of 2020, with revenue soaring 141% year over year to $97.1 million, along with net income of $1.8 million.

The surge in May takes Beyond Meat's shares up nearly 70% year to date, and the company looks poised to post more growth ahead, despite the disruptions caused by the COVID-19 pandemic. 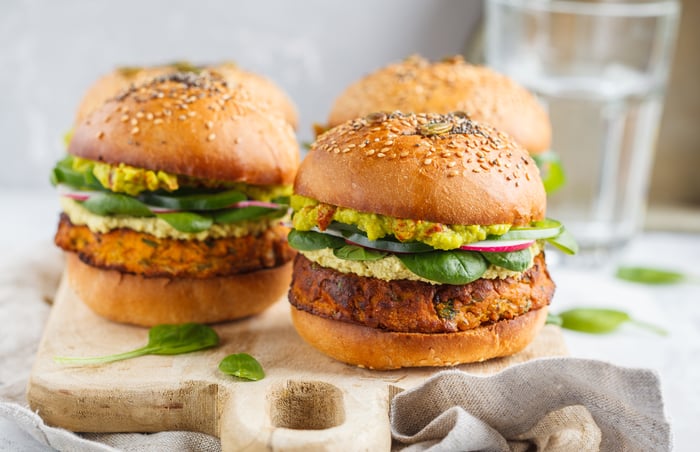 Although Beyond Meat was impacted negatively toward the end of the first quarter as the pandemic took hold, it still managed to achieve impressive revenue gains. This growth was driven by an increase in volumes but was offset somewhat by lower price points. The number of distribution partners also increased both domestically and internationally, propelling international retail revenues up 50 times year over year to $5.9 million.

In the company's Q1 earnings call, CEO Ethan Brown commented that Beyond Meat has managed a 7.7% increase in market share for the 12 weeks ended March 22, 2020. During the four weeks when customers started stockpiling food in anticipation of nationwide lockdowns, Beyond Meat's product sales rose 233% year over year, vastly outperforming the plant-based meat category's growth rate of 93%.

The company has sustained momentum in growing its distribution channels, with sales to 94,000 outlets worldwide as of March 2020, more than tripling from the 31,000 outlets at the company's IPO back in May 2019. Total brand awareness has also jumped significantly, from 23% at IPO to 52% as of January 2020.

Beyond Meat has set its sights on growing in the Middle Kingdom, with the recent April 22 launch of Beyond Beef items at Starbucks throughout China. In addition to this partnership with Starbucks, Beyond Meat has also finalized a distribution agreement with a leading local distributor, Sinodis, to distribute plant-based food products across retail and food service outlets.

Investors should note that the pandemic may temporarily impact Beyond Meat's revenue and earnings growth due to supply chain disruptions and the closure of food service outlets, but with the strong momentum the company has established, it should be able to recover from these challenges and continue to do well over the medium term.