Please ensure Javascript is enabled for purposes of website accessibility
Log In Help Join The Motley Fool
Free Article Join Over 1 Million Premium Members And Get More In-Depth Stock Guidance and Research
By Howard Smith – Jun 8, 2020 at 8:36AM

The airline announced in late May that it would need to cut thousands of jobs to match demand.

American Airlines Group (AAL -2.95%) is preparing severance packages for upper management workers that get laid off as the company prepares to adjust its business to a lower demand environment, reports CNBC. The company announced in late May that it would need to cut 30% of management and administration jobs, as it believes demand for travel will be suppressed for years before returning to pre-pandemic levels.

This planning comes as near-term demand for travel has seen an uptick as the U.S. and other countries begin reopening economies after lockdown restrictions were in place to prevent the spread of the COVID-19 virus. Last week, American said that it was adding back some capacity for summer travel as May data showed an increase in customer demand. 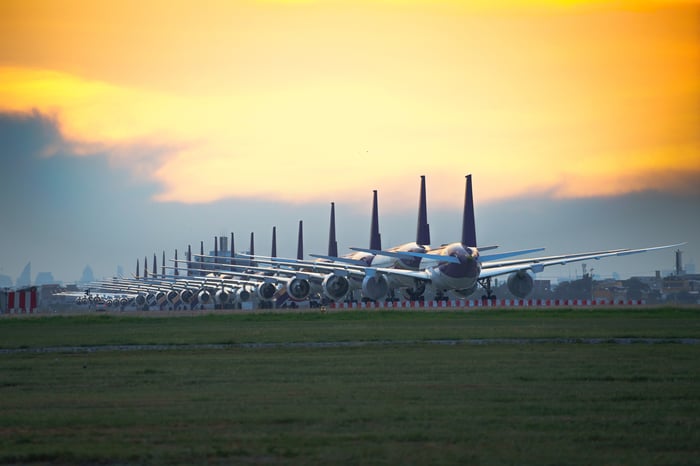 After May flights showed a 71% increase in average daily customers compared to April, 2020, the airline said that it plans to be at 55% of domestic capacity in July, compared to last year. The company is also offering travelers a "Summer of Deals" promotion for travel prior to Sept. 30, 2020. To double frequent flier mileage, fliers must book flights in June 2020 and register for the promotion.

However, with capacity still expected below pre-pandemic levels, the airline announced it is planning staff reductions of 5,000. American's executive vice president of people and global engagement said, "we must plan for operating a smaller airline for the foreseeable future." It hopes to get volunteers to accept buyouts by its deadline of this Wednesday, June 10.

If it must turn to involuntary job cuts, the airline is planning severance packages for high-level employees that include nine months of pay and over two years of health coverage, according to the CNBC report.