Please ensure Javascript is enabled for purposes of website accessibility
Log In Help Join The Motley Fool
Free Article Join Over 1 Million Premium Members And Get More In-Depth Stock Guidance and Research
By Adam Levine-Weinberg – Jun 11, 2020 at 8:20AM

With COVID-19 having crushed brick-and-mortar retail, mall REIT Simon Property Group is trying to wriggle out of a multibillion-dollar acquisition.

Shares of Taubman Centers (TCO) doubled in February, after top mall REIT Simon Property Group (SPG -2.17%) agreed to buy all of Taubman's publicly traded stock at a big premium. Taubman shares traded for around $26 at the end of January, but Simon offered to pay $52.50 per share for an 80% stake in the upscale mall owner. (The founding Taubman family would retain the other 20%.)

As a result, Simon Property Group now wants to back out of its deal to buy Taubman. On Wednesday, the REIT announced that it was terminating the agreement and requesting a court declaration that Taubman had suffered a material adverse event that would permit such a termination. As a result, Taubman stock plunged as much as 41% on Wednesday -- bottoming out at $26.70 -- before recovering to end the day down 20% at $36.17. 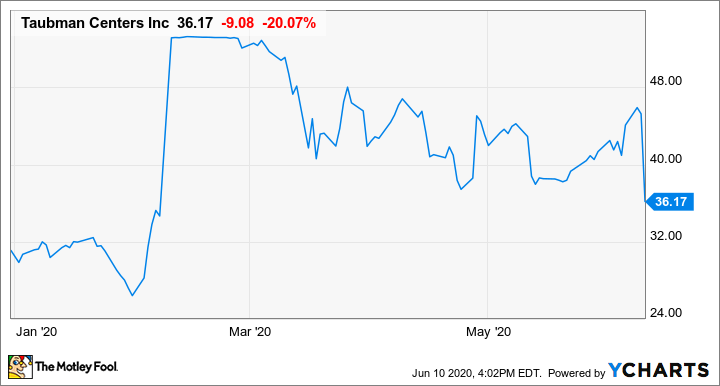 Let's see what this development means for investors in these two mall REITs.

It's not very surprising that Simon wants to back out of its agreement to acquire Taubman. When the two companies announced the buyout deal on Feb. 10, they said that it reflected a 6.2% cap rate based on projections for Taubman's net operating income.

At the time, a 6.2% cap rate might have seemed reasonable to both sides. Taubman owns some of the most productive malls in the U.S.: sales per square foot reached $972 for its domestic properties last year. Just a few years ago, top-tier malls were often valued at cap rates of 4% or 5%. (Lower cap rates imply higher valuations.) More recently, investors have demanded higher cap rates to compensate for the risk posed by a rising tide of retail bankruptcies. As of February, a 6.2% cap rate was cheap enough -- given the quality of Taubman's portfolio -- to be attractive to Simon, while still representing a substantial premium over Taubman's share price.

However, the COVID-19 pandemic forced most malls to close in March. While many have reopened, traffic is likely to remain weak for quite some time. Many mall tenants are playing hardball with landlords like Simon and Taubman, arguing for rent reductions in light of the abrupt drop in mall traffic. Others simply failed to pay their rent in April and May. Some will go bankrupt due to the impact of the pandemic. The likely result is falling occupancy and a decline in average rents: even for high-quality malls.

That means the baseline for net operating income has declined. Thus, Simon Property Group's offer price effectively values Taubman at an even lower (i.e. more generous) cap rate. Yet Taubman's properties could require substantial investment to get back to their pre-pandemic level of performance, which implies that the appropriate cap rate is actually higher than it was a few months ago. Simon itself currently trades at an implied cap rate of about 9.5% based on 2019 NOI.

Bring in the lawyers

In its Wednesday press release, Simon indicated that two of those exceptions may apply. First, it said that the pandemic "has had a uniquely material and disproportionate effect on Taubman compared with other participants in the retail real estate industry." That would constitute grounds for terminating the deal. Second, Simon argues that Taubman breached its obligations by failing to operate its business effectively, "including by not making essential cuts in operating expenses and capital expenditures."

As for the second claim, Taubman may argue that maintaining capex is necessary to preserve the value of its properties. Operating expense reductions (or the lack thereof) wouldn't have been all that significant, and it would always be possible to implement cost cuts going forward. It's far from clear that Taubman's failure to aggressively cut costs represents a material breach of its responsibilities.

Is it all a negotiating stance?

Not surprisingly, Taubman Centers put out a press release on Wednesday stating that it "intends to hold Simon to its obligations under the Merger Agreement and the agreed transaction, and to vigorously contest Simon's purported termination and legal claims." In the short term, litigation seems inevitable.

However, some analysts have suggested that the termination notice is really just a negotiating tactic. Taubman's portfolio continues to have substantial long-term value, and Simon has the financial wherewithal to go through with the acquisition. The mall giant may just be holding out for a better price.

Taubman probably has a better legal case than Simon, but litigation is expensive, time-consuming, and the results are never certain. Furthermore, Taubman has more to lose. It wouldn't be that terrible for Simon if it were forced to go through with the acquisition. By contrast, Taubman doesn't have a great plan B. Considering the impact of the pandemic, there's no way it is worth anywhere close to $52.50 per share on a stand-alone basis.

Thus, I expect this litigation to be settled. The acquisition price could be negotiated down or Simon may pay a breakup fee to compensate Taubman for its trouble and avoid the risk of losing in court. Either outcome would be better for Simon than going through with the deal at $52.50 per share. Until the legal issues are resolved one way or the other, Taubman Centers stock is likely to remain quite volatile.