Please ensure Javascript is enabled for purposes of website accessibility
Log In Help Join The Motley Fool
Free Article Join Over 1 Million Premium Members And Get More In-Depth Stock Guidance and Research
By Rick Munarriz – Jun 13, 2020 at 9:00AM

These are challenging times for big media stocks. Disney (DIS -1.39%) and Comcast (CMCSA -2.98%) are doing just fine with their stay-at-home businesses. Disney+ has been a hit since its November debut, and its cash-cow media networks segment is holding up fine in terms of viewership with ABC, ESPN, and other cable properties.

Comcast has even more in play with homebound consumers. Its Comcast Xfinity segment -- the country's leading provider of cable television and broadband connectivity -- accounted for 56% of the revenue and 75% of the adjusted earnings before interest, taxes, depreciation, and amortization (EBITDA) in its latest quarter. No one is giving up their internet access these days, and even the cord-cutting revolution is hitting the pause button as folks cling to their cable television subscriptions with so much time to consume entertainment at home.

Things get hairier for both companies when we head out of the home, but that's what makes a battle against two media moguls with somewhat similar empires as entertaining as the content they provide. Is Disney or Comcast the better buy? Let's go channel surfing to find out. 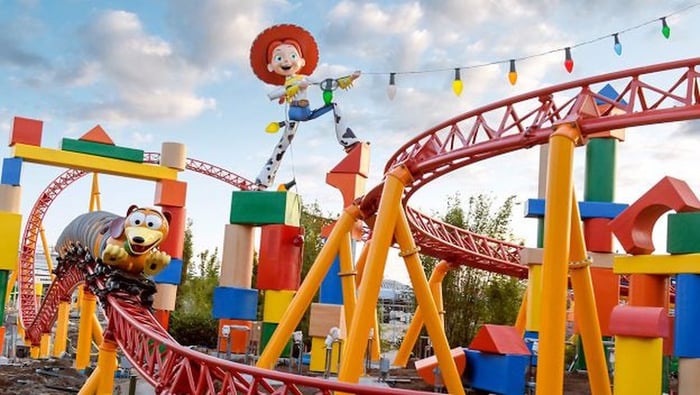 Comcast and Disney have a lot in common. They both completed huge acquisitions a little over a year ago. Disney shelled out $71.3 billion for key film and TV assets held by Twenty-First Century Fox that closed in March of last year. A few months earlier, Comcast completed a $39 billion deal to increase its stake in European pay-TV giant Sky to $39 billion. The two deals inflated top-line growth for the first 12 months, making it tricky to use revenue growth as a measuring stick for success.

Both companies also manage theme parks that have been closed for several months. Comcast's Universal Orlando reopened last week, with Universal Studios Hollywood, as well as Disney resorts on both coasts expecting to start greeting park guests next month. The theme-park business will be a drag under the new normal.

Another business where both companies are feeling the pinch in the wake of the global pandemic is studio entertainment. Disney routinely puts out some of the most watched movies. It had all six of last year's biggest box-office draws.

Comcast's NBCUniversal is no slouch, especially when it whips out a new installment in its Jurassic Park franchise. You have to go all the way back to 2011 to find the last time when it wasn't a Disney or Universal film as the country's top earner. With most movie theaters closed and the social distancing measures likely in place when your local multiplex fires up its digital projectors again, this is another segment that will weigh on both companies.

When it comes to weathering the pandemic in the near term, the clear winner is Comcast. Now that we have lapped the one-year anniversary of the Sky and Fox transactions, we're getting a clearer snapshot of organic growth -- and it favors Comcast. Analysts see Disney's revenue declining 37% for the period ending this month and 16% in the following quarter. Comcast is only expected to see a 12% top-line decline in the current quarter and an 8% slide for its third quarter.

Looking beyond the next few quarters, Disney has the stronger hand. NBCUniversal is unlikely to have the same initial success with Peacock that Disney had with Disney+. Disney has a broader arsenal of blockbuster franchises when filmed entertainment comes around again. Comcast should continue to hold up well as an internet provider, but its cable television stronghold will probably never be a growth business again.

Comcast has more all-weather appeal, given its more recession-resistant cable and broadband businesses. It's trading just 18% below its 52-week high, a better fate than Disney, which is trading at a 25% discount to its pre-Thanksgiving highs. The 2.3% dividend yield also helps argue in favor of Comcast.

If you feel that the global economy will continue to be held back for a long time, Comcast will be your better buy. However, if you feel that business will bounce back within your investing horizon, then Disney will be the better play.

As a long-term investor with an upbeat outlook beyond the next rough year or two, I'm going with Disney as the better buy, but I wouldn't be surprised if both stocks wind up beating the market.