Please ensure Javascript is enabled for purposes of website accessibility
Log In Help Join The Motley Fool
Free Article Join Over 1 Million Premium Members And Get More In-Depth Stock Guidance and Research
By Billy Duberstein – Jun 18, 2020 at 6:40AM

The South American e-commerce and payments leader will continue to grow in exciting ways.

Shares of South American e-commerce and payments leader MercadoLibre (MELI -0.23%) has been on a tear this year, up 61.5% for 2020. Investors were initially wary of how the coronavirus might hit the company, sending shares down in the initial March plunge.

Even though MercadoLibre is an e-commerce company, which should theoretically benefit from the stay-at-home economy, MELI's e-commerce business had traditionally skewed toward bigger-ticket items, which may be in less demand in a recession. And in recent years, MercadoLibre's payments, finance, and ad businesses have grown to become an even bigger part of the MercadoLibre empire, and all of these economically sensitive businesses were called into question as the world headed into a recession.

Yet MELI's stock turned around in a big way in April, then accelerated in May after MELI's first quarter earnings report on May 5. Management reported activity returning to growth on its e-commerce platform, and payments volume actually continuing its torrid growth as the "stay-at-home" economy pushed people more and more toward electronic payments solutions and away from cash.

Yet with the stock at all-time highs and trading at a not-very-cheap 18 times sales, its important to know what to expect out of the company over the next five years in order to judge whether MELI still makes a fine investment today. Should the company succeed in growing and integrating the following business segments, and its high-priced stock could still make for a good buy, given low penetration for e-commerce and e-payments in the less-developed South American region. 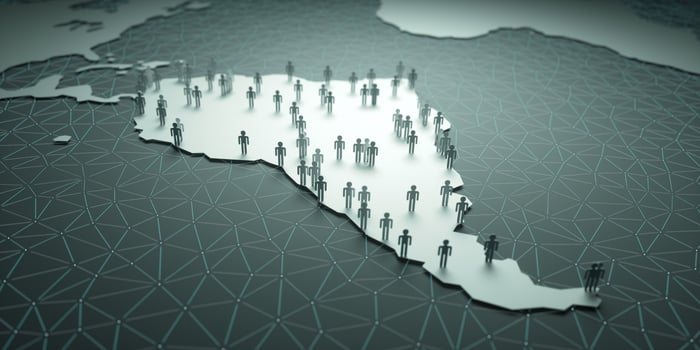 The COVID-19 outbreak spurred huge demand for fast-moving consumer goods (FMCG) throughout the world, which ran right into MercadoLibre's plans to make further inroads into this category. Traditionally, MercadoLibre's platform had catered to bigger-ticket items, with fast-moving consumer goods only accounted for a "mid-single digits" portion of platform revenue as of last year.

However, plans were already under way to move more consumer staples though MELI's platform, and those plans got accelerated as MELI saw health products, consumer packaged goods and toys and games exceeding 100% year-on-year volume growth in some markets during the coronavirus lock-downs.

While management said that it didn't anticipate MercadoLibre going to fresh grocery or frozen foods any time soon, as JD.com (JD -1.85%) has done in China, management did say that the market for non-fresh, non-frozen essential goods still has plenty of room for growth in the region. CFO Pedro Arnt said there was the potential for MELI to eventually get into fresh or frozen groceries, but that these categories were probably "phase two or phase three," many years out from now.

Therefore, down the road, look for MercadoLibre to develop its consumer staples products more and more, while potentially launching more grocery and food within five years, should the "first phase" of non-perishable goods be successful. Getting Latin Americans to buy more staples through delivery services will be a key factor in enabling e-commerce take more of overall retail than the mere 4.2% market share it had in 2019.

Management also stated  it's looking to develop the consumer goods product portfolio within MercadoLibre's Envios logisitics platform, or even perhaps on a first-party basis, with MercadoLibre buying the inventory outright. That would be somewhat of a new move for the e-commerce giant, which had built its business as more of an eBay (EBAY -2.33%) – like platform. However, in order to expand its product categories and deliver better customer service, MercadoLibre is doing more of its own buying, fulfilling, and logistics, more akin to JD.com or Amazon.com (AMZN -1.57%).

You can see the effect on the company's margins, which used to  be  in the 20%-plus range but have essentially gone to zero over the past few years. However, the move has accelerated revenue growth, and the stock has mostly followed these red-hot revenue trends, validating management's strategy. 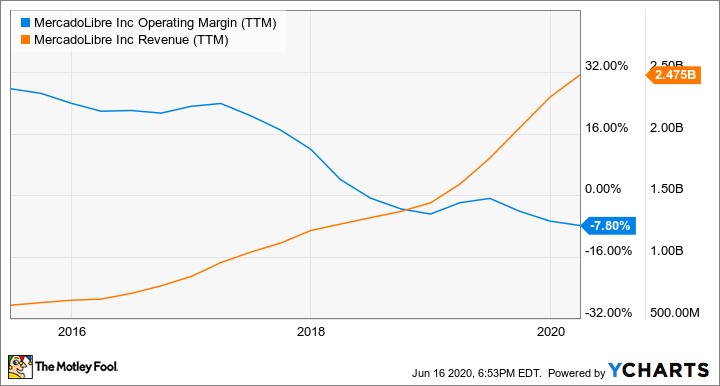 In just the past few years, MercadoLibre has gone from having virtually no logistics infrastructure to now having nearly half its volume coming through its own logistics network, including the 19.9% fulfilled through MercadoLibre's fulfillment centers and the 23.4% that is "cross-docked," or when MercadoLibre's trucks pick up goods directly from its vendor's manufacturing plant.

Management noted that its fulfillment network had drastically improved delivery times in major city centers, which could serve to accelerate e-commerce adoption, especially in the age of COVID-19:

I think what you're highlighting is simply a reflection of the tremendous work that's been done by the logistics team in terms of being able to service large urban areas that are relatively close to our warehouses as we grow the footprint of our own network in what we consider to be best-in-class times. So it's certainly new. This is recent, and really the improvements have been phenomenal. We're communicating it as we make sure that we can scale that efficiently. And we do think that will be a very strong part of the value prop, but not just for those categories, but rather across the board for all of our service offering.

In five years, look for MercadoLibre to own or fulfill even more of the goods and services sold through its platform. As the friction of buying and selling online improves and the customer experience gets better, look for more of the country's 650 million people to buy more stuff online, up from just about 155 million e-commerce users in 2019. Delivery and service quality had been one of the bigger obstacles to e-commerce adoption in Latin America, so should the company continue to get fulfillment and delivery right, look for MELI to accelerate e-commerce growth over the next several years, since e-commerce penetration is still relatively low in the region.

In addition to these positive e-commerce growth trends, look for MercadoLibre to continue to grow its payments and lending platforms -- businesses that have now become as large as its e-commerce platform, if not bigger.

Payments has also been an obstacle to digital e-commerce transactions, as these two emerging societal trends tend to reinforce each other. Latin America is much later in the war on cash than other advanced economies. In fact, last year 21% of LatAm e-commerce transactions were paid with cash – which actually entailed getting a cash voucher from a bank branch or convenience store! And according to the International Monetary Fund, only 55% of Latin Americans have a traditional bank account.

Capitalizing on the popularity of its Mercado Pago solution, which began as an escrow service to facilitate payments between buyers and sellers on its platform, MercadoLibre has expanded Pago into a payments and financial services powerhouse, with electronic payments available for online or off-line commerce, thanks to Mercado's point-of-sale terminals that accept Pago QR codes. MELI also recently developed its Mercado Pago digital wallet, which could potentially act as a checking account replacement.

In the recent quarter, management touted serious growth on all things payments, with Pago's mobile wallet user base growing 155% and total payment volume through the digital wallet up a whopping 299% to $1.3 billion. The company has also given Pago users access to asset management products under the Mercado Fondo brand, expanding this service from Argentina and Brazil to Mexico last quarter, through a new partnership inked with Mexico's Grupo Bursatil Mexicano. Meanwhile, the overall payments volume continued its incredible growth, clocking it at 82.2% last quarter, even in a quarter affected by COVID-19 during the last two weeks of March.

Given the lack of bank penetration in the region, MercadoLibre definitely has the opportunity to capitalize by offering credit to both consumers and merchants alike, enabled by all the data MELI has on how consumers and merchants make and spend money through its platforms. While the COVID-19 outbreak caused management to pull back on its newer lending initiative in the current quarter, the company's loan book of $177.6 million was still up a bit year-over-year. That's also a relatively small number when pondering the potential for comprehensive tech-based financial services across the entire region in the years ahead.

Therefore, five years out, expect Mercado Pago, Fondo, and Credito to continue to grow and evolve into a comprehensive fintech service platform. In that sense, MercadoLibre is really not so much the Amazon of South America, as it is half-Amazon, half-Square (SQ -1.63%) hybrid.

The ascension of payments and financial services can be seen in the company's non-marketplace segment, which consists mostly of financial services and has gone from about 40% of MercadoLibre's revenue to 50% in just a couple years.

All in all, investors should expect and hope for more of the same from MercadoLibre over the next five years, as it builds out an integrated ecosystem of e-commerce, logistics, payments, and financial services. Since one element enables the other, the powerful network effects should  effectively tie consumers and merchants alike to MercadoLibre, with tons of potential to cross-sell its different products and services.

In addition, look for MercadoLibre's management team to continue investing aggressively to capture new opportunities. Management could have scared  investors off by essentially taking its margins from 20% to zero as it built out its logistics and fulfillment platform across the region, but MercadoLibre's soaring revenue and stock price since then seems to have validated that decision. Expect more top-notch growth over the next decade as MercadoLibre continues widening its moat against would-be competitors in South American e-commerce and financial services.