Please ensure Javascript is enabled for purposes of website accessibility
Log In Help Join The Motley Fool
Free Article Join Over 1 Million Premium Members And Get More In-Depth Stock Guidance and Research
By Reuben Gregg Brewer – Jun 20, 2020 at 9:06AM

The company is a vital link in the gasoline space, but there's a notable problem with the business model that investors need to consider.

Sunoco LP (SUN -2.95%) falls into the midstream segment of the energy sector, helping to move vital energy commodities to the end markets they serve. However, it's not exactly your typical midstream name -- and that changes the dynamics here a great deal. Here's what you need to know before you consider buying Sunoco units.

Midstream-focused master limited partnership Sunoco owns a collection of distribution assets, all of which are basically centered around moving gasoline through to end customers (including trucking the fuel to individual gas stations). That's generally a pretty stable business, given that gasoline-powered automobiles are one of the largest and most used modes of transportation in the United States, the partnership's core market. 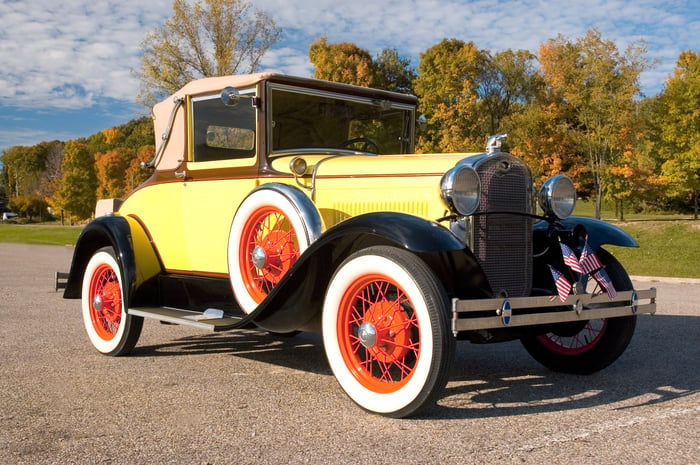 Yes, there's a long-term threat from electric vehicles that is very real. However, the transition to electricity is likely to be relatively slow, given that modern gasoline-powered automobiles generally last for 10 years or more. And, at least at this point, electric vehicles still make up a relatively small portion of the overall vehicle market. Energy industry giant ExxonMobil has pointed out that it took 100 years for oil to overtake coal as the world's primary energy source, suggesting that oil, and the things into which it gets turned (like gasoline), are not likely to be under imminent threat.

So Sunoco is highly likely to have a solid business for years to come, which might make its roughly-12% distribution yield sound attractive to dividend investors. Don't jump just yet, though -- there are some additional facts you need to know.

Every investment is a mixture of pros and cons, and that's no different here. The biggest issue at Sunoco really boils down to its balance sheet. Leverage in the midstream space is generally assessed using financial debt to EBITDA. Sunoco started the year with a financial debt to EBITDA ratio of around 4.8 times, which was toward the higher end of the midstream industry. By the end of the first quarter that ratio had risen to an even more worrying 7.4 times.

However, Sunoco didn't go on a debt binge; it was largely driven by a drop in earnings. In the first quarter the partnership lost $1.78 per share, compared to a profit of $1.07 per share a year earlier. EBITDA, strictly defined, fell sharply too. The main driver was an inventory writedown because of a drop in the value of the gasoline the company owned. That, in turn, was driven by the fact that demand for fuels fell as large portions of the U.S. economy were shut down to slow the spread of the coronavirus. But only a couple of weeks in the quarter were impacted by the drop in demand, with the real hit taking shape in April (and subsequent months). That means that the second quarter is likely to be much worse than the first. Notably, the partnership pulled its guidance for the year.

To be fair, EBITDA is probably a bit too strict a measure, which is why Sunoco provides adjusted EBITDA numbers, which take out certain one-time items. By that measure Sunoco had a great quarter, with its adjusted EBITDA figure up 60% year over year. A big piece of that is that the low price of gasoline has resulted in abnormally high margins. The company was able to cover its distribution by 1.8 times in the quarter, based on the partnership's math.

That math isn't inherently wrong, but it does paint the best possible picture. Debt compared is still elevated compared to other midstream partnerships, and that presents a problem when times get tough -- like they are today -- because it limits flexibility. Demand for gasoline tumbled in April (down 40% year over year) and May (down 30% year over year early in the month), so the worst is yet to come here.

Another way to look at the leverage issue is interest coverage. At the end of 2019 Sunoco covered its training interest expenses by around 2.5 times, toward the low end of the midstream space. That coverage fell to just 1.3 times or so by the end of the first quarter. That doesn't leave much breathing room. 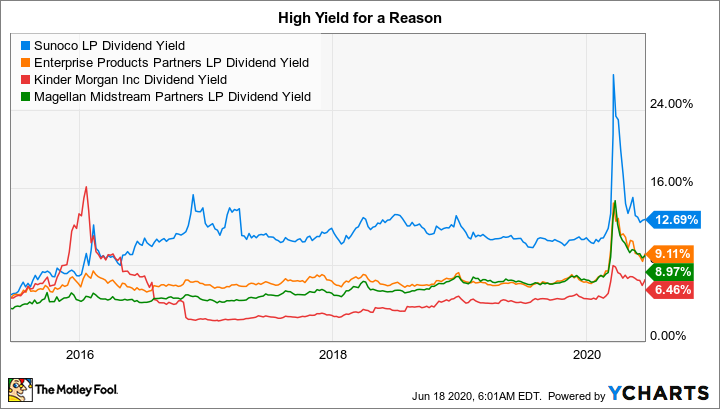 Sunoco's relatively heavy use of leverage isn't new, which is one of the reasons why it has generally had a high yield relative to more conservative peers. And it's why the yield is still relatively high today. Investors looking to buy Sunoco have to be willing to take on the risk that the partnership's leverage could leave it with little room to navigate through difficult waters -- which could end up meaning that it cuts the distribution to free up cash for other purposes.

There's no way to predict the future, so Sunoco could muddle through the current headwinds just fine. In fact, it may even get through every headwind in the future without any issues. But with a heavier debt load than other midstream players, it has more material headwinds to deal with going into any problem period. Most investors looking at the midstream space today would be better off taking a safety-first approach and shifting into less leveraged companies, many of which have historically high dividend yields today. There's no need to take on the added balance sheet risk here when you really don't need to -- the extra yield isn't worth it.