The e-commerce giant picked the name “Climate Pledge Arena” for the sponsored venue.

Looking to strengthen its green bona fides, Amazon (AMZN -3.01%) announced today it bought the sponsorship rights to Seattle's new multipurpose arena, changing its name from KeyArena to Climate Pledge Arena. CEO Jeff Bezos noted instead "of naming it after Amazon, we're calling it Climate Pledge Arena as a regular reminder of the importance of fighting climate change."

The arena will be the official home of Seattle's freshly minted NHL (National Hockey League) team. The team will be the 32nd member of the League and the 16th franchise in the Western Conference, making it equal in size to the 16-team Eastern Conference. Unveiling of the team's name was recently delayed again, with Sockeyes, Firebirds, and Whales among the possible choices.

Climate Pledge Arena will also become the official home of the Seattle Storm, a WNBA team. Concerts will also occur at the venue. 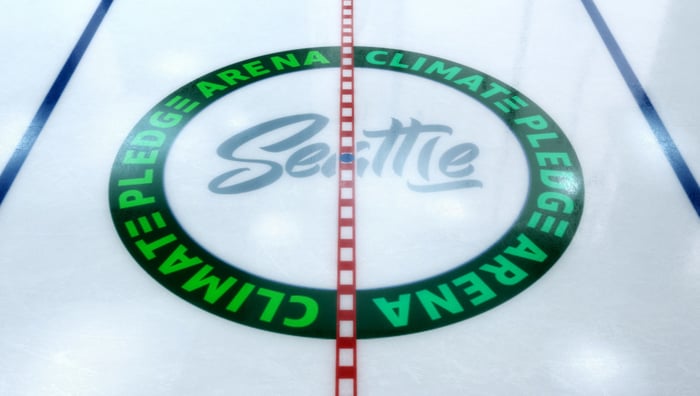 The arena includes many sustainable features, leading Bezos to describe it as "the first net zero carbon certified arena in the world," set up to "generate zero waste from operations and events, and use reclaimed rainwater in the ice system to create the greenest ice in the NHL."

Other environmentally-friendly aspects of the arena will include 100% renewable energy powering it, an attempt to achieve International Living Future Institute Zero Carbon certification, and local sourcing of 75% of food service ingredients from Seattle-area farmers.

Amazon sustainability chief Kara Hurst responded to queries about the expenditure by saying the arena sponsor "isn't the only thing we're doing" about climate change. The company has not disclosed how much it paid for the sponsorship rights, but says it will retain them for around a decade at minimum.