The House of Mouse scores a much-needed win by bringing the Broadway hit to streaming.

Lin-Manuel Miranda's smash Broadway musical Hamilton, a hip-hop retelling of the Founding Father's life, has notched yet another victory. Disney's (DIS -2.60%) movie version of the show has resulted in a surge in demand for its streaming service, Disney+.

Between Friday, July 3, and Sunday, July 5, the Disney+ app was downloaded 752,451 times globally and 458,796 in the U.S., according to data analytics company Apptopia. U.S. downloads were about 74% higher than the average of the four previous June weekends, while worldwide downloads were nearly 47% higher. 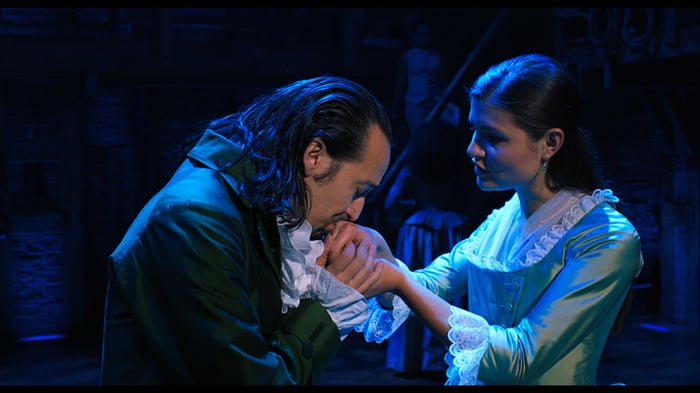 The impact was likely even greater than those metrics indicate. Apptopia pointed out that the global numbers don't include India or Japan, as Disney+ was rolled into an existing app in those countries. Additionally, this only includes mobile app data, and doesn't account for a potentially higher number of viewers who downloaded the app onto a smart TV and may not have installed the app on a mobile device.

The news was corroborated by data from marketing intelligence provider Sensor Tower, which reported that for the week beginning June 29 and ending July 5, downloads of Disney+ increased 64% versus the prior week. Sensor Tower also noted that the streaming service climbed to the No. 9 most downloaded app on Apple's (AAPL -1.51%) App Store on Friday, jumping 20 positions and landing it in the Top 10 for the first time in more than three months.

The company's decision to release Disney+ in November seems almost prescient in hindsight, as it has been one of the sole bright spots in an otherwise dark period for Disney. The House of Mouse has been hit particularly hard by the COVID-19 pandemic, which closed its theme parks and resorts, canceled sporting events shown on ESPN, docked its cruise ships, and postponed movie production.

Editor's Note: Because of incorrect information provided by Apptopia, an earlier version of this story contained incorrect numbers for global and U.S. downloads of the Disney+ app as well as the percentage gain for the U.S.