There are millions of customers coming to Nike through its workout apps, and it's contributing to digital sales growth.

While store closures around COVID-19 created a void for Nike (NKE -12.81%) last quarter, the future is in the digital sales channel. At the heart of Nike's digital marketplace is membership, which is revolving around an ecosystem of experiences including commerce apps like the Nike app and SNKRS, and activity apps such as Nike Running Club and Nike Training Club.

Nike previously required a subscription for premium workouts through Nike Training Club, but in March, it offered this content at no charge for 90 days to assist those staying at home during COVID-19. Now, Nike is making the premium content permanently free.

These activity apps are a crucial piece of the puzzle to Nike's growth strategy. In the fiscal fourth quarter that ended in May, digital revenue soared 79% on a constant-currency basis. Management is seeing the engagement in these apps translate to demand for sportswear. At the heart of this is a deepening relationship between the brand and the customer, which is a good sign for Nike's long-term growth prospects. 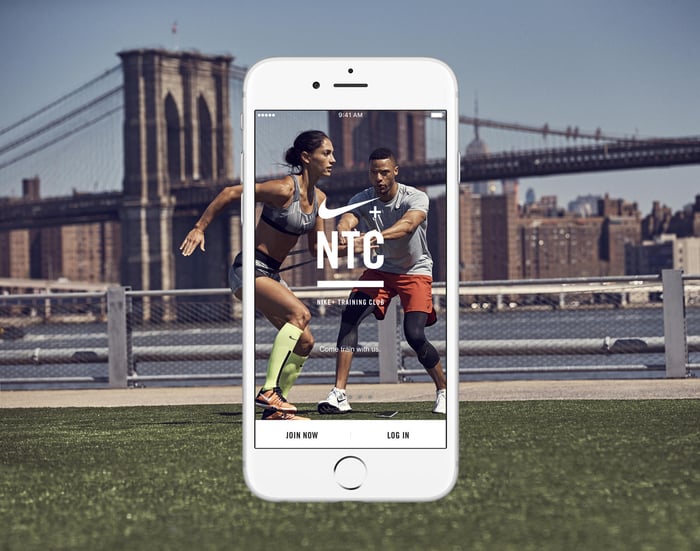 Nike wants people to be active

Nike Training Club is a complete guide to getting in shape. Once someone starts to use it, it becomes quite addicting. The app offers more than 185 workouts, including yoga, stretching, and strength exercises, along with tips and diet plans. Nike has a deep interest in encouraging people to live an active lifestyle for obvious reasons. A more active population translates to higher sales of training shoes and other apparel.

Nike just recently opened its first Nike Rise store concept in Guangzhou in Greater China. In the press release, the company made it clear that the ultimate goal is to encourage activity: "With the intersection of sport and digital always top of mind, this city-led retail destination transforms itself into a responsive, data-powered hub to inspire and enable Nike Members in Guangzhou to move."

Along with the Guangzhou store, Nike is launching a new feature for its app: Nike Experiences. It will connect members in the city to "weekly sport-minded activations designed to get them moving." This will involve in-store workshops and events hosted around Guangzhou by athletes and sports influencers.

Nike acquired 25 million new members in the fiscal fourth quarter, which represented an increase of over 100% year over year. Half of these new members came through the activity apps. Management reported that new and existing members were highly engaged with Nike Training Club (NTC) and Nike Running Club apps, in addition to SNKRS, the popular app for buying Nike footwear.

In China, during March and April, NTC monthly active users increased over 350% year to date. During the conference call, Donahoe said, "NTC weekly active users, which is a really important metric, because someone may only buy footwear and apparel a few times a year but engaging with us each week, maybe even each day, brings NIKE into their lives."

Over the last three months, the global NTC community logged 50 million workouts and over 908 million active minutes. This level of engagement can lead to increased purchases online. In the most recent quarter, the Nike commerce app saw triple-digit growth in monthly active buyers, and the SNKRS app crossed the $1 billion revenue mark for the first time.

Digital is still a minor portion of Nike's total revenue, so e-commerce growth is not going to be enough to overcome the decline in sales from recent store closings. Nike's digital business comprised nearly 30% of total revenue last quarter, but management sees a clear path to getting that to 50% over the long term.

Everyone is familiar with the swoosh logo, but there's a psychological reason behind its pull on the consumer. Nike is bringing in millions of customers through its activity apps, where studies have shown that physical exercise can be mood-enhancing.

Customers who log into Nike Training Club on a regular basis start to associate the Nike brand with a lasting positive experience, such as getting in shape. That's a tremendous competitive advantage for Nike, and the relationships it's building should fuel growth for many years.