Amazon and Domino's Pizza stocks should get a permanent tailwind from the COVID-19 pandemic.

If you invested $1,000 in e-commerce giant Amazon or pizza delivery leader Domino's Pizza 16 years ago, you'd now be sitting on $62,900 or $59,100, respectively, as of Friday. The Domino's total assumes you reinvested your modest dividends.

These are phenomenal gains given the broader market would have turned your $1,000 into about $4,080 over this period.

What's with the rather odd 16-year time period? Nope, no cherry-picking here. It's simply the longest whole-year period we can use because Domino's held its initial public offering, or IPO, just over 16 years ago, on July 13, 2004.

Let's review why Amazon and Domino's have been so successful, with an eye toward determining if the stocks still look attractive today. 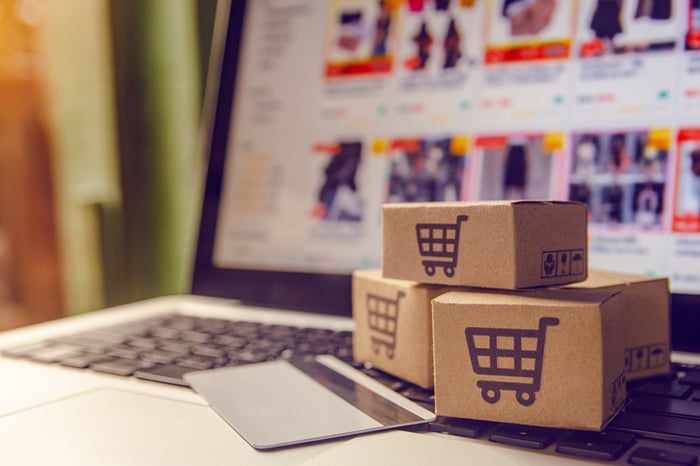 2 top coronavirus stocks that still have much growth potential

Consumers want their stuff to come to them -- and quickly

There are some key similarities between Amazon and Domino's, so it might not be too surprising that their stock charts over the last 16 years are remarkably similar, as you can see below.

Both companies are pioneers that capitalized on consumers' desire for convenience. Amazon, founded in 1994, wasn't the first company to offer online shopping. However, it pioneered the A-to-Z giant online store concept by quickly scaling up and expanding well beyond the first product it carried, books.

Amazon sells convenience as much as it sells products. Its immense product selection allows for one-stop shopping and its speedy delivery gets consumers their stuff fast. The company continues to improve its Prime loyalty program, and last year began upgrading its standard free delivery from two days to one day. 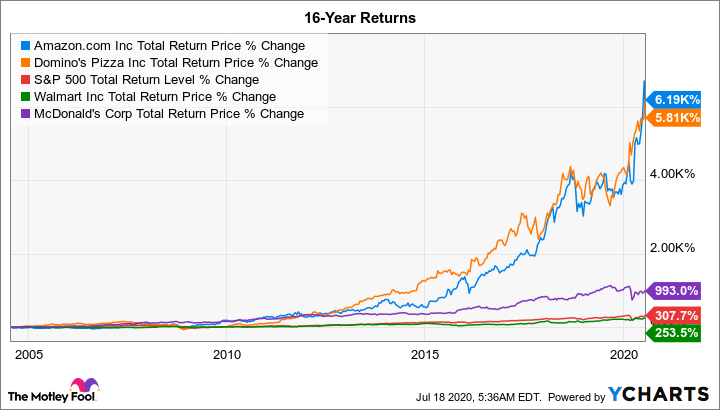 Data source: YCharts. Shares of Walmart, the largest retailer in the world, and McDonald's, the world's largest fast-food chain, are included for context.

Pizzerias dotted the American landscape decades before Domino's opened its first store in 1960. In fact, the first pizzeria in the United States, Lombardi's in New York City, predates Domino's by 55 years. However, Domino's pioneered pizza delivery on a large scale. The company went from one store in 1960 to 5,000 stores in 1989 to more than 17,000 stores today.

Another commonality relates to technology. Amazon's business was enabled by the invention and rapid consumer adoption of the internet. Domino's business hasn't been nearly as dependent on technology, but the company has embraced technological advances to make the consumer experience more convenient. For instance, in 2007, it launched online and mobile ordering, and in 2014, it rolled out voice ordering for its iPhone and Android apps.

Amazon and Domino's have much growth potential left

The following chart illustrates a key reason why Amazon has much more growth potential left. In the second quarter of 2020, e-commerce sales accounted for only 11.8% of all retail sales in the U.S. In other words, there is plenty of room for the online channel to take more market share from brick-and-mortar stores.

The scenario globally is similar, with online sales accounting for 14.1% of total worldwide retail sales in 2019. 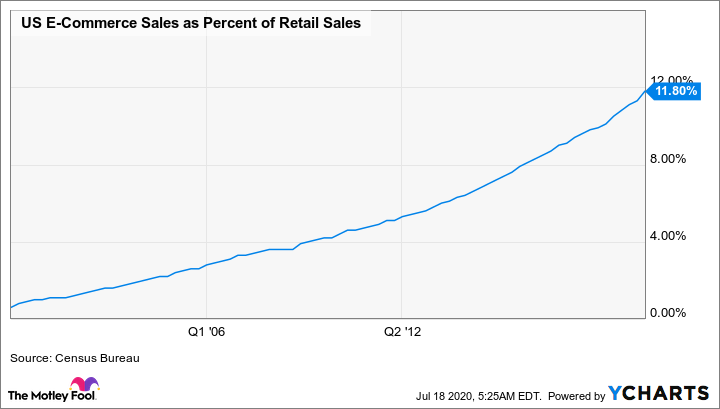 Amazon also has many other ways to grow. These include growing its cloud computing service, its smart-home business (which is centered on its artificial-intelligence-powered assistant Alexa), its online pharmacy PillPack, and its digital advertising business.

As for Domino's, CEO Richard Allison said on last week's fiscal second-quarter earnings call that management believes the company has "significant room for market share growth within the pizza category around the world." Moreover, the company also continues to add items to its menu, which provides further growth potential.

Both Amazon and Domino's have been getting a tailwind from the COVID-19 pandemic, which has accelerated the trends of shopping online and getting food delivered. This acceleration of trends that preceded the pandemic should prove lasting. Once people get used to a new level of convenience, most of them aren't likely to revert -- at least not entirely -- to their former habits.

Companies that can satisfy consumers' desire for convenience better than their competitors will likely always do well. So, if you have, say, $2,000 to invest -- or even less -- you might consider investing in shares of Amazon and Domino's Pizza.