Chipotle Mexican Grill (NYSE:CMG) stock has been relentless, surging more than 50% over the last year -- and it might just be getting started. Chipotle reports earnings July 22 after the markets close, and with the stock trading at more than 93 times earnings, it seems Wall Street has very high expectations. Long-term investors should look for insight and developments from four potential drivers of long-term growth, all of which could make the stock surprisingly undervalued. 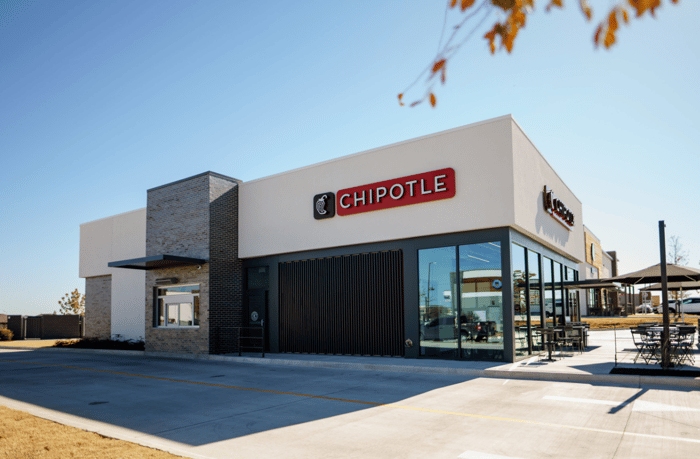 Chipotle made news last week when it announced plans to hire as many as 10,000 new employees to support the growth it's seeing from its mobile ordering business and the success of its "Chipotlane" drive-thrus.

In its previous quarter that ended March 31, the company saw 81% growth in digital sales -- that's a lot to keep up with! Chipotlanes will help the restaurant meet this rapidly growing demand, and they have the potential to bring in even more new customers who may not want to enter a restaurant right now.

The runway for this segment is truly massive. In the same press release that announced its plans to expand hiring, Chipotle celebrated its 100th Chipotlane. The company owns more than 2,600 restaurants; not all of them are suited for drive-thrus, but many are, and adding Chipotlanes to those outlets has the potential to drive same-store sales growth for a very long time.

Last week was a busy one for Chipotle, which also announced its plans to test cauliflower rice in 55 restaurants. Cauliflower rice might be a new concept to some, but it's growing rapidly with the anti-carb crowd and consumers in general, as it becomes a lower-carbohydrate replacement for traditional rice.

But what's important here isn't the cauliflower itself -- it's Chipotle's signal to stakeholders that it listens to their suggestions and is willing to try new things. Chris Brandt, Chipotle's chief marketing officer, mentioned that one-third of all new item requests from customers were calls for cauliflower. 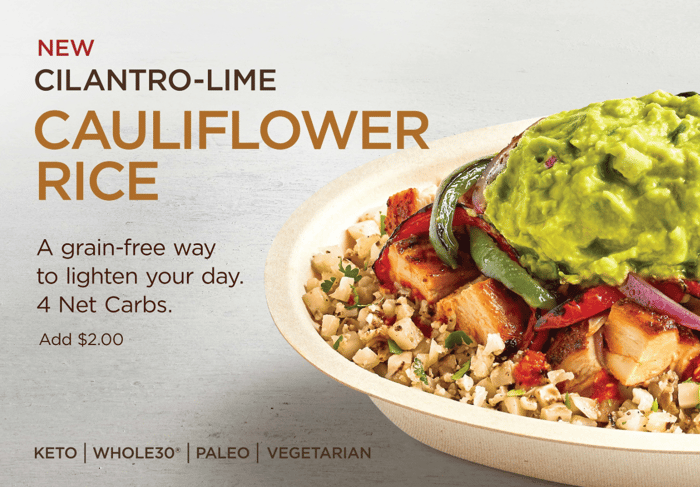 Chipotle's first version of queso didn't receive much fanfare, but today, the revised recipe has become a popular item that boosts the restaurant's average ticket size. Each time Chipotle adds a relevant offering to its menu, it has the potential to add new customers and get more cash from each customer -- for instance, cauliflower rice is $2 extra.

To be clear, the company has no public plans to enter the breakfast market, citing its strategic focus on digital and mobile orders. CEO Brian Niccol has repeatedly turned down the idea, with responses to breakfast inquiries ranging from "not at all" to "not now."  Chances here are slim right now, but breakfast is an obvious growth option. Once the company has its mobile ordering and its Chipotlanes operating under muscle memory, it could and should revisit a breakfast offering.

Of course, breakfast is a highly competitive space, but Chipotle is almost uniquely positioned to offer busy eaters a fast, delicious offering without sitting down or settling for lesser quality. Investors are unlikely to hear anything about breakfast this quarter, and while the prospect is a long shot, it could also be the company's most likely "home run."

For now, the other ingredient that could help Chipotle grow into its valuation is international expansion.

In an interview with the Barron's Streetwise podcast, Niccol said the company is "just getting started" internationally. Investors would certainly like to see the company execute on this front. Chipotle started expanding into Canada and the UK about a decade ago, and today it operates fewer than 40 restaurants outside the U.S. Continued international growth, primarily in Canada and Europe, has the potential to really accelerate the business, but it also poses some of the toughest challenges -- different regulatory environments, different taste preferences, and complicated supply chains for a brand that built its reputation on its high-quality local sources.

Niccol tipped his hand about his plans of further international expansion in that Barron's interview, adding that he sees a "huge runway to build new restaurants," and calling out opportunities in Canada and Europe. Investors should tune in to Wednesday's earnings call to see whether demand has held up internationally, and if mobile, pickup, and delivery is as feasible in other markets. Success in its existing international markets likely means more investment and more growth.

Chipotle doesn't need all these potential catalysts to harmonize to see continued success. 81% digital sales growth speaks to the demand for its products and its ability to meet that demand. A company doesn't hire 10,000 new employees during an economic downturn unless it's very confident about its own future.

If Chipotle fails to execute on the roll-out of drive-thrus, or its new items fall short of expectations, those stumbles could damage the stock, especially from its current all-time highs. But I'd argue that Chipotle should be confident in its ability to execute. Under Niccol's leadership, the entire chain has successfully reinvented its operations, converting and equipping its kitchens with an additional assembly line for mobile orders. That successful overhaul suggests that Niccol can help the company pull off similar big shifts.

Whether the stock is overvalued or not depends on the likelihood of the company's continued growth. For now, Chipotle has strong growth led by its mobile offerings; the new menu items, breakfast possibility, and international opportunity could just be the guacamole on top.