Please ensure Javascript is enabled for purposes of website accessibility
Log In Help Join The Motley Fool
Free Article Join Over 1 Million Premium Members And Get More In-Depth Stock Guidance and Research
By Howard Smith - Updated Jul 30, 2020 at 11:30AM

Restaurant operator Yum! Brands (YUM 0.38%) today reported that second-quarter earnings for the period ending June 30 showed a same-store sales decline of 15%. But the operator of KFC, Pizza Hut, and Taco Bell said that there has been "significant improvement" in business from its early-quarter lows.

CEO David Gibbs said its stores were flexible and innovative in adapting to a period that was significantly impacted by the coronavirus pandemic. He said, "Digital sales were a big driver of the dramatic improvement in sales from the initial impact of COVID-19, reaching an all-time high of $3.5 billion for the quarter, an increase of more than $1 billion over the prior year." 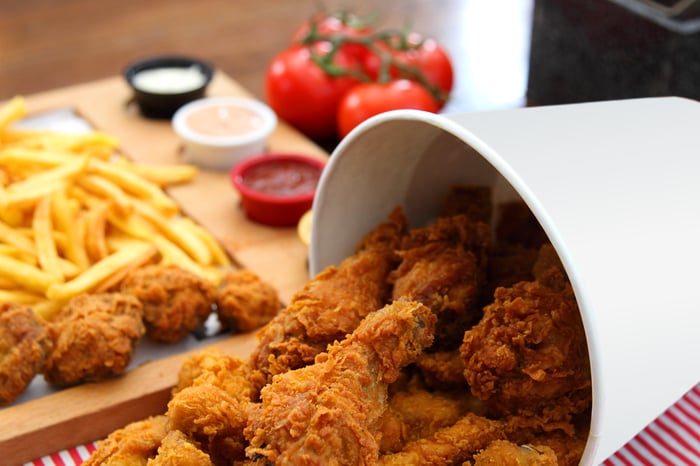 While the company said comps stabilized in June to be nearly flat, Gibbs said that improvement has continued into July and the company is currently seeing sales growth in all three major U.S. brands versus a year ago.

Quarterly sales in all U.S. restaurants were relatively strong. Its KFC division had 7% comps growth in the U.S., and Pizza Hut grew 5%, though Taco Bell recorded an 8% decline. In March, Yum! Brands completed the acquisition of The Habit Restaurants, parent of The Habit Burger Grill. Comps at this new division declined 18% in the second quarter.

The company said that approximately 95% of its global restaurants are now at least partly open. But many dining rooms remain closed, with only a fraction of dining areas open in the U.S.