Please ensure Javascript is enabled for purposes of website accessibility
Log In Help Join The Motley Fool
Free Article Join Over 1 Million Premium Members And Get More In-Depth Stock Guidance and Research
By Billy Duberstein - Aug 12, 2020 at 7:30AM

As the market has fallen in love with growth stocks, "old" companies transitioning to the new digital economy have seemingly been thrown out with the bathwater. Yet while the anointed winners of the digital and streaming age trade at hefty valuations, usually in the 10-20 times sales range or even more, many value stocks today trade at just single-digit multiples of earnings or free cash flow.

Of course, that kind of valuation discrepancy is warranted if said cheap stocks face perpetual declines; however, if said "cheap" stocks can adapt and transition to the new normal, patient investors could see massive gains.

In that respect, one interesting sector to watch is the cable TV segment, which has experienced headwinds due to cord-cutting from the traditional cable bundle. The market has thus left "traditional" or "old media" stocks for dead, including ViacomCBS (PARA -4.15%), Discovery (DISCK) (DISC.A) (DISC.B), and Lions Gate Entertainment (LGF-A 13.04%) (LGF-B 12.66%).

However, the following is also true:

Should they make a successful transition -- which is by no means assured -- each of these bargain-priced stocks could see material gains in the years ahead. 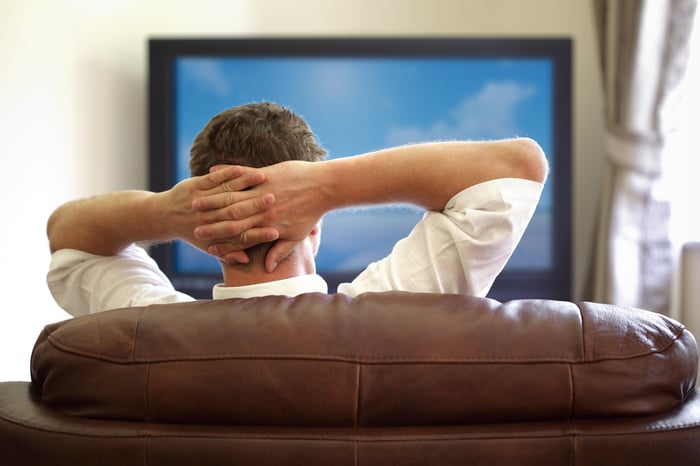 A ViacomCBS superservice is coming in 2021

ViacomCBS beat analyst expectations for both revenue and earnings per share on its recent earnings release, and it also provided investors with some bullish data points on the company's streaming progress. While advertising revenue was down strongly by 27%, affiliate revenue increased 2% as ViacomCBS benefited from retransmission contract increases, along with renewals with Verizon, YouTube TV, and DISH Network. That led to a revenue decline of only 12%, and an 8% increase in adjusted OIBDA (operating income before depreciation and amortization) as content spending was pushed out.

However, the reason to be bullish on ViacomCBS's future was its streaming results. Paying subscribers to the company's two paid subscription services, CBS All-Access and Showtime OTT, grew 74% to 16.2 million subscribers. Meanwhile, the company's free streaming service, PlutoTV, saw monthly active users grow 61% to 26.5 million. These streaming offerings still make up less than 10% of ViacomCBS's revenue, but they are gaining, with total streaming revenue up 25% versus a 12% dip in the total company's revenue.

The company also plans of rolling out a streaming "superservice" that combines CBS, Viacom, and Showtime shows all in one offering in 2021, including sports. In conjunction with the launch, ViacomCBS will announce new originals, and it will also put SpongeBob: Sponge on the Run, which was supposed to be released in theaters this year, on the new service after a brief premium video-on-demand window.

ViacomCBS also earned adjusted free cash flow of $892 million in the quarter, benefiting from a lack of production expenses. That annualizes to about $3.5 billion, compared with ViacomCBS's market cap of $16.3 billion today, or less than 5 times cash flow. While I wouldn't expect ViacomCBS's cash flow to be that good every quarter, it still shows the stock is extremely cheap given its financial resiliency through the pandemic.

Discovery is a free cash flow machine, with a direct-to-consumer offering to come

Another company seeing its free cash flow surge from lower programming spending is Discovery. Thanks to its 2018 acquisition of Scripps Networks Interactive, Discovery owns a large part of the non-scripted-content universe, which is the cheapest content to produce and leads to high profitability.

As was the case with ViacomCBS, Discovery saw advertising revenue fall 21.4%, but affiliate revenue increased 1.6%, as higher pricing offset lower subs. Discovery's content is some of the cheapest for distributors to buy, given its large audiences, and Discovery's team was able to raise affiliate fee prices while renewing contracts with its four largest distributors. That was justified by an increase in ratings market share within the TV bundle; according to management, Discovery grew more market share during primetime than any other company within its target demographics and improved its market share by 4% internationally.

While adjusted earnings per share fell 21% year over year, free cash flow increased 47% to $879 million, once again because of the timing of content spending. Annualizing that figure to $3.5 billion, Discovery's market capitalization of only $10.5 billion yields cash flow multiple of just 3.

No wonder Discovery announced it would be restarting its share repurchase program, which the company temporarily suspended in the first quarter. The company has $1.8 billion left on its repurchase authorization program, or about 17% of its current market capitalization.

Meanwhile, Discovery has been hard at work on its own over-the-top (OTT) direct-to-consumer offerings. On the conference call with analysts, CEO David Zaslav said the company was putting the "finishing touches" on the Discovery D2C service, the details of which will be shared "in the very near future" before a U.S. launch.

If Discovery's new OTT offerings can expand its addressable market beyond the declining TV bundle, shareholders could be in for a treat with the stock at such bargain-basement levels.

Lions Gate Entertainment also recently reported its second-quarter earnings. While the company didn't show the profitability of the prior two companies, Lions Gate did beat revenue and adjusted earnings expectations, even though movie theaters were shut down during the quarter, which led to 29.4% revenue declines from the motion picture segment.

The extra revenue and profit relative to expectations came from the licensing of Mad Men for syndication, as well as better-than-expected growth for the Starz premium channel, which is available both through cable distributors and OTT.

The Mad Men deal shows that Lions Gate's library of produced premium content can bring in "long-tail" value even when a show initially appears outside the company's TV media platforms. Meanwhile, adjusting for the effect of packaging changes over the past year for multichannel video-programming distributors, the Starz premium networks showed good subscriber growth. Total domestic and international Starz subs across linear and OTT increased from 20.5 million in the year-ago quarter to 25 million at the end of June.

Lions Gate is often an afterthought in the media world, and admittedly, the company doesn't have the heft of the some of the larger media companies to put out a mass-market streaming service. However, management's strategy to keep producing high-quality film and TV shows, even for other channels and services, as well as tailoring Starz as a premium service for female, African American, and Latino audiences, seems to be paying off. At just $1.65 billion market cap and a 0.5 price-to-sales ratio, Lions Gate stock could still do well from these low levels. In addition, given its attractive content library and small market cap, it could make an easily digestible acquisition target for a larger media company.