Please ensure Javascript is enabled for purposes of website accessibility
Log In Help Join The Motley Fool
Free Article Join Over 1 Million Premium Members And Get More In-Depth Stock Guidance and Research
By Mike Raye – Aug 25, 2020 at 8:34AM

Some cinema chains say they'll be operating at full capacity by Thanksgiving, but do they really have a plan?

If you're a movie fan, you know that sequels rarely live up to the original, much less surpass it. Cinema chains across North America have been hit hard by the COVID-19 pandemic, and lately, they've been working on sequels of their own. The big three U.S. chains — AMC, Regal, and Cinemark — say they have a plan for a safe return to the movies, with social distancing and sanitization protocols. But the challenges they face suggest that their plan's headed toward an ending more "cliffhanger" than "happy."

Cinemark Holdings, Inc. (CNK -3.25%) CEO Mark Zoradi appears in a website video with a statement equal parts assertive and aspirational. "There's nothing quite as powerful as great cinematic storytelling on the big screen," he says. That is the one thing cinema chains across America are banking on as they announce plans to reemerge in the age of Netflix.

Cinemark USA is the third-largest chain in the U.S. based on the number of theatres, with 4,630 as of February 2020, after industry leader AMC Entertainment Holdings, Inc. (AMC -2.40%) with 8,043 theatres, and UK-based Regal Entertainment Group (a private company with 7,178 theatres).

Based on Q2 earnings reports, the pandemic devastated the industry. Movie houses were shuttered for the entirety of the second quarter, which ended June 30. Cinemark reported a net revenue loss of $230 million. 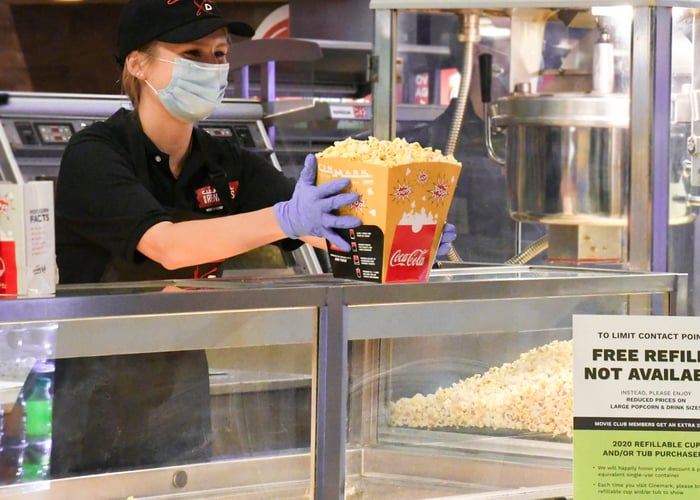 Would you like butter or hand sanitizer on your popcorn? Image Source: Cinemark.

AMC CEO Adam Aron called the COVID-19 pandemic a "once-in-a-century event" and 2020 a "brutal year." He said Q2 was "the most challenging quarter in the 100-year history" of the company, reporting a net revenue loss of nearly $561 million — a staggering drop of 98.7% from the previous year.

Cinemark plans a phased reopening of its theatres on Friday, Aug. 14 through Friday, Aug. 28, with "enhanced cleaning and sanitizing protocols" and social distancing measures. It opened 59 theatres Aug. 14, with 42 scheduled for Aug. 25 and another 44 on Aug. 28. 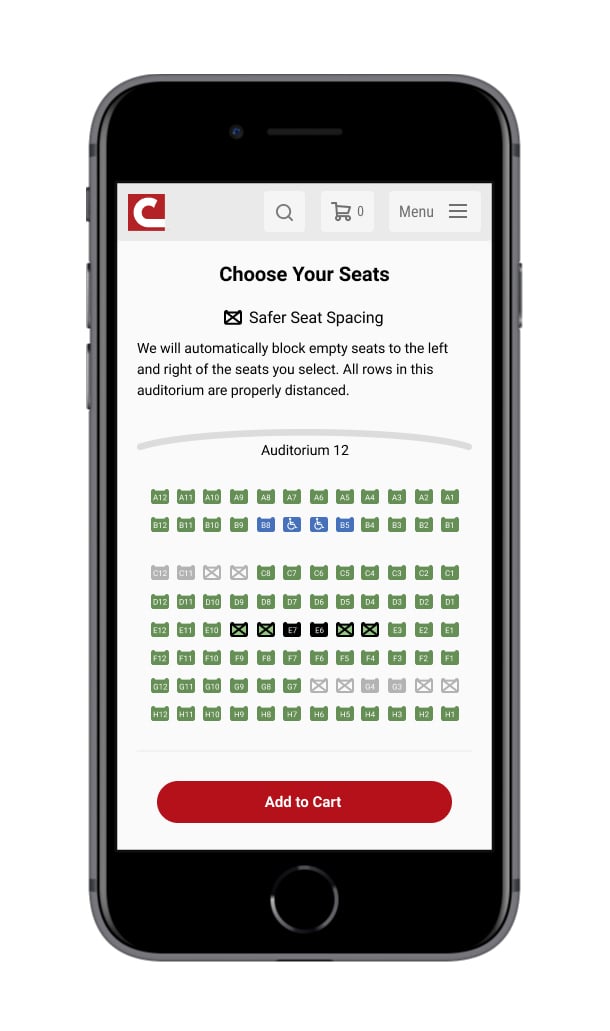 On the social distancing front, Cinemark rolled out a new algorithm in its online ticketing app that automatically blocks seats on either side of a moviegoer's party, designed to ensure people keep their distance. It is also requiring guests to wear a face mask at all times, except when munching discounted and limited movie snacks while seated. Each Cinemark theatre will have a "chief clean and safety monitor" to ensure cleaning protocols and pre-shift staff wellness checks are conducted.

AMC partnered with The Clorox Company (CLX -0.31%) to establish cleaning and sanitization protocols and said it plans to open "two-thirds or more" of its 661 U.S. theatres over the course of August 2020.

As of Aug. 12, Angelika hadn't announced a reopening date for its theatres but said it was encouraged by the implementation of safety protocols and customer demand in Australia and New Zealand theatres owned by its parent company Reading International. Reading executives hinted a U.S. reopening set to capitalize on the release of the Christopher Nolan-directed Warner Bros. (NYSE: TWX) film Tenet on Sept. 3.

Once upon a time in Hollywood

Labor Day weekend (Sept. 5-7) looms ahead, and no doubt cinema chains are hoping for a payday. According to the Hollywood Reporter, the top 10 movies brought in $82.3 million in revenue over Labor Day weekend 2019, which it called "sluggish." If 2019 was sluggish, 2020 will likely be sluggish-er.

AMC said it plans to resume operations in 100 theatres Aug. 20, and "approximately 300 additional AMC locations around the country are expected to open during the following two weeks" — just in time for the latest Disney blockbuster, The New Mutants, on August 28.

To mark its founding in 1920 -- when the world was emerging from the depths of the 1918 flu pandemic -- and lure more patrons Aug. 20, AMC will charge the period price of 15 cents per ticket.  Cinemark is offering $5 adult and $3 child tickets for previous blockbuster films like Jurassic Park and Raiders of the Lost Ark in its "Comeback Classics" collection — designed to put patrons in seats before the 2020 releases open. If you want to ramp up on the social distancing, Cinemark offers a "private event" screening for 25 people, including a large popcorn and a large drink apiece, for $350. Considering that pre-pandemic cost of 25 sets of movie snacks alone would at least equal that, it's kind of a deal. 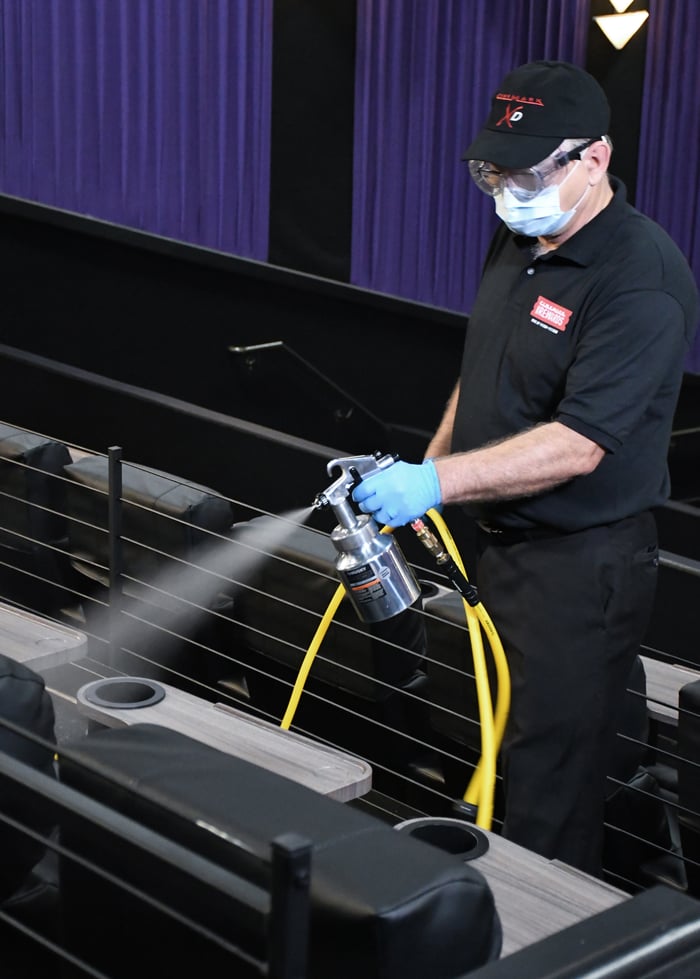 All these plans by the cinema companies are all well and good, but so what? What if people stay at home? Returning to the movies is going to be a leap of faith, just like participating in other activities that were redesigned to reassemble us, from restaurants to theme parks to college campuses.

The only way to recoup some of the lost revenue this year is to sell movie tickets and concessions and spin the turnstiles. But while Cinemark and AMC and others are building (or rebuilding) that field of dreams, but will they come?

A survey in May by Variety magazine showed that 70% of respondents would rather stay home than venture out to the local megaplex if there was an option to stream new releases at home. Looking post-pandemic, 37% said they would go to the cinema less often than before, and 10% said they are considering never going back.

In late June, The Hollywood Reporter conducted a poll of 2,200 readers and found that 65% of them were "very unlikely" to return right away, and 10% gave the thumbs down to returning in 2020 at all. The poll showed that about half of the respondents would return in early 2021.

A study by analytics company Morning Consult showed that, as of Aug. 17, only 17% of U.S. adults "feel comfortable" going to the cinema. That number has declined since the end of April, the study shows.

As far as investing goes, sure, cinema stocks are at near-record lows right now. But have you heard about trying to catch a falling knife? It's not the plot of a Hollywood slasher film. It's a cautionary tale for investors. Add Cinemark and AMC to your portfolio if you wish. Just don't expect any red carpet treatment for a very long time. And try to catch that knife by the handle.

What Does Wall Street See for Cinemark Holdings's Q2?

Does Cinemark Holdings Measure Up?
356%