AbbVie, Cardinal Health, and Walgreens Boots Alliance are all showing growth, and each boasts a yield of at least 3.8%.

Companies that pay large dividends don't usually have high growth. Using a large portion of free cash flow to issue payouts to shareholders can leave management with not much left over for innovation and investment in the business.

Interest rates and bond yields are currently low and likely to stay that way for awhile. That leaves limited options for income investors who are also seeking growth. That said, AbbVie (ABBV -0.14%), Cardinal Health (CAH 0.24%), and Walgreens Boots Alliance (WBA 0.66%) are three healthcare stocks with secure dividends that soundly beat the S&P 500's average of 2% -- and have increased their revenue by more than 25% over the past five years. 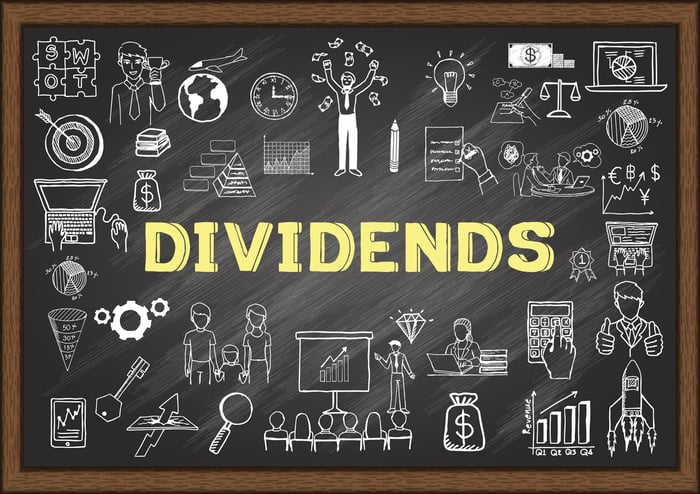 Pharmaceutical company AbbVie is a Dividend Aristocrat, which means it has consistently raised its dividend for 25 years. Note that AbbVie was spun off from Abbott Laboratories in 2013, so it does get credit for Abbott's consistency. Still, AbbVie itself has raised its dividend every year since its spinoff. This year, it set the quarterly payout at $1.18 a share, a 10.3% increase, giving it a current yield of 5%. The payout ratio on that yield is relatively high at 47.5%, but still well below what management needs to keep it up.

The company has also been steadily growing revenue for the past five years, and despite some slowdowns due to the coronavirus pandemic, it's on pace for another record year. Its second-quarter report showed earnings for the first six months of the year reaching $19 billion, a rise of 18.4% year over year. Operating income for the first six months, however, was a reported $2.2 billion, down 29% year over year.The company's share price is up more than 6% year to date.

Investor concern about AbbVie largely centers on the year 2023, when its lead drug, Humira, which treats a number of inflammatory conditions, loses patent protection. Fortunately, the company's purchase of Allergan, which closed this past May, is going to strengthen its pipeline. Humira is still a huge seller, bringing in $9.5 billion in the first six months, but that's only 50% of the company's revenue, down from 65.5% in the same six-month period three years ago. 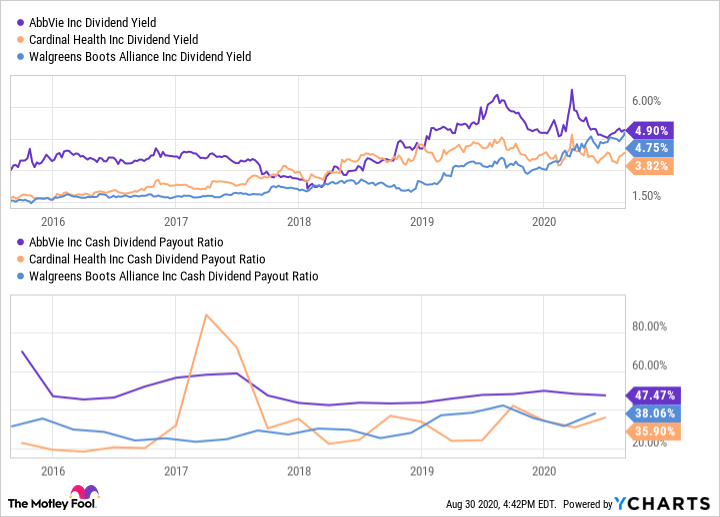 Cardinal Health, a major drug distribution company, is another Dividend Aristocrat. It boasts 35 consecutive years of dividend raises, including a 1% bump this year to $0.4859 per share. The company's share price is about flat year to date, and the yield on its dividend is 3.85%. The dividend is certainly safe, based on the company's payout ratio of 36%.

While the company's revenues were down for the fourth quarter, they were up for the year at $152.9 billion, an increase of 5% over fiscal 2019 and the sixth consecutive year of revenue growth. That's a great sign, considering how difficult 2020 has been for drug distributors. The company did lose $3.9 billion in net income for the year, but $1.4 billion of that came from paying down debt.

Revenue may be slow at Cardinal Health until the coronavirus pandemic is contained and elective medical procedures increase. In its fourth-quarter earnings call, the company said that's unlikely until late in 2021, but patient income investors won't mind.

Walgreens Boots Alliance is poised for a comeback

Walgreens Boots Alliance's stock is way down for the year, more than 34%. Much of the company's business is retail, and the pandemic has kept earnings flat and pharmacy margins mediocre.

Despite that, the company is on pace for its sixth consecutive year of revenue growth since Walgreens became Walgreens Boots Alliance in 2014. Through the first nine months of fiscal 2020, ending May 31, the company reported sales of $104.7 billion, an increase of 1.8% from the same period a year ago. Operating income was $662 million, down 83.9% year over year, with the company citing COVID-19 pressures as the culprit behind about half of the lower margins. (A change in product offerings and supply-chain costs were among the reasons cited for the rest.)

Walgreens Boots Alliance is also a Dividend Aristocrat, of sorts. Counting the history of Walgreens before it merged with Boots, the company has 45 consecutive years of dividend increases. This year, it upped the payout by 3.2% to $0.4675 cents per share, leaving it with a yield of 4.75%. The company's payout ratio is 35%, so the dividend isn't likely to go down soon. 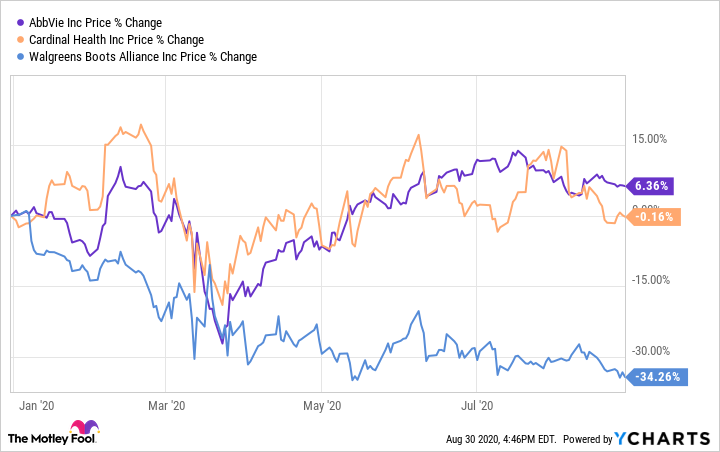 It's hard to go wrong with any of these stocks, particularly if you're an income investor thinking long-term. However, of the three, I think Walgreens' share price has the most likely upside as business slowly improves following the coronavirus pandemic. In the short term, AbbVie is probably the least likely to fall in share price, while Cardinal, like Walgreens Boots Alliance, is a bargain at its current price.