Make sure you're asking the right questions about your portfolio.

The stock market's massive summer rally hit a big speed bump on Thursday, as major benchmarks suffered big declines that had some investors on the verge of panic. The Dow Jones Industrial Average (^DJI -0.43%) had the smallest slump on a percentage basis, but an 800-plus-point drop still had a psychological impact on market participants. Meanwhile, the Nasdaq Composite (^IXIC 0.00%) fell almost 600 points and was within a hair's breadth of technically seeing a one-day 5% correction. The S&P 500 (^GSPC -0.21%) split the difference.

Plenty of people want answers to why the stock market tanked on Thursday. But trying to pin down exactly what causes short-term movements in stocks is doomed to failure.

You have to accept that downturns like today's will happen from time to time. Rather than fighting that, you're better off simply focusing on your overall investing strategy and sticking with it for the long term. 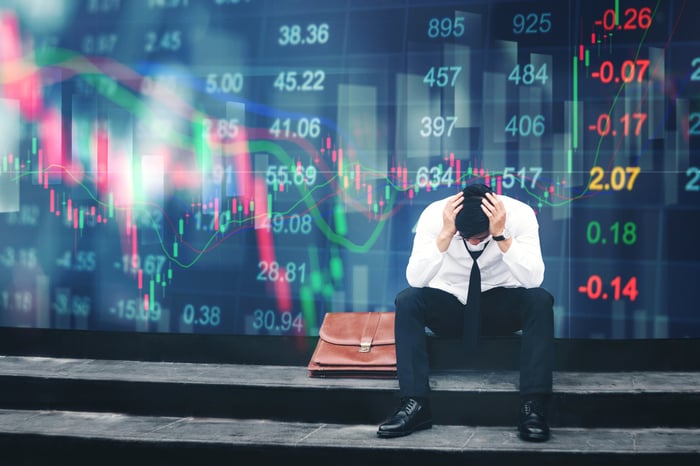 Is there a reason?

Some market commentators will inevitably look at the day's news and try to draw connections between it and the stock market's decline. For instance, the latest figures on claims for unemployment benefits came out on Thursday morning. That data showed that 881,000 people filed first-time jobless claims. Early in the day, economists seemed pleased with that number, as it was somewhat less than they'd expected overall. Yet after the market opened and started to fall, some pointed to that figure as a sign that the economy isn't getting better as quickly as some want.

Others note that September is traditionally a poor month for the stock market. It's true that when you look at returns from past years, the average monthly return for September is weaker than any other month of the year. Yet that doesn't explain why the drop came today -- and why it came after an extremely strong showing for stocks in the first two trading sessions of the month.

Be glad about the pullback

It seems counterintuitive to many investors, but most people should actually be happy to see the market pull back from its recent highs. The majority of those who invest in the stock market have longer to go before they'll pull out their money for their financial needs, whether it's retirement or something more immediate. Those people are largely still adding money to their portfolios, looking to buy stocks to grow their wealth more quickly. If you expect to be a net buyer of stocks over the rest of your lifetime, then lower stock prices help you as a long-term investor.

Moreover, many investors have kept high levels of cash on the sidelines in hopes of getting an opportunity to invest more cheaply. After today's drop, those investors might have the opening they've been waiting for.

Individual stock investors could have even better chances. Popular stocks like pet e-commerce player Chewy (CHWY 2.00%) and videoconferencing leader Zoom Video Communications (ZM 1.27%) are down double-digit percentages from their recent highs. If they've been on your watchlist, then it's a good time to take a closer look.

Just as it was impossible to guess that Sept. 3 would be the day a big drop in the markets would come, you also can't expect to know whether today's slump is the beginning of a more serious intermediate-term pullback or just a one-day event. If you can get past the temptation to try to time the stock market and instead simply stick to a proven long-term strategy, it'll serve you well in the end.