The world's largest cruise line isn't shipshape right now, but the prospects get better if you're patient.

You can't hop on a Carnival (CCL 6.17%) (CUK 6.22%) cruise these days, but you can hop on Carnival stock. Shares of the world's largest cruise line operator reflect the uncertainty that the industry has been experiencing since the pandemic nixed sailings. The stock has fallen 65% this year through Thursday's close.

It's not all bad news for Carnival, though. The first of its ships to resume passenger voyages set sail in Italy this weekend. The Costa cruise is limited to locals and will only call on Italian ports, but it's the first baby step in a long journey to recovery. Can Carnival stock overcome the red ink, suspended dividend, and uncertain future? Let's see if Carnival has what it takes to be a millionaire-maker stock. 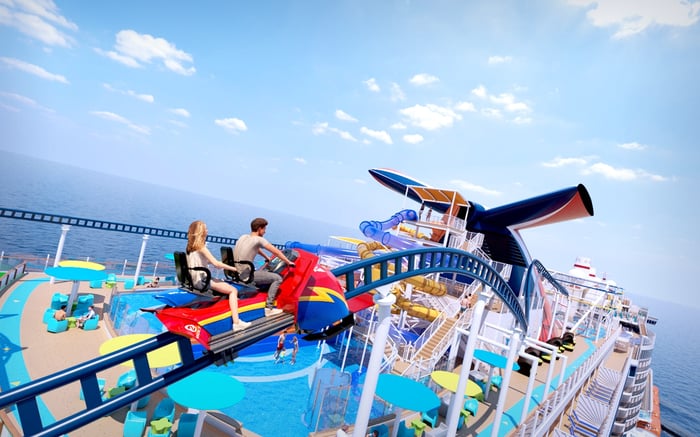 The travel industry has been one of the hardest hit market segments since the COVID-19 crisis emerged, and cruise lines in particular have been smacked particularly hard by Wall Street's bearish waves. Shares of Carnival and smaller rivals Norwegian Cruise Line Holdings (NCLH 5.99%) and Royal Caribbean Group (RCL 3.19%) are among the biggest sinkers of 2020.

The near-term prognosis isn't pretty for Carnival. Most of its sailings keep getting pushed out deeper into 2020. We're looking early November as a restart date for many of Carnival's cruises, and a few select ships aren't hitting the water again until early next year. Analysts keep widening their projected losses for Carnival, Norwegian Cruise Line, and Royal Caribbean. Wall Street doesn't see Carnival, Norwegian Cruise Line, or Royal Caribbean returning to profitability until 2022.

Even if we look out to 2023, analysts see Carnival earning less than a third of what it did in 2019. It will take a long time for Carnival stock to hit new highs. It has unloaded some of its ships, so when it returns it will be a smaller company. Customer demand is also going to take some time to win back after virus-related mishaps across the industry earlier this year. Carnival won't return to peak 2019 revenue form until at least 2024 if not later, according to analysts.

Carnival's near-term solvency is assured. It has raised over $10 billion in financing. It's cutting billions in operating costs and capital expenditures. Liquidity right now isn't an issue, but keep in mind that all of this debt raising and stock printing does eat into profitability on a per-share basis. There's no free lunch -- even at the midnight buffet. A Deutsche Bank analyst looked at the $850 million in incremental interest expense and the larger share count over the summer, concluding that the $4.40 a share it earned last year would translate to only $2.88 a share under 2023's projected debt and dilution.

All of these things will weigh on Carnival's upside, but that doesn't mean things have to end badly. Carnival's unloading mostly aging ships in its fleet. It's also merely delaying and not canceling orders for some of its newer high-tech vessels. The pandemic is scary now, and the global recession will eat into how much people will pay for cruises. Viral outbreaks and economic swoons are painful, but thankfully they're only temporary.

Carnival should bounce back eventually if you're a patient investor. Its fleet will be more efficient. Its cost controls will be all the better for the belt tightening it's going through now. There may even be a shakeout that eliminates some of the weaker players in the market, giving Carnival more pricing power and a larger share of the market. The dividend will come back when earnings return in a sustainable manner.

Right now, Carnival is not a millionaire-maker. It's hard to recommend Carnival when so many things have gone wrong in recent months and so many questions remain to be answered. However, the prospects are brighter looking out three to five years in the future when the marketplace will be completely different. You may not want to board Carnival stock right now, but keep the brochure close so you can revisit it once the water is more inviting.