Shares of Exact Sciences (NASDAQ:EXAS) were skyrocketing 26.3% higher as of 3:20 p.m. EDT on Thursday. The big jump came after the company's CEO, Kevin Conroy, presented at the Cowen Liquid Biopsy Summit.

With Exact Sciences stock moving so much higher, you'd expect that Conroy's presentation was a doozy. Cowen analyst Doug Schenkel thought so. He said Exact Sciences "took a big step today to declare its intent to be a major liquid biopsy company." Liquid biopsies are blood tests that determine if a person has cancer by detecting fragments of DNA that have broken off from tumor cells. 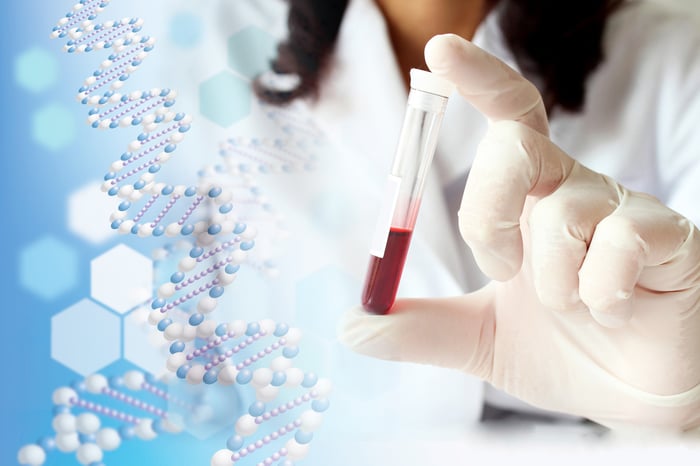 Conroy discussed preliminary data for Exact Sciences' multicancer liquid biopsy screening test at the Cowen meeting. The test achieved 86% overall sensitivity (the ability to correctly identify positive cases of cancer) and 95% specificity (the ability to correctly identify negative cases with no cancer) in detecting various types of cancer, with the best results in detecting ovarian and pancreatic cancer.

Exact Sciences hasn't received FDA clearance yet to market its liquid biopsy test. The company should have a huge growth opportunity if the test secures a green light, though.

While liquid biopsy could eventually provide a big boost for Exact Sciences, the company's fortunes currently rely primarily on Cologuard and its Oncotype DX tests that predict the likelihood of cancer recurrence. Today's move put the healthcare stock in positive territory year to date. However, Exact Sciences will need improving third-quarter results in a little over a month to keep its momentum going.