Can the specialized online marketplace coexist with Amazon?

The company's online marketplace connects sellers (individuals and small businesses) with buyers. Etsy specializes in handcrafted and vintage items, as well as craft supplies. It has received some extra attention this year due to the COVID-19 pandemic, with countless crafters responding to the massive demand for masks by selling handmade ones through platforms like Etsy's.

The company has been a good story for some time, but investors who are considering opening a position should also ask themselves if Etsy can continue drawing sellers and competing with rival marketplaces, particularly behemoth Amazon (NASDAQ: AMZN). 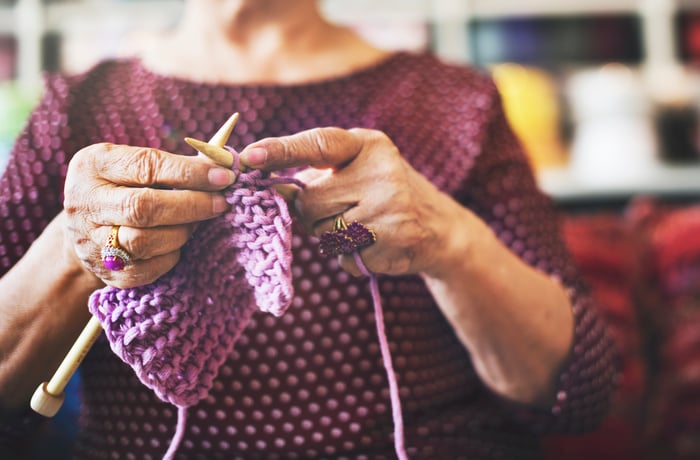 Etsy's offerings are often unique. According to a 2019 survey it conducted, 88% of buyers on the site said it featured things they wouldn't be able to find elsewhere. Like its peers, it charges sellers various fees for listing and completing transactions, and for processing payments.

The key for Etsy, then, is to attract sellers to its platform to hawk those distinctive and often personalized offerings. Last year, it drew 2.7 million sellers and 46.4 million buyers, generating gross merchandise sales of $5 billion. This compares to 2.1 million sellers and 39.4 million buyers in 2018, with gross sales of $3.9 billion. So the company has done a nice job on that front.

However, Etsy needs to continue cultivating relationships with sellers and constantly get them to put out new items that are hard to find elsewhere.

Many people have turned to Etsy in their rush to buy masks to help slow the spread of COVID-19. In the second quarter, masks accounted for 14% of sales on the site. This certainly helped boost quarterly revenue, which more than doubled year over year from $181.1 million to $428.7 million, while its net income increased more than fivefold to $96.4 million. Gross sales went from $1.1 billion to $2.7 billion.

Those strong results came from more than just mask sales, though. That's good news since retailers and other companies also sell masks, so there's lots of competition there.

Excluding masks, the marketplace's sales grew year over year by 93% in the quarter, with home furnishings, jewelry, and craft supplies particularly strong performers. This shows that Etsy's improving performance is more than just from a temporary phenomenon. Revenue growth has been strong for several years, including increasing 36% in 2019 to $818.4 million.

Of course, the economic situation has changed. Founded in 2005, Etsy managed through last decade's recession, but it is unclear how that slowdown affected the company's results since publicly available information only goes back to 2012. The company went public in 2015. Currently, management says it is adjusting to the current economic climate by focusing its marketing message on the fact that Etsy is "always open" and meeting buyers' everyday needs. It seems likely that Etsy sellers can push lower-priced goods that will attract buyers in a tough economy.

Management is also taking steps to help the company keep drawing sellers, such as using artificial intelligence to understand buyers better and allowing sellers to highlight their offerings.

Can Etsy fend off Amazon?

While Etsy is in a good position, the key question is how effectively can it compete with Amazon. After all, when the behemoth online retailer decides to enter an arena, it can have a massive impact. So, when it started Amazon Handmade in 2015, a competing service, that naturally raised the question of how that would impact Etsy's business.

So far, it has continued to do well. One big reason is its lower fees. Etsy charges sellers a 5% transaction fee after the sale, a $0.20 listing fee, and a 3% to 4.5% payment processing fee. Meanwhile, Amazon Handmade charges sellers a 15% referral fee upon the transaction's completion. Etsy also has a decade head start on Amazon and has built a loyal base of sellers and buyers.

However, as we've seen in other industries, Amazon could become the price leader, which may pressure Etsy's results. While things are going well right now, it is always important to think about what Amazon will do next.

What the Smartest Investors Know About Etsy Stock
413%