In a statement, the Fed said it would ban share repurchases in Q4 and cap dividends based on a formula tied to recent income.

The Federal Reserve said it would continue to restrict capital distributions for large banks in the fourth quarter, banning share repurchases and capping dividends to "a formula based on recent income."

The Fed formally began those restrictions on banks -- with more than $100 billion in assets -- in the third quarter. That included limiting dividends to an amount not greater than the average net income over the preceding four quarters.

The Fed also said it would not allow banks to pay out a dividend greater than what they paid in the second quarter. While those could be the same restrictions for the fourth quarter, the Fed did not specify the dividend formula in its initial statement. 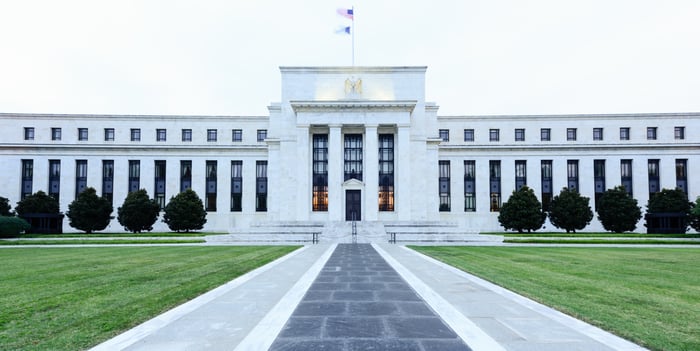 The restrictions in the third quarter came after the Fed put 33 banks through its annual stress testing exercise.

During this exam, the Fed puts banks through a series of hypothetical and typically adverse scenarios to see how banks' balance sheets would hold up under varying degrees of a recession.

The Fed noted in its press release that all banks came out on the other side of the stress testing with ample capital to continue to lend in tough economic conditions. But it chose to keep the restrictions in place "in light of economic uncertainty."

If coronavirus cases continue to rise in the fall and winter, and some type of stay-at-home order is put in place again, banks could find themselves facing more loan losses than they expect right now, which could strain capital.

Later this year, the Fed for the first time plans to put banks through a second round of stress testing to test their balance sheets through more up-to-date coronavirus economic recovery scenarios.

Although many believed the Fed could extend the restrictions, it was not a certainty, especially after JPMorgan Chase CEO Jamie Dimon told analysts in July that he would not rule out share repurchases in the fourth quarter.

The restrictions make it tougher for banks to pay out their dividends because they can't dip into retained earnings if they have a bad quarter.