These shares have been hit hard this year.

VF's (VFC -0.99%) share price is down about 30% since the start of the year. While the stock has recovered nicely over the last six months, that is small comfort for shareholders who are in the red. After all, no one feels good about losses, even if they have narrowed.

Of course, COVID-19 has done a number on VF's results, forcing it to close its retail stores, and government mandated stay-at-home orders diminished demand for its products.

However, investing in stocks is about the future, and that means focusing on VF's prospects. So, that's what I've set out to do. 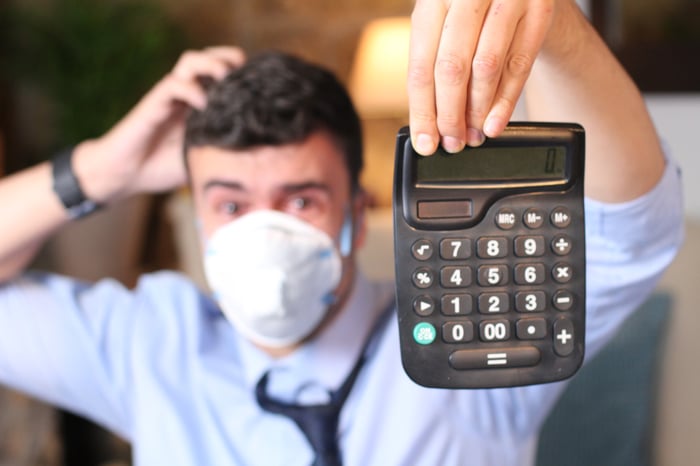 Management has made some prudent moves to part ways with portions of its business over the past couple of years. This includes spinning off its jeans business, which contained the Wrangler and Lee brands. While recognizable products, this is a competitive arena, including the formidable Levi Strauss & Co. (LEVI 1.33%) and private label brands. Earlier this year, VF also decided to explore divesting its occupational workwear division, which would leave it primarily with its core outdoor and activewear businesses.

Fortunately, the transactions allow VF to focus on the more profitable parts of its business. These groups include strong brands like The North Face, Timberland, Vans, and JanSport.

VF's fiscal first quarter 2021 (ended June 30) revenue under U.S. generally accepted accounting principles (GAAP) was down by 48% to $1.1 billion. Turning to the bottom line, its adjusted loss per share was $0.57 a share compared to income of $0.22 a year earlier.

While these are nothing to write home about, they did beat the analyst consensus estimate. Management expects second-quarter revenue to fall by less than 25%.

It is useful to see how VF performed during fiscal 2020, which was before the virus became a worldwide pandemic. Last year, its revenue was up by 4% after removing the effects of foreign currency translations, and acquisitions and divestitures. VF's adjusted earnings per share rose by 7%. While not fast growth, these rates are certainly more comforting.

Throughout the pandemic, many companies have cut their dividends. However, VF has continued to pay its $0.48 quarterly dividend, and the company specifically mentioned its plan to carry on.

Although management has withdrawn this year's guidance due to the uncertainty created by the pandemic, its commitment to paying dividends indicates management's confidence in the future. You also receive a 2.7% dividend yield while waiting for its results and share price to advance.

VF will need to improve its cash flow to sustain the payments down the road, though. Last year, its operating cash flow was about $875 million and capital expenditures were $288 million. This left $587 million in free cash flow, which was insufficient to cover the $749 million of dividends. VF helped fill its cash till after spinning off its jeans business, receiving $906 million. For 2020, management expects to generate free cash flow of more than $600 million, which still won't cover the yearly dividends.

The company has pushed its business into outdoor and activewear, two promising areas. It has also shown a willingness to stick with its dividend during trying days. However, VF has to get through this difficult period and show it can execute its plan effectively so that it will improve profitability and growth. I would suggest holding off for now unless you are willing to bear the company's higher risk of executing its strategy.