Apple and Netflix have made long-term investors rich, but these huge winners had challenges along the way.

The dream goes like this: You get a tip on a company that's about to explode, and you invest some money. Suddenly, it rockets upward, and it's like a winning lottery ticket. You're a millionaire!

The reality goes like this: You can consistently invest relatively small amounts of money in great companies and watch it grow into a huge number, maybe even millions; but it's a get-rich-slow scheme that takes years of patience and discipline.

Today, it's easy to see Apple (AAPL 1.14%) and Nextflix (NFLX 4.80%) as innovative giants that made investors rich, but there were times when shareholders hit the exits. The ones who stuck around lived the dream. Let's see what we can learn from these two companies. 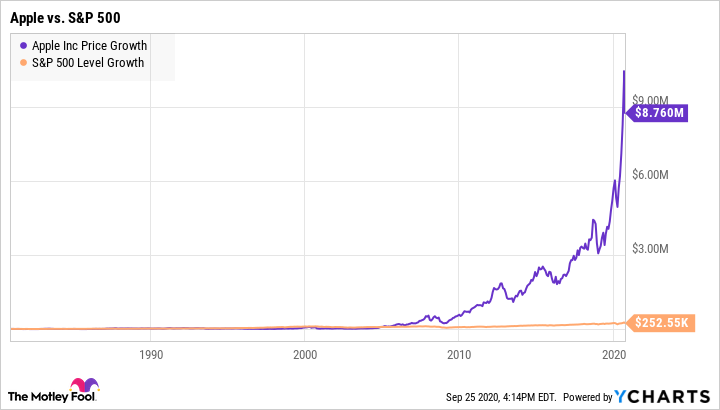 What's hard to see in that chart are some of the big drops. In seven different years, Apple lost at least a third of its value. It was down almost 10% between 1980's IPO and the end of 1997. That was an important year. Steve Jobs resumed his role as CEO in September, and the struggling company began to rise.

In the following two years, Apple stock surged 683% as Mac sales helped turn a $1 billion net loss into a $601 million profit. Investors partied in 1999, but in 2000, the tech bubble burst and Apple stock fell 71%, its worst year on record. That bust happened just as Apple was on the verge of greatness.

In 2002, it introduced the iPod, and in 2007 it launched the iPhone. By 2009, the iPhone and iPod accounted for about half of the company's total revenue. In just a decade, Apple had transformed itself.

So, what did the stock do in 2008, when annual revenue grew 35% and net profit rose 38%? It tumbled 57%, the second-worst year in the company's history. The Great Recession had gripped the world economy; but in 2009, Apple roared back, rising nearly 150%.

Those buying opportunities always look easier in hindsight, but they provide a good lesson. If a company has been performing well but the broader market isn't cooperating, that's a time to consider buying the stock, not selling.

When Netflix launched about 20 years ago, it saw more than consumers' rapid adoption of DVD players. It saw an opportunity. The company had a DVD-by-mail service with roughly 1 million subscribers in 2002 when it began trading publicly. Its service was disruptive. (Remember Blockbuster?) And culture-changing innovation has been the streaming entertainment leader's hallmark under CEO and co-founder Reed Hastings, whose leadership team has pleased viewers and rewarded investors. 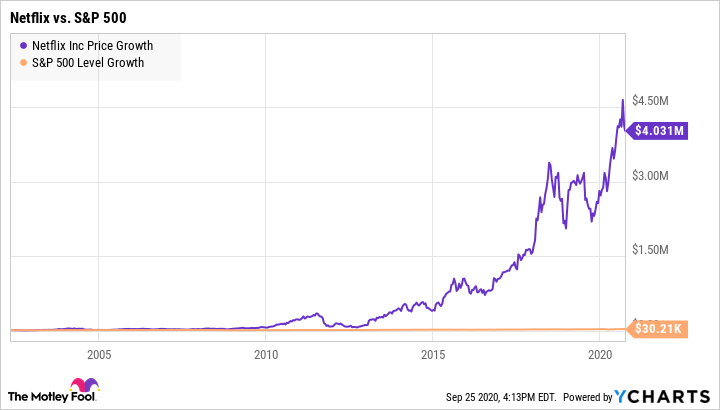 Like Apple, Netflix innovated and grew fast. The company was a streaming pioneer, disrupting its own DVD business (it still exists) with video on demand and original programming that has kept subscriber growth booming. The company has 193 million subscribers in 190 countries.

Subscriptions grew 27% year over year in the second quarter of 2020, when people were looking for stay-at-home entertainment during the coronavirus pandemic. Even before the pandemic, though, subscriptions were rising in the face of increasing competition, from 152 million subscribers in 2019's second quarter to 183 million in 2020's first quarter.

Like Apple, Netflix's stock didn't go straight up. What looks like a relatively small dip in 2011 was actually a 75% collapse. Netflix increased subscription prices and later announced it would split into two companies -- Qwikster for DVDs and Netflix for streaming, a service that launched in 2007. Netflix soon backed off the plan to split the services after public backlash.

Investors who held onto their shares through that huge drop were rewarded. And those who bought shares as Netflix began to recover had a big winner, too. A $10,000 investment at the start of 2013, more than a year after the Qwikster mess, would be worth about $365,000 today.

There are good lessons to learn from these companies.

First, an investment is a partnership with a company's leaders. Jobs rescued a struggling Apple, and current CEO Tim Cook has taken it higher. Hastings saw the future, first with DVDs and then with streaming. Putting investment dollars behind innovative leaders pays off.

Second, when you find a company like that, hang onto it unless the fundamental story has changed. Investors who resisted the urge to sell their shares of Apple and Netflix at euphoric highs or frightening lows have cashed in by holding them.