Investors have some big questions heading into Thursday's announcement.

Investors have some good reasons to follow Kimberly-Clark's (KMB 0.83%) next earnings report. Sure, sales gains have likely slowed since the pantry-stocking frenzy at the beginning of the pandemic. But the consumer staples giant is still growing at a faster rate than before COVID-19 struck, including by winning market share in key categories like diapers and cleaning supplies.

Rival Procter & Gamble (PG 0.31%) isn't going to ignore those threats, and so shareholders might see evidence of a stepped-up competitive response in both companies' reports in a few days. With that bigger picture in mind, let's look at what you can expect to hear from Kimberly-Clark on Thursday, Oct. 22. 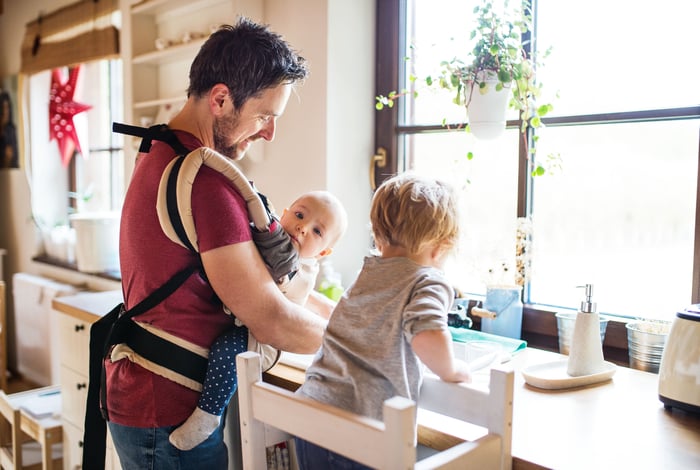 Sales growth in the last fiscal quarter landed at 4%. That result significantly trailed the 6% boost that P&G announced, but Kimberly-Clark still turned in a good overall performance. The company gained market share in most of its selling niches, especially in the core U.S. market. Organic sales there spiked 12%, in fact.

Look for that number to creep back down to the single digits as consumers work through excess pantry supplies through late 2020. But investors will still judge its growth results in comparison to P&G, which reports its earnings results two days earlier. In addition to global gains in the low single digits, shareholders want to see a balance between higher sales volumes and rising average prices. The price boosts reflect competitive strength and new-product launches around premium child care. They're a strong indication of increasing profitability ahead, too.

Management in late July warned investors not to get too used to seeing cash flow surge as it did in the fiscal second quarter. Some of that spike had to do with the timing payments to suppliers and the elevated sales growth around pantry stocking.

But Kimberly-Clark is still on track to improve key metrics like operating margin, earnings, and annual cash flow thanks in part to its aggressive cost-cutting program that's slashing over $500 million from the annual expense burden in 2020. "Financially," CFO Maria Henry told investors, "this should be a really good year for Kimberly-Clark."

Procter & Gamble and Kimberly-Clark each just resumed their financial outlooks as demand settled down from COVID-19. But those forecasts might attract bigger revisions than investors are used to seeing given all the economic growth variables at play.

As it stands heading into these reports, P&G is projecting growth of between 2% and 4% over the next year, and Kimberly-Clark is targeting a 4% to 5% boost in fiscal 2020, which ends in December. Those two metrics aren't directly comparable because of different financial calendars. But any changes to the outlooks will still be a key focus for shareholders.

Kimberly-Clark has been consistently trailing its larger peer in market-share gains while closing ground when it comes to profitability. That formula might be good enough to keep supporting solid investor returns for the stock. But shares won't break out far above the market until the consumer staples giant can prove that it is on a sustainably faster growth pace.